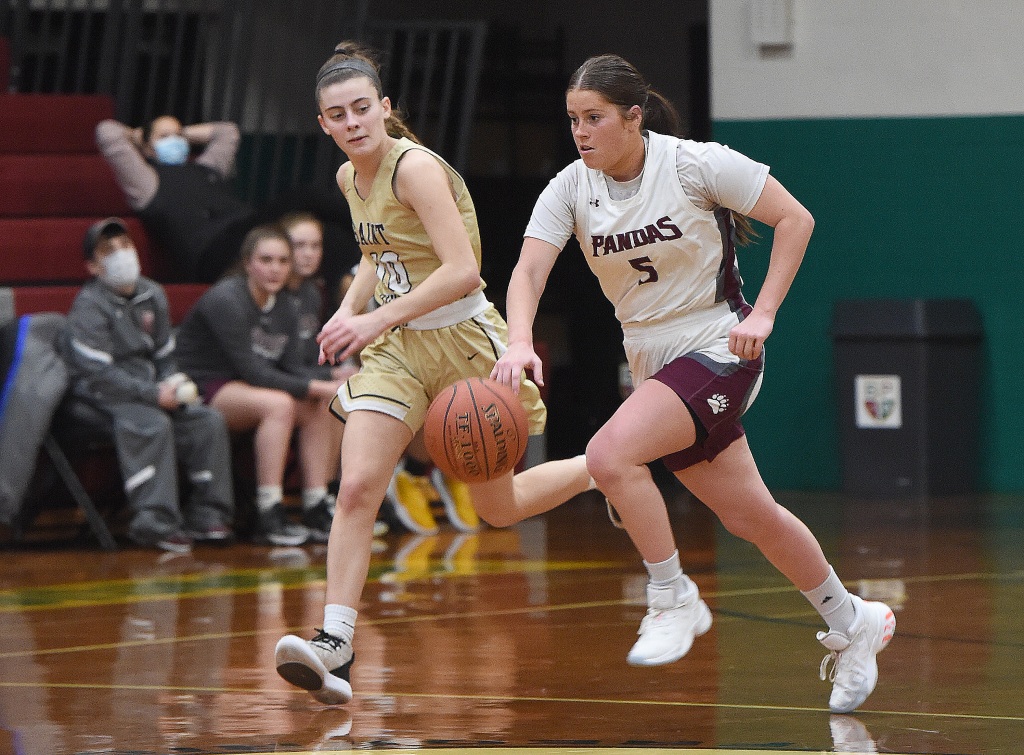 UPPER DARBY — As she lay on the court writhing in pain, Bridie McCann had the worst thoughts in mind.

She wondered how bad her knee was injured, or if she would be able to walk off the floor under her own power.

After a few minutes, with help from her coaches and training staff, McCann hobbled off the court. All St. Hubert players in the game at the time — this was midway through the fourth quarter — came over to wish her well.

With a minute left in the game, McCann walked gingerly back to the Bonner-Prendie bench. The heart and soul of the Pandas, McCann would be OK.

In coach Tom Stewart’s office after the game, McCann shrugged off the injury, showing toughness and maturity (and perhaps a tad of stubbornness).

“Not going to play on Thursday?” Stewart asked.

Stewart grinned. That’s just the answer he expected to hear from a player of McCann’s leadership, talent and character.

“It will depend on how you feel,” Stewart replied.

Once McCann had left his office, Stewart stated the obvious.

“Can’t lose her,” he said. “She’s been so great because the team we are starting, that would’ve been my JV team.”

Bonner-Prendie entered the year missing five of its top six returning players due to a variety of reasons, including season-ending injuries. McCann, one of the best all-around players in a loaded Catholic League, was the only one left. All of the weight of carrying a young and inexperienced team had fallen on the senior guard’s shoulders.

McCann is the lone senior in a starting lineup that includes two sophomores (Riley Donohue and Laila Farmer) and two freshmen (Taylor Eagan and Melanie Standen).

While the Pandas have been up and down at best and are not expected to compete for a league title, McCann has been a star. Last week she had a pair of 30-point performances. In the loss Tuesday night, she scored 20 of her game-high 25 points in the first half and made five 3-point field goals.

“We definitely have a young group this year, so it’s really important for us to keep our heads up and go into each game really strong,” she said. “In the past few years, we’ve always been a strong team and I know we don’t have the same group that we thought were coming back. But again, it’s really important for us to just keep coming out and doing our best at practice and at games, and just coming together. And I do see a lot of improvement from the beginning of the year with all the young ones, so I’m happy to see them getting better and I’m happy to be a leader to them.”

McCann was a big part of two B-P teams that made it far in the PIAA Class 4A tournament her freshman and sophomore years. Last year the Pandas didn’t play in states, but lost by one point to Archbishop Carroll in the Catholic League quarterfinal round. She knows what it takes to compete against the best teams in the area, and her hope is that her experience will rub off on the underclassmen so that they will become better players in the future.

“It’s obviously a big role to take on, just to be a leader to them, and hopefully I can teach them something here and there,” McCann said. “That’s kind of all I want to do at this point.”

McCann also doesn’t want to disappoint Coach Stew, who has been a head high school basketball coach for 48 years and has more than 400 victories on his resume.

Bonner-Prendie’s Riley Donhue connects on one of her four made 3-pointers Tuesday.

“He always tells me that I have to take on a big role,” she said. “I completely take that in and I go out there and try my best to do it. He’s always there telling me to keep my head up because he knows what we’re working with as well.”

McCann hasn’t committed to college but she intends to play beyond this year. She is bound to go somewhere and shine.

“There’s kids who’ve gotten Division I scholarships that she’s every bit as good as,” Stewart said. “Right now she’s not playing with a lot of the kids she thought she’d be playing with. What we’ve dealt with, I’ve never seen anything like it. I’ve called 12 schools, but it’s been hard to get the notice, especially since the pandemic and everything. She’ll get there, though. She’s too good a player not to play in college.”

Cardinal O’Hara 63, Conwell-Egan 27 >> Freshman Molly Rullo produced a career-high 16 points to lead the Lions to an easy win. Maggie Doogan finished with 15 points and Annie Welde scored all of her 12 points in the second quarter.