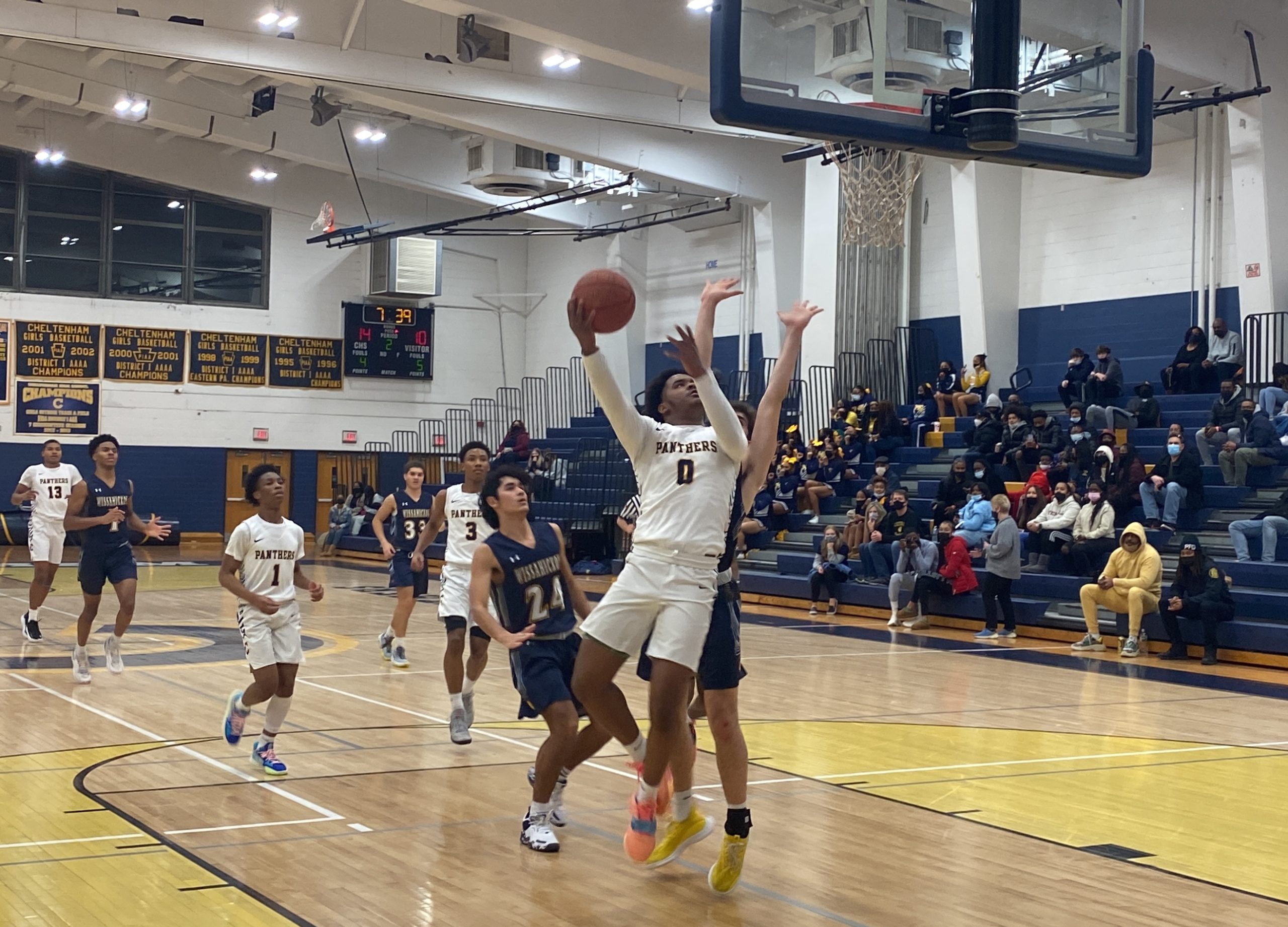 Cheltenham's Rasheem Dearry goes up for a shot against Wissahickon during their game on Tuesday, Jan. 18, 2022. (Mike Cabrey/MediaNews Group)

CHELTENHAM >> Shots were not falling for Cheltenham boys basketball’s Rasheem Dearry Tuesday night – until they did.

“I just got out of my head,” Dearry said. “And basically just it’s basketball, it’s going to come to you. It’s a mental game.”

With the host Panthers trailing Wissahickon by 12 in the third quarter, Dearry finally found a way to put the ball through the hoop – collecting an offensive rebound and taking it into the right corner to knock down a 3-pointer.

The triple was the start of a 10-0 run that pulled Cheltenham back into the Suburban One League crossover contest. And after the Panthers began the fourth down by four, Dearry regained his scoring touch, draining a trio of threes and registering 13 points in the period as Cheltenham rallied past the Trojans and stayed undefeated with a 57-49 victory.

BOYS #BASKETBALL: @CheltenhamAth’s Rasheem Dearry drains a deep 3-pointer from the right wing for a 46-44 lead 4Q vs. Wissahickon. pic.twitter.com/sHl0DKmwwK

“Still played hard, was just kind of in my head a lot,” Dearry said. “Talked to coaches, they said just keep playing, it’s going to come to you. It starts on defense and playmaking. So I just listened to them and it just came to me in the second half with the energy.

“I knew we had a job to do and we had to get it finished so the energy and just playing defense and just coming out strong.”

Dearry and Brandon Bush paced the Panthers (11-0, 7-0 SOL Freedom) with 16 points while Josiah Hutson added with 15 points as Cheltenham outscored Wissahickon 20-8 in the fourth, finishing the game with a 14-5 burst after trailing 44-43 with 5:51 remaining.

“I knew when we had that conversation as to what it’s like to face adversity and then tonight it just appeared,” Panthers coach Patrick Fleury said. “And to be down 12 in the third for sure it’s not ideal but in the long and grand scheme of things it is for us because it’s not always going to be pretty. We’re not going to win games without full energy, effort, communication.”

A Dearry three gave the Panthers a 46-44 lead while Bush’s putback extended the advantage to four. Josh Twersky scored on a scoop shot at 3:44 to get Wissahickon within 48-46 but Dearry drained a trey from the right wing and after the Trojans were called for traveling, Hutson found Dearry with a bounce pass for a layup and a 53-46 lead with 1:08 to go.

BOYS #BASKETBALL: @CheltenhamAth’s Justin Savage with a steal then finishes the fast break with a one-handed slam 1Q vs. Wissahickon. pic.twitter.com/cWIjZ9fPVd

“Our coaching staff just did a great job and in a situation like this, you know they made a lot of different calls and subs and they worked and they’re just great people and the kids fought hard,” Fleury said. “Not always the way that we want it but again Coach Kyle is one of the coaches that obviously has a wealth of knowledge and he’s had a lot of quote-unquote upset wins and he’s just a guy that prepares his guys and they execute the game plan that the come in with.”

After Jaylon Williams connected on a corner three to cut the margin to 53-49, Wissahickon called time out with 53 seconds. The Trojans came up with a steal in the backcourt but Justin Savage blocked a Williams three attempt and Cheltenham worked the ball up to Dearry for a layup to make it 55-49.

“That kid can shoot it,” said Wissahickon coach Kyle Wilson of Dearry. “We knew he could but he just kept stepping back further and further knocking down tough shouts. Give credit ,man, they’re a good, well-rounded team, they know where to put the ball in crucial times and everybody contributes. It was impressive game by them.”

Twersky scored 10 of his team-high 14 points in the first half for the Trojans (8-5, 5-3 SOL Liberty), who dropped their second straight. Williams tallied all 13 of his points after halftime while Earl Stout chipped in 10 points.

“We weren’t at our best in those last three or four minutes,” Wilson said. “And to match the best team in our league, or I’d say on this side of the conference we got to make sure we’re at our best.”

“We are very grateful and obviously happy that we’re at 11-0,” Fleury said. “But that doesn’t mean that we look at it like there isn’t anything that we need to grow on or things that we don’t need to get better or things that we’ve mastered yet cause we haven’t. So our biggest thing is to continue to fight, have the dog in us.”

Wissahickon also has two more games this week, both on the road – a SOL Liberty matchup with Upper Dublin 7:30 p.m. Thursday then at Bensalem 3:15 p.m. Saturday.

“We need to get back on our horse and keep trying to scrap and claw for wins cause these are the games you want, these are the games that make you better,” Wilson said. “I think our guys walk away thinking ‘Hey if that’s the best team in District 1 or second best behind Methacton, hey we’re not far off.’ We got to get wins, we got to finish these games when we have opportunities cause that would of been a huge one for us.”

Savage’s steal and one-handed slam gave Cheltenham a 14-10 lead after the first eight minutes but Wissahickon settled in on offense in the second quarter. Dom Vecchiano scored eight straight points on consecutive 3-pointers then a transition layin off a Twersky outlet pass to put the Trojans up 24-17.

A Stout jumper had Wissahickon leading 28-22 before Kamani Healy’s buzzer-beating jumper after an offensive rebound put the Panthers down four at the break.

The Trojans continued to hold the momentum after halftime, opening the third with an 11-3 run to build a 12-point advantage. Five straight by Williams – including a three-play at 5:32 – had Wissahickon leading 35-26.

After a Savage free throw made it 35-27 at 4:45, Stout got a shot off a drive to fall while Twersky found Williams behind the defense for a layup and a 39-27 lead.

But Dearry collected his first points of the night on a trey while Hutson converted a three-point play then buried a three. A Savage free throw at 1:24 made it 10 straight for the Panthers to cut their deficit to 39-37 before Stout scored on a drive to put the Trojans up four at the end of the third.

BOYS #BASKETBALL: A block by @WissBasketball’s Josh Twersky leads to a Jaylon Williams scoring on a fast break & drawing the foul 3Q vs. Cheltenham. He made the free throw to complete the 3-point play. pic.twitter.com/1Jst7xV2hV

Dearry hit a 3-pointer to make it 41-40 while Hutson scored in transition at 6:25 and drew the foul – completing the three-point play to give the Panthers a 43-41 lead, the hosts first since 17-16 in the second quarter.

A basket then a free throw by Williams had Wissahickon back up 44-43 but after Dearry drained a deep three from the right wing Cheltenham never relinquished the lead.