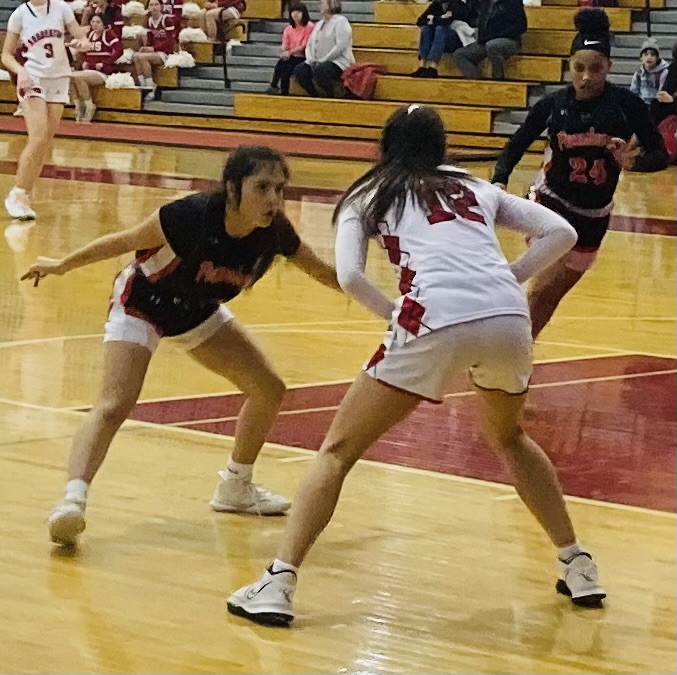 “I still think we can continue to get better,” Big Red coach Lynn Carroll said, “but this was pretty darn good.”

In a battle of Suburban One League heavyweights, Souderton put together an inspired defensive effort and got key contributions from Fenchel and others in raising its record to 10-2 (first in the Colonial at 6-1). The Falcons are now 9-1 on the season and remain 6-0 in the Patriot.

Big Red led by three at the half, extended to a double-digit lead in the third, and then its defense was again there when they needed it, holding off a Pennsbury rally in the final moments.

Souderton huddles during its game with Pennsbury on Thursday, Jan. 13, 2022. (Kev Hunter/MediaNews Group)

“That was team defense, from start to finish,” Carroll said.

Particularly in limiting the dangerous Ava Sciolla, who finished with a game-high 18 points. Big Red held her to just two points in a pivotal third quarter.

“We strive and push for that because if there’s no help defense, you’re not gonna win the game,” Fenchel said. “That’s one of the biggest things in our program that we practice. It’s so huge for us.”

A basket by Teya McConnaha (12 points) and a three by Erin Bohmueller spiked the Souderton lead to 27-19 early in the third. McConnaha hit another three and the lead was at 11.

While the Souderton offense flowed, Pennsbury was stymied, held to five points in the third.

“What Casey Harter is able to do defensively,” Carroll said in particular, “is simply remarkable.”

A drive by Sciolla brought the Falcons within 36-32 in the fourth, but that’s as close as it got. Souderton drained the clock with some effective passing and a layup by Grace McDonough helped lock it up.

Fenchel’s 10 points – all in the first half – sent Souderton on its way.

“If teams think that this is gonna be the Teya and Casey show, and they don’t think we have other weapons, they’re gonna be mistaken,” Carroll said. “Brooke certainly proved that in the first half.

“She hasn’t been scoring a lot – we haven’t been getting her enough shots. She hit some big ones.”

A three by Fenchel and a bucket by Mikayla McGillian provided Big Red a 5-0 jump in the opening moments.

Fenchel had another three in the quarter and a three-point play by Harter helped pace the Indians to a 12-8 lead after one.

Pennsbury huddles during its game with Souderton on Thursday, Jan. 13, 2022. (Kev Hunter/MediaNews Group)

Pennsbury stayed close, with a pair of threes by Nicole Pompili and one each by Sciolla and Daniella McDonald providing a push.

After the Falcons drew to within 12-11, a short jumper by McConnaha and a drive down the lane by Harter extended the Big Red advantage to 16-11.

A drive and score by McDonough gave Big Red a 22-17 lead before Pennsbury beat the buzzer with a basket by Sciolla, making it 22-19 at the break.

Souderton broke it open in the third.

Said Fenchel: “I’ve been struggling to get things going offensively and I wanted to come into this game and have confidence and make big plays because this is one of our biggest games of the season.”