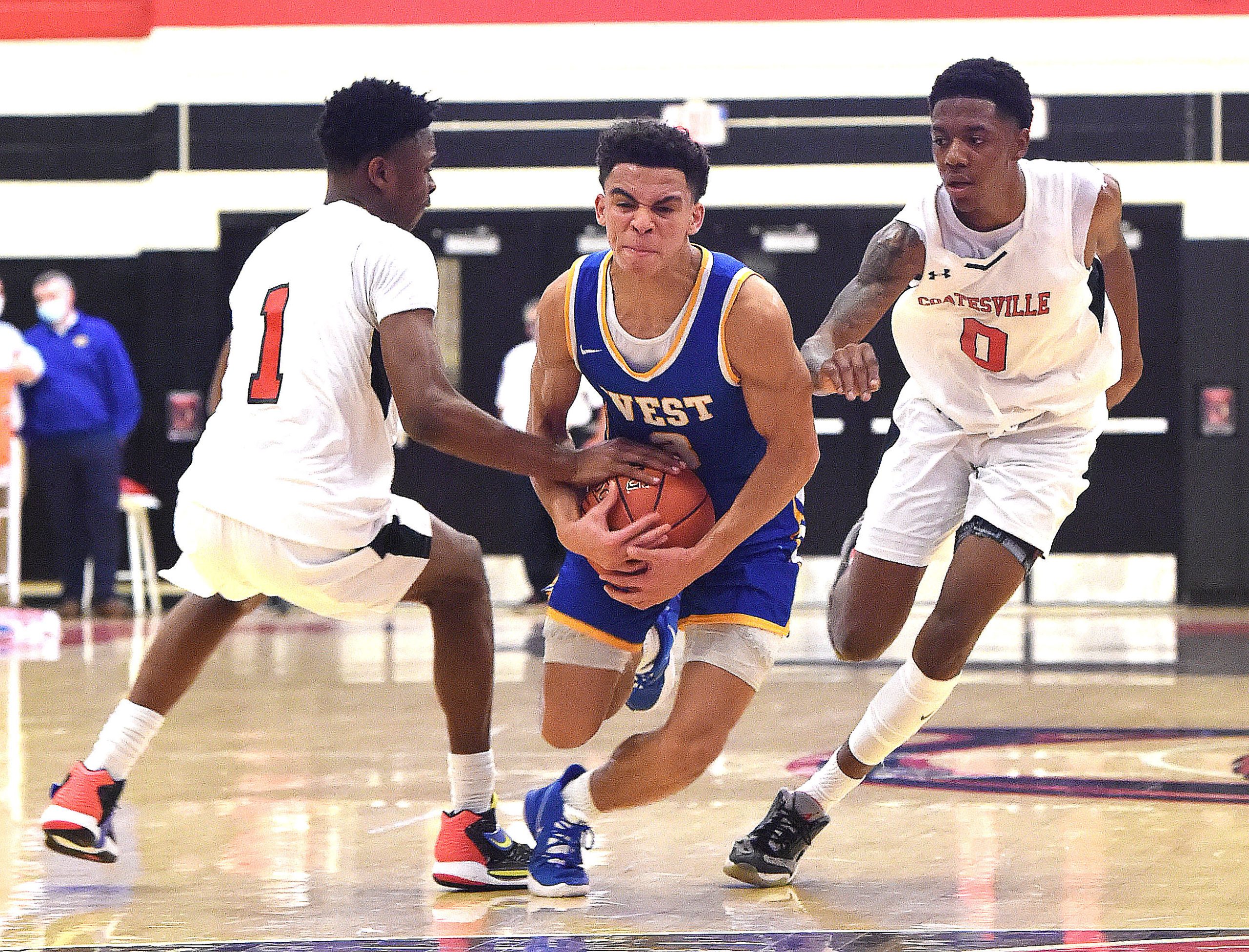 CALN >> Life lessons are all around for high school athletes, and they come primarily from the quest to overcome adversity. On Thursday, the Coatesville boys’ basketball squad had plenty of the latter thrown their way, and they responded positively.

“For kids, sometimes the best thing is to just play the game,” said Ryan Dunbar, a longtime Turner assistant who has assumed the head coaching responsibilities on an interim basis.

Despite a bunch of things swirling off the court, Coatesville still found a way to go out and edge the Red Devils, 72-69, and notched the season’s first league victory in four tries.

“These kids have gone through some adversity the last few days, but they responded,” said Dunbar, who has been an assistant for Turner for 16 seasons. “We talked about playing for each other, and playing the right way – everything coach Turner talks about.

“I thought we finally did it, and when you do that, good things happen.”

The lessons didn’t end there, however. Senior Jaylin (J-Mack) McNeil had a rough outing for three quarters, but the Raiders’ center kept grinding and wound up making a tangible difference by scoring all 12 of his points in the fourth quarter.

“I did play terrible for the first three quarters, and I got in my own head,” McNeil said. “But I stepped up in the fourth. My teammates and coaches were cheering me on, saying that they believe in me.

“When we make mistakes, we can’t put our heads down. We just have to keep pushing harder and harder. We did that and that’s why we won this game.”

For Avon Grove (1-3, 5-7) and head coach Ikeem Mays, it was a prime chance for a rare win at Coatesville, but the Devils ultimately did themselves in with missed free throws and a slew of second half turnovers.

“This was a golden opportunity and just let a few opportunity slip away,” he said. “We know the recipe: we have to make three throws and win the turnover battle – and we lost both of them tonight.”

Clinging to a two-point lead, McNeil keyed the stretch run for the Raiders with back-to-back 3-point plays. He then added an inside bucket for his eighth straight point, and with 3:37 to go, the margin was 62-53.

“For the first three quarters, (McNeil) was down on himself,” Dunbar said. “I thought our guys did a god job picking him up, he stayed the course, and he was dominant in the fourth quarter. He brought home the win for us.”

It wasn’t quite over yet as Devils’ senior forward Tyler Arnold poured in 11 of his 23 points the rest of the way. But Coatesville closed it out at the line, with Jeremiah Marshall going 5-for-6.

“(Turner) has done a good job not only if preparing the kids for games, but also the coaches – especially myself,” Dunbar said. “It’s next man up for the players and it’s the same with us.”

In a first half of runs, the Devils forced a timeout less than two minutes in, and later put on a 20-4 surge straddling the first and second quarters. But the Raiders responded with an early 18-2 rally of their own, and then employed some full court pressure to close strong and take a 33-32 edge into the half.

Senior guard Jaeden Brickus led the way with 17 points, Marshall finished with 14 and Dior Muhammad-Kennedy chipped in 12 for the Raiders.

“We were all pretty shocked when we heard about coach Turner. We had no idea this was going to happen to us. But we came together and realized we have to pick it up.”

Senior forward Tyler Newman led all scorers with 26 points for Avon Grove. But the Devils were 3 of 13 from the line. And 11 of the team’s 16 turnovers came in the second half when the Raiders dialed up the defensive pressure.

“You look at all of the missed free throws, that’s the game,” Mays said. “Three-for-13 is tough to win any game. But our guys fought.

“(Coatesville’s) pressure sped us up and made us play faster than we wanted to, and we made mistakes while playing out of our comfort zone.”