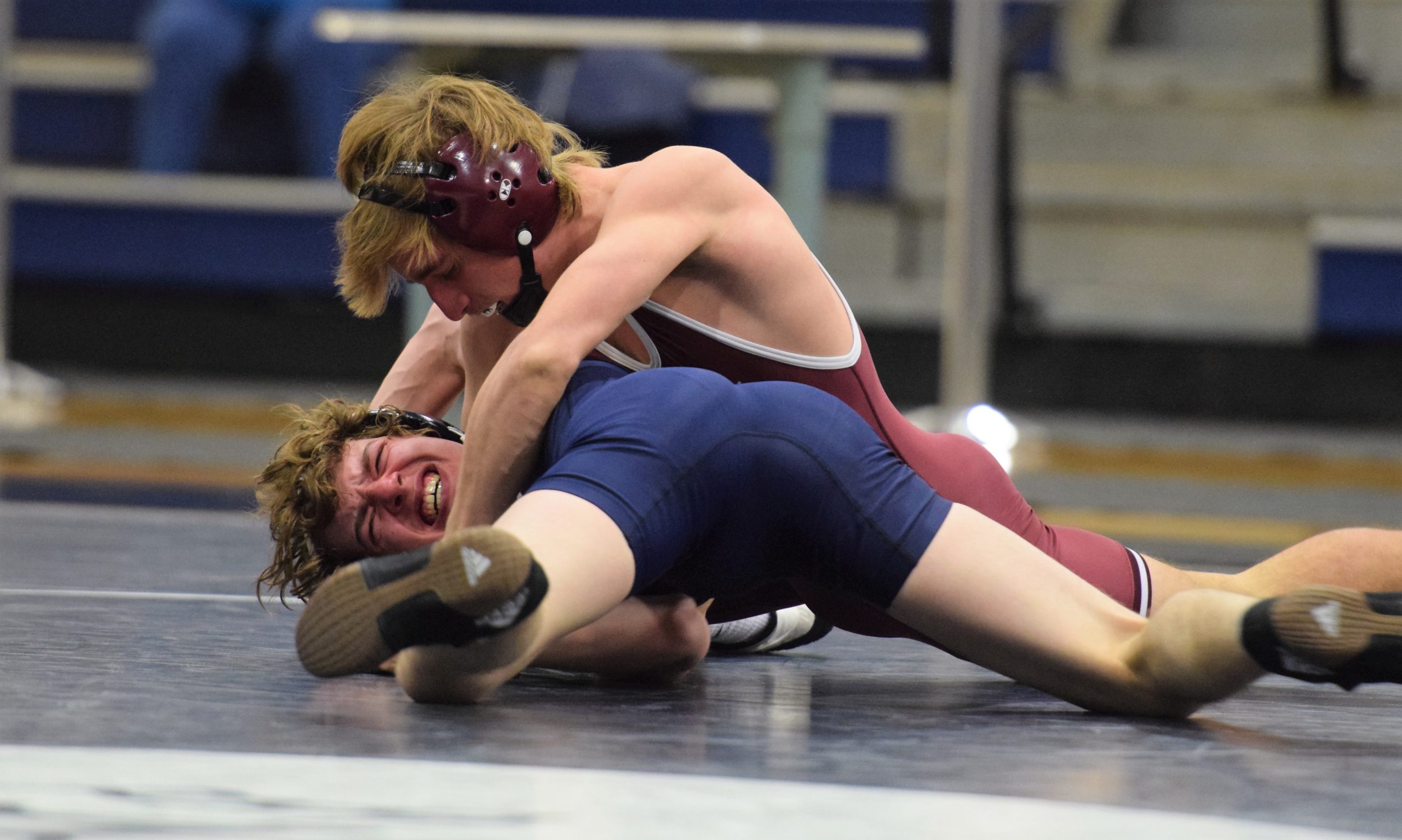 The schools’ wrestling programs have been purveyors of that tradition from the time the districts were configured decades ago.

Their enthusiasm and intensity set the tone for every meeting, regardless of the ultimate outcome of a pairing dubbed the “Border Battle.”

This time around, Pottsgrove came out on the winning side Wednesday by a 42-21 count. But it took a 27-point surge in a span of five middleweight classes for the Falcons to return the “Battle” Trophy to their display case a sixth straight year.

“This is always a big battle,” Pottsgrove head coach Jeff Madden said. “We’re so close, and there are so many connections between the schools. It’s a big focus for us coming in.”

While the early weight classes were impacted by no-shows — two of the match’s three forfeits fell between 172 and 113, with a double-forfeit at 172 — that stretch produced several close decisions. Tyrese Washington got Pottstown on the scoreboard with an 8-7 verdict on Jake Palladino at 189, and Damon Poloway rode a pair of third-period points to a 2-1 win over Trojan heavyweight Jestyn Snyder.

“It was cool we kept it close,” Pottstown mat boss Nick Wade noted. “Our lineup is not where we want it to be.”

Phoenix Rhoads’ defensive pin at 120 pulled the Trojans even with their guests at 120 (15-15) and set him up for selection as Pottstown’s Outstanding Wrestler. But Pottsgrove (2-0 PAC Frontier, 4-6 overall) took charge from there, racking up for pins and a close decision at 132 by Nathan Gillin, named the Falcons’ Outstanding Wrestler for the match.

Gillin, a sophomore sporting a 9-8 record and three-bout win streak, erased Malachi Jones’ initial 3-0 lead with an escape and pair of takedowns. The 5-4 decision got Gillin his first wrestling award at any level of his career, and has him surging from a 2-3 record his freshman year.

“This is a good one to start with,” he said. “I’m picking it up this year, laying on everybody and getting work in.

“I’m hoping to have a better record at the end of the season. It’s been a fun time with a bunch of friends.”

Pins by Bryce Caffrey (126), Trenton Allen (138) and Matt Bechtel (145) — they were all scored in under a minute — helped clinch the team win for Pottsgrove, giving it a 36-15 lead with two weights left to contest. Dominic Sithens closed the Falcons with a second-period fall at 152.

“Trenton has been doing well,” Madden said. “We think a lot of Bryce, Damon at heavyweight and Nate Gillin. The young guys are doing well … they’re very talented.”

Devon Green gave Pottstown a positive cap to the night’s showing with his first-period pin at 160. He ranks as the Trojans’ leader with an 8-3 record.

“I’m glad to see him work his way down,” Wade said of Green, who is figured to be at his intended weight class.

Wade was also cheered by the efforts of Washington and Rhoads on the mats.

“Tyrese, this was the second match in a row he found a way to win,” Wade said. “Phoenix was big scrapping out there.”

The Falcons’ start was secured by Dominic DeMeno (16-3) scoring a third-period pin at 215. Allen, in turn, upped his season mark to 16-5 with his winning performance.

“We should get some guys back,” Madden said. “Right now, we’re going with what we’ve got. We have Lower Merion (home) Friday, and we’ll go from there.”

NOTES >> Alexis Demeter was awarded a forfeit at 113 for Pottstown. That was preceded by Pottsgrove’s Anthony Testa getting a forfeit at 106. … Pottstown’s last Border Battle win was during the 2015-16 season, when it posted a 46-24 score. … The Trojans’ next outing will be Saturday, in the Buckley Duals hosted by Haverford High. … Wade noted he would like to see the “Border Battle” return to the level of past years, when it was staged at the Sunnybrook Ballroom and was the centerpiece of activities by the two communities. “I hope we can ramp it up,” he said.