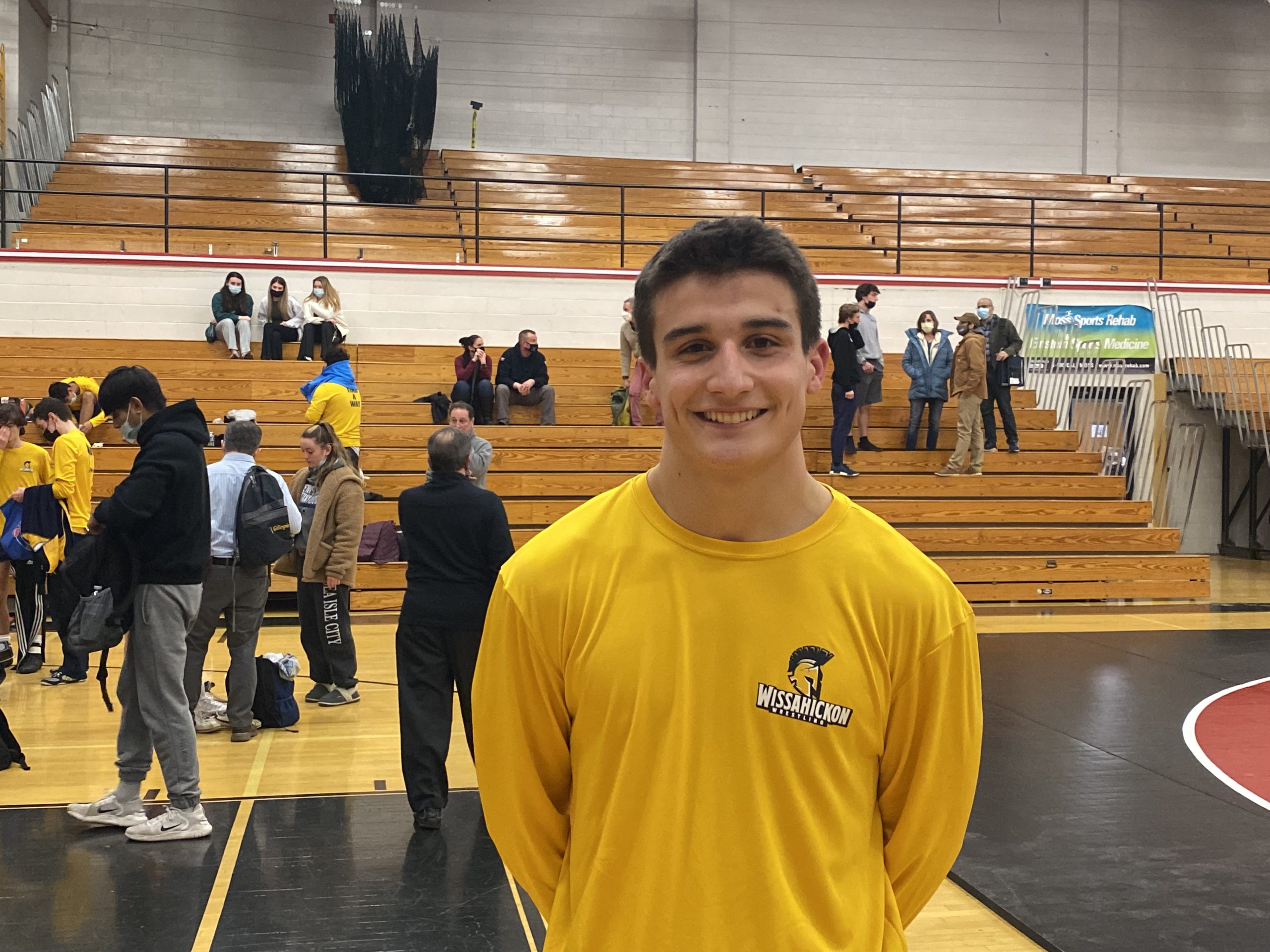 Wissahickon's Nathanael Chez's pin at 172 was one of the Trojans' five as they defeated Hatboro-Horsham 39-36 in their dual meet on Wednesday, Jan. 12, 2022. (Mike Cabrey/MediaNews Group)

HORSHAM >> After building an 8-0 lead in the opening period of his 172-pound match Wednesday night, things got a bit precarious for Wissahickon wrestling’s Nathanael Chez early in the second.

“That headlock – I was not ready for that,” Chez said. “That was a little scary but got out of it, did my stuff so that was good.”

A headlock throw from Hatboro-Horsham’s Brady Pagano had Chez in trouble for a moment, but the Trojans junior avoided giving up points then proceeded to take advantage of the situation. Slipping his head free, Chez collected a takedown and from there worked to secure a pin in 3:05.

“In the room, I wrestle with a lot of guys who do big moves so I’m always ready to get out of it,” Chez said. “And it’s just staying calm. And I know I’m better than that guy so I shouldn’t even been in a position where I can’t fix it.”

Chez’s fall as one of five for visiting Wissahickon in the Suburban One League Liberty Division dual meet, the Trojans’ final two falls at 113 and 120 erasing a three-point deficit and helping them earn a 39-36 victory over the Hatters.

“When I saw the weigh-in, I saw the lineup I thought we had a chance – I didn’t really know that we were going to pull it off to be honest with you,” Wissahickon coach Anthony Stagliano said. “As I saw the weight-ins and saw who the lineup was going, we have a chance.

“Now they’re missing one of their best kids (Christopher) Staub so that factors in, I was missing Joey Connelly so I think that evens out a little because I think they would of kept Hunter Long at 89 against Connelly and then they would have had to forfeit heavyweight. So I think it evens out. But a big win, I’m very, very happy with our team and most of the performances. Good win for us.”

Wissahickon, however, answered with consecutive quick first-period pins by Grayson Ruffner at 113 then Martin Vandegrift at 120 to clinch the win.

“It wasn’t our best performance,” Hatters coach Trent Mongillo said. “It stinks to have a limited lineup, to be understaffed and not a lot of bench wrestlers. It’s difficult to field a lineup. For the whole season we’re not worried about team race or team scores or team matchups, it’s not a team that should of beat us and they did so it’s disheartening but we just got to continue to get better every day.”

The only matches that did not end with a pin were at 138, a Wissahickon forfeit win, and at 160, which saw the Trojans’ Jackson Prince picking up a 9-3 decision over Joe Palmeri to break a 12-12 tie.

Chez followed at 172 by going up 8-0 with a takedown and two near falls in the first two minutes then after the early second-period scare regained control and eventually got the pin for a 21-12 Wissahickon lead.

“I was like well if he’s going to do a big move, I’m going to get mad,” Chez said. “So I got a little more aggressive and worked for my cross-face cradle.”

For Chez, a two-time district qualifier, the win was his seventh in a row – four coming by pin – as he improved to 11-4 on the season.

The Trojans are back on the mat Saturday at Souderton’s Big Red Duals while both teams host SOL Liberty contests 7 p.m. Wednesday – Wissahickon taking on Upper Dublin while Hatboro-Horsham faces Plymouth Whitemarsh.

Evan Prestipino extended the Trojans’ lead to 27-12 as he pinned John Donnelly in 1:05 at 189. But the Hatters finished the upper weights with back-to-back pins, Long winning his match at 215 over Tyler Prince in 1:27 while Alameda-Guzman earned a fall at 3:55 to best Tyler Franczyk at 285.

Allgeier made it three straight pins for Hatboro-Horsham at 106, defeating Matthew Labroli in 1:54 to give the Hatters a 30-27 lead.

“Hunter’s a senior, a lot of matches under his belt here for us so I definitely expected him to do what’s needed of him for the team – get a win, get a pin,” Mongillo said. “Andy Alameda-Guzman is a ninth grader who bumped up to heavyweight tonight. I think he’s an up-and-comer and he’s a kid who last wrestled when he was in seventh grade and took second at SEPA. And he’s got a lot of upside, it’s just a matter of putting it all together.”

But Ruffner put Wissahickon back up 33-30 as he pinned Keith Toll in 22 seconds at 113 with Vandergrift’s victory via fall in 20 seconds against Estrella Acevedo at 120 giving the Trojans a nine-point edge with one match remaining.

In the night’s finale at 126, the Hatters’ Orion Newell won by fall over Nick Aten in 57 seconds.

Hatboro-Horsham’s Carter Murray began the dual meet at 132 by pinning Michael Ross in 3:24.

After a Hatters forfeit at 138 pounds, Grant Dries bested Jayden Dayton at 145 via fall in 47 seconds to put Wissahickon up 12-6. Joe Martini III pulled HH even, pinning Ricardo Garcia in 23 seconds at 152.