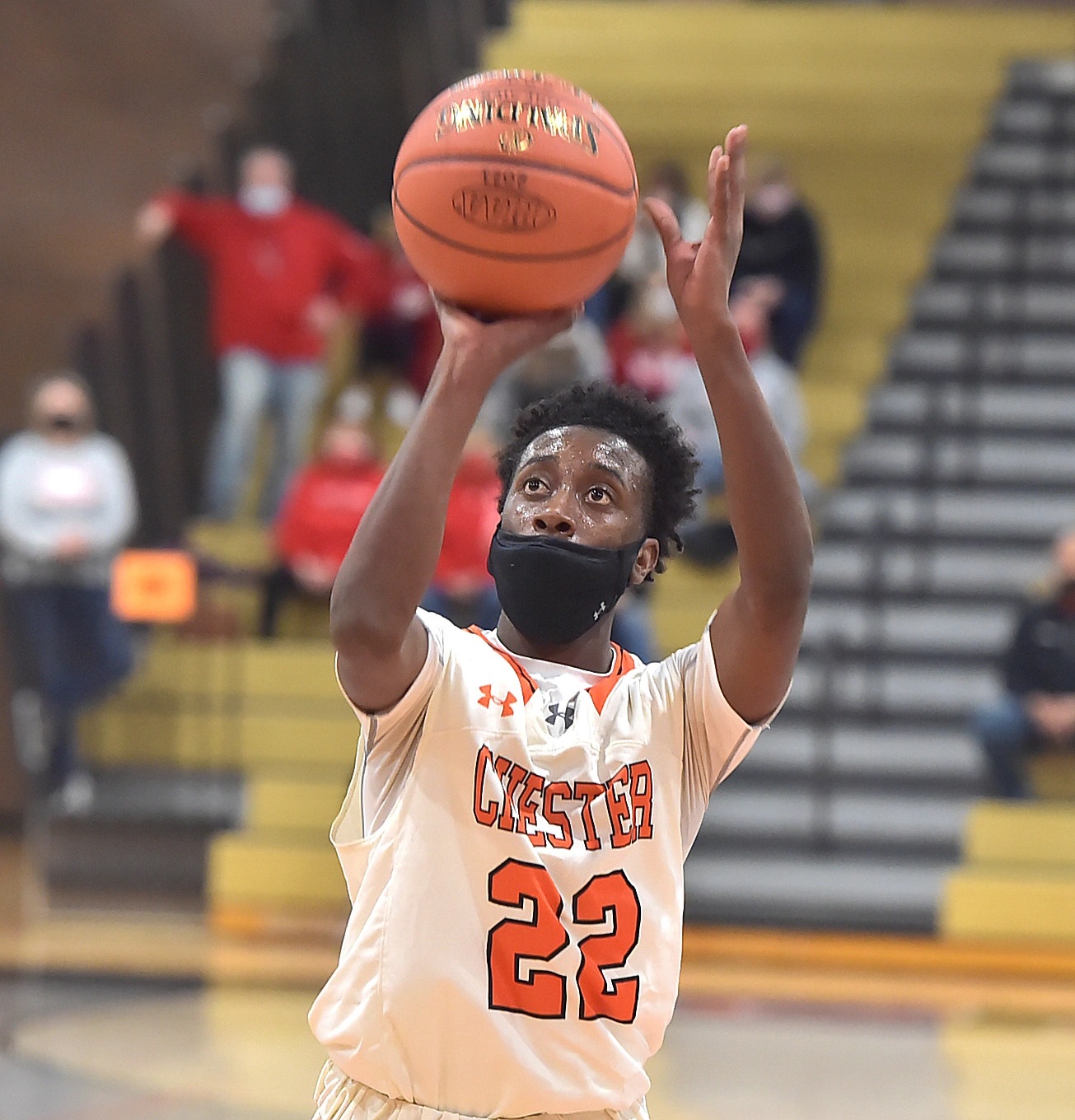 Chester's Kyree Womack, seen in a game last year, was one of four Clippers in double-figures in Tuesday's 70-66 win over Penn Wood in double overtime. (Pete Bannan/MediaNews Group)

CHESTER — Neither Penn Wood nor Chester had much of a blueprint to follow Tuesday night, not for how to recover from the dead stop of a midseason COVID-19 stoppage in what should be a fluid run of January games.

Chester hadn’t been in action since Dec. 19, Penn Wood since Dec. 16. It showed, slightly, early on. Later, however, Qadir Lowrie showed that some things shine through no matter the rust.

Lowrie hit a big 3-pointer near the end of regulation to nudge Chester in front, then he knocked down the two free throws in double overtime that iced a 70-66 win for Chester.

All things considered, the teams didn’t exactly look like they’d been waiting around since before Christmas, unable to even practice for some stretches. The players may have felt that time off, but they didn’t always show it.

“It’s definitely restless, especially for the guys getting out there,” Chester guard Isaiah Freeman said. “Especially early, you could tell. We came out here, we turned the ball over early, we let them hang around and we just were careless with the basketball.”

“It’s hard,” Penn Wood forward Evan Borward said. “We haven’t been working. Over the 20-day break, we haven’t been in the gym. So we came here all tired, not being able to keep our tempo.”

They made up for lost time in a hurry. Penn Wood (2-2, 1-0 Del Val) jumped out of the halftime break as the better side, starting the third quarter on a 15-5 run to open up a tie game. Chester (3-1, 1-0) answered with eight straight points to end the third and make it a four-point game.

Back and forth they went: Penn Wood led 51-47 before Lowrie stepped up. He hit a 3-pointer off a Larenzo Jerkins offensive rebound that led to a Breilynd White cross-court dime with 2:24 left to put Chester up 52-51, then tacked on two free throws to extend it to a three-point edge.

“With two minutes to go in the game, I told the coach I was ready to shoot the ball,” Lowrie said. “I told him, I’m ready, get me the ball and I’m going to knock it down. I was feeling confident the whole fourth quarter. My teammates, they found me and I knocked it down.”

Murray misses the 2md FT, but picks Lowrie’s pocket and Evan Borward lays it in.
54-all, 9.1 left pic.twitter.com/o3KE9I5Apy

Penn Wood wasn’t done, though. Anthony Murray hit one of two from the line, the second leading to a Borward putback to tie the game with 9.1 seconds left. Chester had two looks at the win, but Mekhi Shillingsford delivered one of his 11 blocks on a Kyree Womack leaner in the lane with three-tenths of a second left, and the shot that Jerkins hit off the inbounds play was determined to have been released after the horn.

The first overtime ran a delicate balance: With two teams more effective in the full-court press, the risk-reward of throwing defenders to the ball opened up space behind. Jerkins put Chester up 58-56 with an and-1, though he missed the free throw. That allowed Shillingsford to tie the game, and when Jerkins laid off to Lowrie for a bucket in the lane, Sadiq Fountain answered with a pull-up jumper from 14 feet with eight seconds left to push it to a second extra session.

Chester went up four in the second session, until Fountain nailed a corner triple to make it 67-66. This time, though, Freeman and Lowrie combined to go 3-for-4 from the line to finish it off. On a day where the teams combined to shoot just 27-for-47 from the stripe, Lowrie steeled himself to go 4-for-4.

“It’s nothing new,” Freeman said of Lowrie. “We’ve been playing together since second grade, so we have the chemistry. It’s a shot that I’ve seen him hit before, a shot that I trust him hitting. So it’s nothing new to me. It’s just normal coming from him.”

Lowrie led the way with 17 points, 11 in the fourth quarter and the overtimes. Freeman tallied 10 points and grabbed 15 boards, negating the early advantage that Borward and Shillingsford gained for the Patriots.

“Our thing is, we won’t let them beat us on the glass,” Freeman said. “I’ve never been a big-time scorer, so I have to make myself useful somewhere else. So I know that I can change the game without shooting – if it’s a rebound, it’s an assist, it’s a steal. Being able to have every aspect of the game for me is definitely important, it’s a big role for me on this team along with my leadership.”

No one on Chester was under the illusion that Tuesday was a perfect performance. But it’s a start, even if that start falls in what should be the middle of a season.

“I think we showed that we can play in big-time games and when it matters and it counts,” Freeman said. “It definitely was a big step for us as a team, even in the simple fact that we executed when it mattered. It wasn’t pretty, but we got the win, and that’s all that matters.”

Chichester 56, Interboro 51 >> Maz Sayed scored a game-high 18 points, and Ahkir Keys supplied 11 of his 15 points in the first half to lead the Eagles.

Patrick Brennan led Interboro with 13 points, and Gavin Walls added 12 for the Bucs.