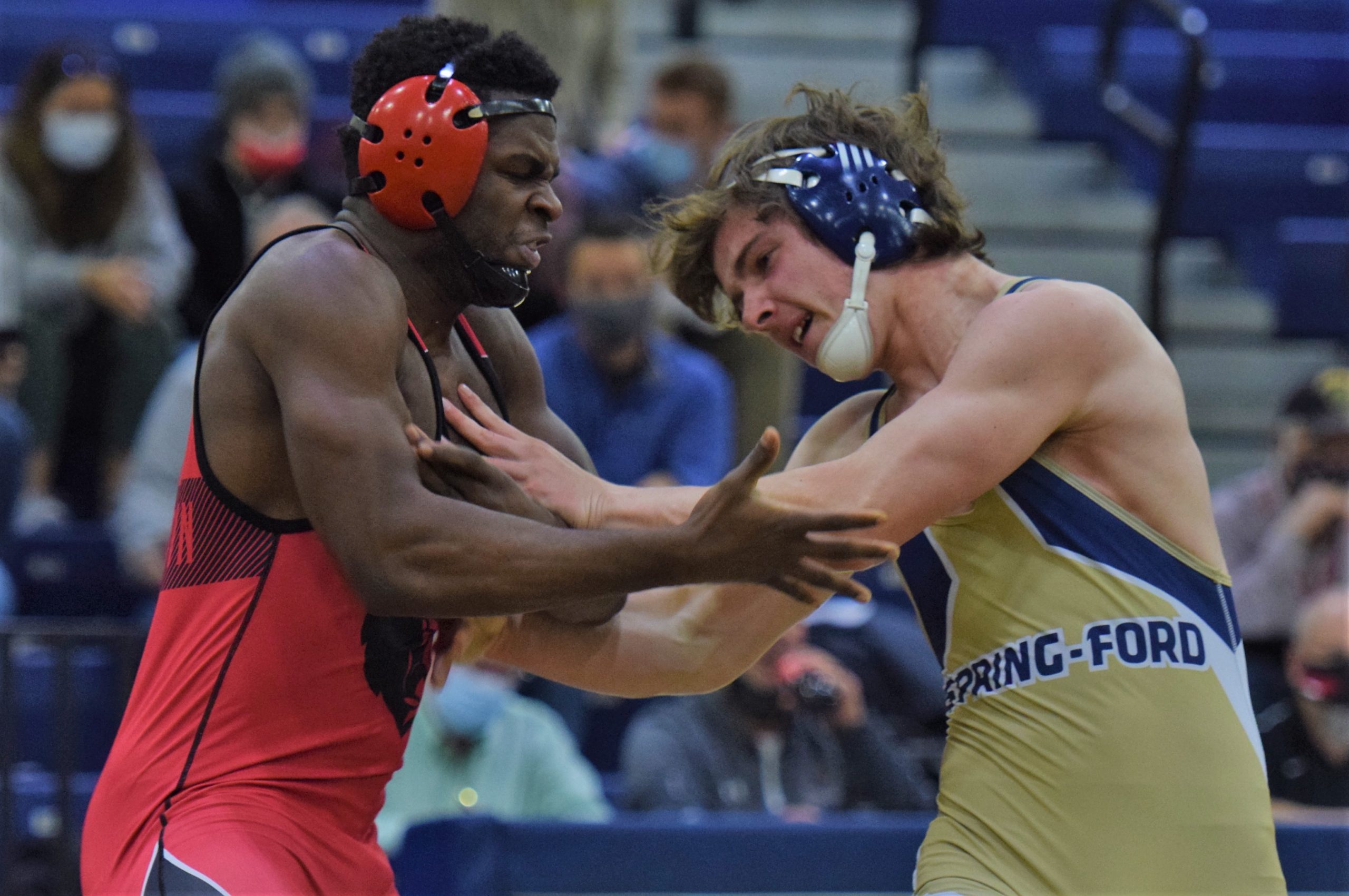 ROYERSFORD >> The lower end of the weight scale has been a strong suit for Boyertown this season.

Spring-Ford showed it’s no slouch in that sector also. In Wednesday’s match with the Bears, the Rams complemented pivotal wins in the upper weights with timely wins at the lower end on the way to a 42-19 victory at the Spring-Ford Ninth-Grade Center gym.

Spring-Ford (1-2 overall), winners of the past two Pioneer Athletic Conference championships, came out of a tough December schedule demonstrating its trademark tenacity and toughness on the mats. It won four weight classes – four of them by pins – to dispatch a Boyertown squad that had compiled a 9-1 dual-match record prior to the start of the new year.

“All through December, the kids worked hard,” SF head coach Tim Seislove said. “We faced good competition. After Christmas, we wanted to see where we are.”

A team that graduated a considerable number of seniors from 2021, among them state champion Joey Milano and state runner-up Jack McGill, took advantage of the opportunity to flex its recently-established muscles. Spring-Ford built an 18-9 lead through the first, and top, six weights, then continued its dominance by winning five of the seven low weights.

Quinn Smith clinched the team win for the Rams with a third-period pin at 132. His fall gave the home team a 36-15 led with two weight classes left to contest.

Along with Smith, the Rams got pins from Kyle Huston at 189 and Dominic Ortlip at 126. They capped the night with Ryan Lepore (8-6) winning by injury default at 145.

Boyertown assistant Dave Jones, speaking for head coach Tony Haley – he was looking into 145-pounder Dominic Sheridan’s medical situation – noted the similarity between the Bears and Rams in their lineup configurations.

The two lightest weights provided two of the more competitive bouts for both teams.

At 106, Gus Smith overcame Brody Coleman’s first-period takedown by pulling off a pair of reversals in the second period, then escaped from a third-period bottom start and scored a takedown en route to a 7-6 decision.

At 113, Cole Smith reversed off the bottom in the second period to come away with a 2-0 decision of Luke Heimbach.

“Gus at 106 … that was a big win,” Seislove noted. “And Cole did a job beating Heimbach, who’s a good wrestler. Those kids wrestled well.”

An even tighter bout occurred at 160, where Spring-Ford’s Anthony Attilio edged Ryan Gehris, 3-2, with help from a first-period takedown and second-period escape. Ryan Horvath followed with a 9-5 verdict at 172, and Huston with his second-period drop that staked the Rams to a 12-6 lead.

The Rams’ first month of action was marked by their participation in tournaments at Cumberland Valley and Bethlehem Liberty, and duals with Suburban One League powers Central Bucks East and Council Rock South. Going into the weekend’s Rockyard Duals at Council Rock North — their schedule features bouts with Central Bucks South and the host Indians — Quinn Smith extolled the significance of the win over Boyertown.

“Teams were looking down upon us,” he said. “But beating District One’s third seed puts us back in the picture.”

NOTES
John Kaputa was awarded a forfeit at 285, boosting Spring-Ford’s lead to 18-9 prior to the lower weights. … Gardner’s 6-3 win at 215 was secured by a four-point flurry in the third period, and despite him being called for two penalty points in the frame.