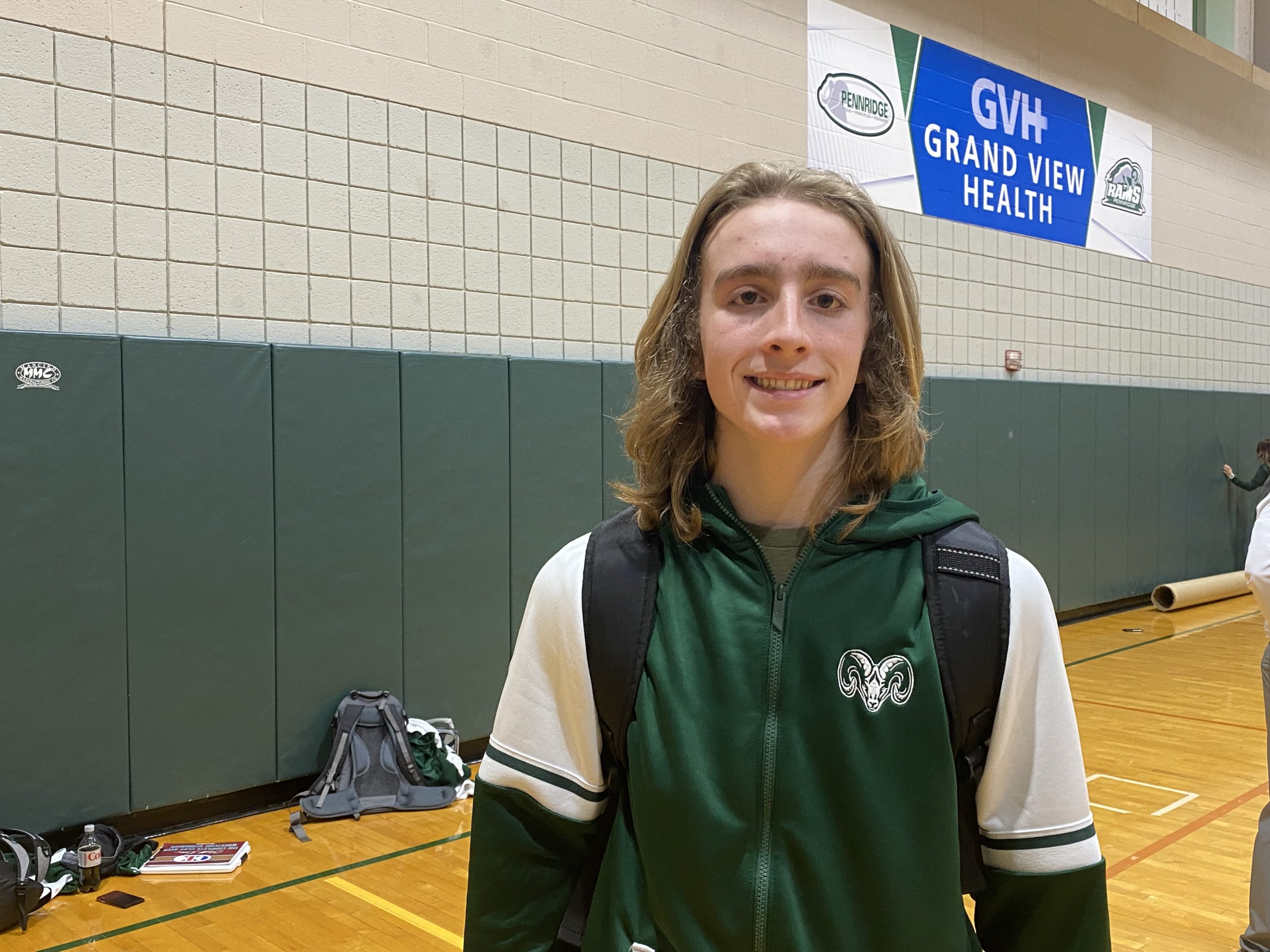 EAST ROCKHILL >> Wednesday night’s dual meet between host Pennridge and North Penn went down to the final match. But the Rams’ Gio Iadonisi put a quick end to the drama.

The junior won his 145-pound match with the Knights’ Will Mayland shortly after it started, registering a pin in just 12 seconds to seal Pennridge’s 42-35 victory in the Suburban One League Colonial Division opener for both sides.

“It felt really good,” Iadonisi said. “I was going in pretty nervous. But once I got on the mat I was pretty ready. I wasn’t expecting to pin him that fast but I guess whatever happens, happens.”

Iadonisi’s clinching pin made it a total of six falls for the Rams (2-1, 1-0 division), who needed to shuffle some of its lineup but found a way to snap a six-match losing streak to North Penn (2-4, 0-1) – earning their first win in the rivalry since besting the Knights 50-24 in the championship final of the Rock Yard Duals in January 2016.

#WRESTLING: Final @PRWrestlingRams 42, North Penn 35. Gio Iadonisi seals the Rams’ win in the final match, earning a pin in 12 seconds at 145. @PennridgeSports with 6 of the 9 pins in the SOL Colonial dual meet. pic.twitter.com/SN6kDygc0m

“Fortunately for us it ended up being where we end on a strong note with Giovanni, he’s a kid who’s wrestled for me for many years, comes out on top,” Pennridge coach Brian Kuhns said. “But this could of went either way just because of the fact that these lineups change so often now. So we constantly tell every kid in the room, we have 38 kids but probably getting 20 kids at a time at practice that everybody – first string through fifth string – has to be ready to wrestle varsity cause you just never know.

North Penn senior William Morrow, who placed eighth at states last season at 145, began the match with a win over Brady McMahon via fall  in 2:35 at 152.

“I think the kid was probably coached to not get pinned, lose the least amount of points so I had to work around that,” Morrow said. “I had to find something to get and I don’t even remember what did I pin him with – it was a cradle so I knew I had to get on my feet and take him down to his back from there because he was just clamming up on bottom.”

#WRESTLING: North Penn’s William Morrow gets a second-period pin at 2:35 to win his 152-pound match vs. Pennridge. pic.twitter.com/JoPRTAvUqW

The Knights also got pins from Nick Ray (172) and Devon Pinkert (285) while Michael Cliver’s technical fall win at 138 cut NP’s deficit to 36-35 going into the night’s final match.

“What surprised me was they had some of their better guys out and that opened the door for us,” Knights coach Robert Shettsline said. “We were not able to take advantage of it. Good match.”

At 145, Iadonisi fought off a takedown attempt then flipped his legs to get on top and collect the 12-second pin.

“He shot in on me and I just wrapped my arm around his head and I just hipped him back over and sat on top,” Iadonisi said.

The result improved Iadonisi’s season record to 3-2 with all three of his wins coming by fall.

#WRESTLING: @PRWrestlingRams’s Riley Cullen with a pin at 1:08 to win his 189-pound match vs. North Penn. pic.twitter.com/DJYqREl4Tg

Both teams are back on the mat Saturday, North Penn hosting West Chester East for a nonleague dual meet at 9 a.m. while Pennridge competes at the Line Mountain Duals.

“We tell them this is a long season, our goal – try to make it into districts at the team tournament,” Kuhns said. “We got to be in the top half of the district and that’s one match at a time. They show up, they work hard, they come to matches excited, that’s all I could as for as a coach is these kids are bringing this energy every day that helps me bring the energy every day when you’re dealing with ‘Oh wow he’s out, he’s injured, he’s not here.’

“So I think we’re kind of getting there. I can’t wait ‘til we’re fully healthy, we get a full room again but the kids that are showing up give us everything they got.”

Ray gave North Penn at 12-6 lead with a pin of Eddie Oprindick in 4:17 at 172 before the Rams responded with back-to-back falls – Riley Cullen finishing his match with Deaglan Budd at 189 in 68 seconds while at 215 Xavier Dantzler beat Caleb Moister with a pin just before the end of the first period.

“Short time left and he rips a headlock,” said Kuhns of Dantzler. “Like you said, these pins were crazy tonight but huge shot for us, the fact that he stepped in there, our 215-pounder rolled his ankle, dealing with some ankle issues so again other kid where we’re like ‘Hey I know you’re only 185, we need a 215, we’re pushing your up, team needs you.’ And man he stepped up for us huge.”

#WRESTLING: North Penn’s Devon Pinkert gets a fall with six seconds left in the 1st period to win his 285-pound match vs. Pennridge. pic.twitter.com/lFs9VChXkQ

At 285, Pinkert pulled North Penn even as he bounced back from Chase Washington’s takedown and near fall to get a pin with six seconds left in the opening period. A forfeit at 106 had the Knights up 24-18.

“Devon had a nice pin out there,” said Shettsline of his junior heavyweight. “We just have to work harder, learn from this experience.”

Cole Coffin had the Rams level after his match at 113, pinning Josiah Thomas at 1:21 while Anthony Granite followed at 120 with a pin at 2:49 over Jaden Stahl for a 30-24 Pennridge advantage.

Forfeits by each team in the next two weights had the Rams up 36-30 before Cliver finished a 16-1 tech fall over Andrew Minko with a near fall late in the third.

After Morrow began the dual meet wining via fall at 152, Talen Hogan posted Pennridge’s first pin at 160, topping Brayden Shannon in 1:34 to make it 6-6.