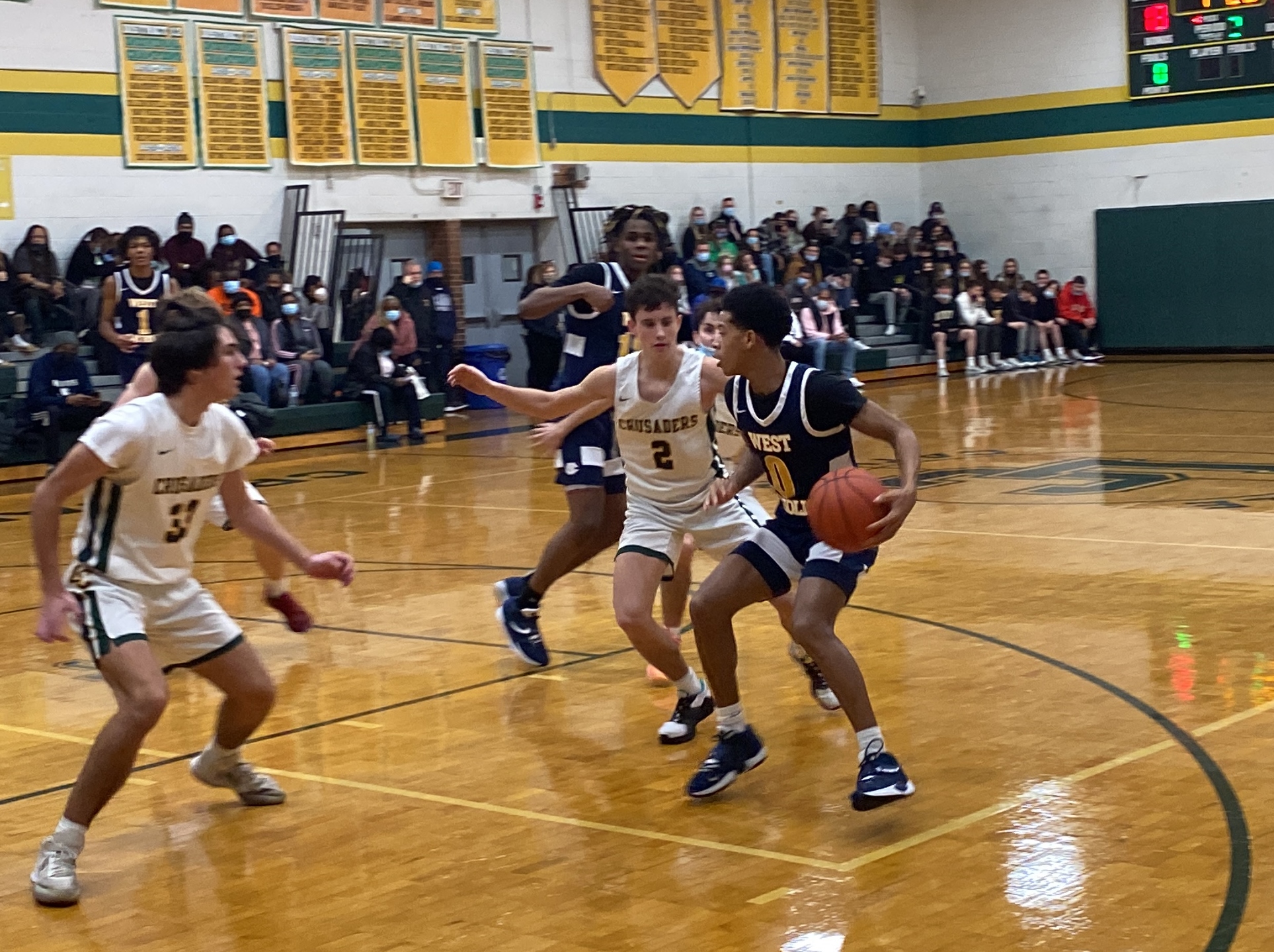 LANSDALE >> With West Catholic’s constant pressure it seemed to Lansdale Catholic boys basketball coach Joe Corbett that the Burrs had a numerical advantage on the court Monday night.

“It’s almost like you’re playing six-on-five,” he said. “With their length and their strength and their athleticism, I mean it’s like they’re doubling the ball and we still can’t get anybody open.”

West Catholic’s defense proved too much for the Crusaders, forcing turnovers that fueled a strong start for the visitors as the Burrs rolled to an 80-34 victory in the Philadelphia Catholic League opener for both sides.

“We just want to win our league. We don’t want to lose – we just want to go undefeated,” West Catholic senior Kareem Watson said. “Our seniors, they’re set, they’re going to college so I think the only thing that’s on our mind is just winning. Today we came into this game we just wanted to start off on a good note.”

Watson, who has committed to Cal State Bakersfield along with his twin brother Kaseem, was one of five West players to score in double figures, collecting 13 of his game-high 16 points before halftime as the Burrs (6-0, 1-0 league) blew open the contest with 19-0 run to take a 37-9 lead in the second quarter.

“They’re a very good team and we knew that coming in. And they’re as good as advertised,” Corbett said. “They were physical with us, I don’t think we did enough things that we like to say that we do well. We didn’t transition defense well enough, we didn’t box out well enough. But credit to them, you right that is life in this league. And we played one of the better teams and I just thought we’d be a little more up for the challenge than we were.

Shemar Wilbanks-Acqui scored 10 of his 12 points in the first half, Adam Clark and Zion Stanford both added 11 points while Marcus Branker Jr. had 10 points for West Catholic, which led 44-18 at halftime.

“We just wanted to come in here and make sure that we handled business,” Burrs coach Miguel Bocachica said. “I tell them all the time I don’t really care about the score, I care about what we look like and that’s what today was. Just come in here, handle business, make sure we’re doing things the West Catholic way and I think we did that for the most part tonight.”

Liam McDonnell connected on a trio of 3-pointers in pacing Lansdale Catholic (2-7, 0-1) with 11 points while Jake Coonahan chipped in 10 points.

“That was good to see because with Brandon (Thompson) out we really need someone to step up,” Corbett said. “Jake’s been scoring the ball for us really well but we need a second scorer and Liam looked aggressive. It looked like he’s kind of seeing that he might have to step up and be that second scorer.”

West Catholic had to navigate through a few game cancellations in December but got in five and won each of them, including rolling past Plymouth Whitemarsh 64-37 Dec. 30 at Widener University in the Pete and Jameer Nelson Classic.

“Teams backed out because of COVID or we couldn’t play in a certain event because they only had one game available versus three games so there was all types of stuff going on,” Bocachica said. “We just tried to weather the storm. It was a lot like last year which was disappointing, we thought it would be nothing like last year but I just kept saying ‘We been there before, we’ve been here before, we’ve been here before.’

“So, you know, we kept our head down, kept working in the gym and when opportunities came and games came we didn’t take them for granted. And I think we’ve just done a good job of handling business. So I just think they’re grateful to play.”

The Burrs’ 6-4 mark in the PCL last season was their first winning record in the league since going 10-6 in 2008-2009 per tedsilary.com. This year’s West side is out to contend for the program’s first Catholic League crown since 1959.

Lansdale Catholic, which has lost its last two since a 41-35 win over Notre Dame (N.J.) Dec. 28, stays in PCL play when it visits Devon Prep 7 p.m. Wednesday. The Crusaders then host Father Judge 3 p.m. Sunday.

“We’ve been getting better,” Corbett said. “We had a nice week last week, we won against Notre Dame in Jersey – that was a good win for us – and we played really well against Constitution and that’s what I told them after the game is the tough thing about this league is if you’re not mentally strong it’ll make you think that you’re not improving. And that’s what I told them is we are getting better, we just ran into a buzzsaw tonight.”

Lansdale Catholic held the lead once Monday at 2-0 after Coonahan’s two technical free throws to open the contest. A Cole Meehan basket had LC even at four but West went up for good with a 9-0 burst capped by two Branker Jr foul shots making it 13-4 at 3:32.

“I just liked our energy,” Bocachica said. “They’re kids so sometimes kids walk into games thinking that they’re already going to win a game and that brings your energy down. So for us, I just think getting off to a good start and getting off to an energetic start.”

McDonnell’s corner three of a James Juarez assist had the Crusaders down 18-9 but the Burrs recorded the first quarter’s last seven points – Wilbanks-Acqui connecting on a trey, Stanford putting back his own miss while Kareem Watson scored off a steal for a 25-9 advantage.

The Burrs began the second quarter with 12 straight points. Kaseem Watson’s dunk on a baseline drive made it 31-9. After baskets from Branker Jr. and Wilbanks-Acqui, Kareem Watson threw down a one-handed slam off a Wilbanks-Acqui steal for a 37-9 lead.

McDonnell’s pull-up jumper and a Luke Hoffner basket had LC down 40-18 before a Stanford alley-oop dunk from Adam Clark and two from Branker Jr. off a baseline drive had West up 44-18 at the break.

The Burrs extended the margin to 61-26 at the end of the third.

A YEAR TO REMEMBER: A look back at 2021 in the Reporter/Times Herald/Montgomery Area
West Chester East’s defense stops Avon Grove