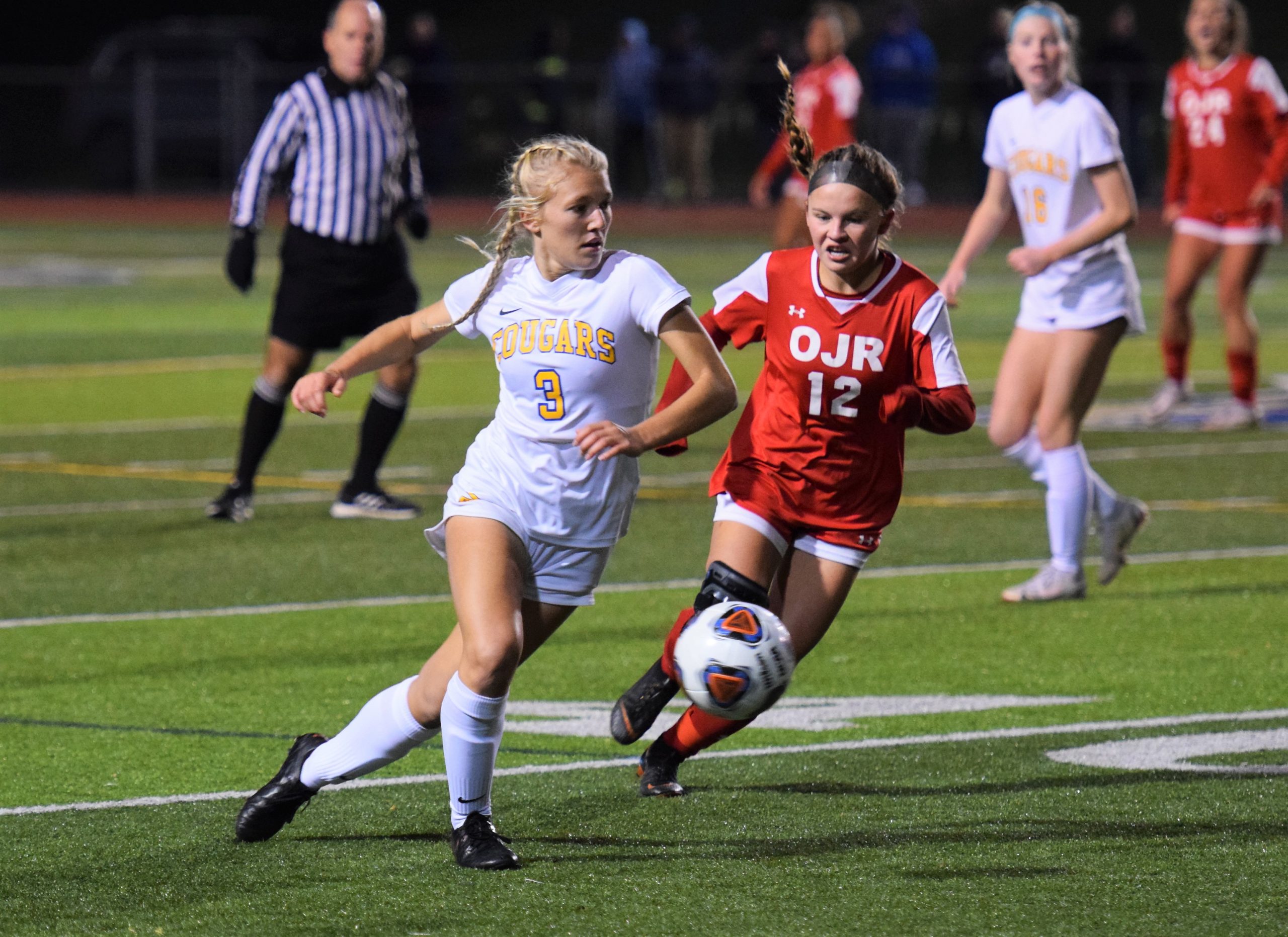 F — Ava Minnier, Sr., Downingtown West — The senior missed the early part of the season while recovering from surgery. When she came back, she didn’t miss a beat. Minnier had 19 goals in 15 games. The first team All-Ches-Mont member was also named to the Under Armour Eastern National squad. “Ava is a presence on the field. Gifted with size, touch on the ball, and a high soccer IQ, she is creative in space and tough to defend,“ said coach Meghan Brogan. “The success she has had this year is a testament to her work ethic and love of the game. It was a pleasure coaching her.” Minnier committed to Penn State.

F — Caroline McDonald, Sr., Downingtown East — The senior formed one of the best scoring tandems in the area with Maddison Shumate. McDonald notched 15 goals and five assists. “Caroline is a fast strong forward who could play with her back to the goal, get by defenders and rocket a shot by keepers from 25-yards out,” said coach Jason Luzak. “Her attacking presence and tenacity around the goal will be missed.”

F — Madison Shumate, Soph., Downingtown East — Just a sophomore, Shumate will be around to terrorize area defenses for two more years. She racked up 17 goals and seven assists. “A technically gifted soccer player who put in the work every training session honing her skills to make a positive impact on the field,” said coach Jason Luzak.

F — Maggie Peterson, Sr., Great Valley — One of the most talented and versatile players in the area. Peterson is a terror up-and-down the wings who has been a scoring force the minute she stepped on a high school soccer field. “Maggie is very fast and skilled with the ball at her feet,” said Great Valley head coach Jen Michewicz. Peterson was named the MVP of the American and an All-State selection.

M — Jules Muntz, Sr., Unionville — One of the better holding midfielders in the area, the senior never seems to tire and is one of the key members for a stingy Unionville defense. She can also move up in attack and can deliver a teasing ball into dangerous areas.

M – Lindsay Krafchick, Sr., West Chester Rustin — A mainstay for the Golden Knights for years, Krafchick is a crafty midfielder who was the offensive enging for Rustin. Krafchick was runner-up for the American Division MVP and earned All-Southeastern Pa. honors.

M — Kaitlyn Wolfe, Jr., Villa Maria — Wolfe, one of the captains for the Hurricanes, was just over a goal a game this season with 21 tallies and 20 assists in 20 games. She was second on the school’s list for most goals in a season. “She has excellent speed with the ball at her feet and possesses a cannon of a shot with either foot. Her accuracy and weight of pass is exceptional helping her reach the 20 assist mark in a season,” said coach Gary Christopher. Wolfe verbally committed to Penn State.

M — Becca Miller, Jr., West Chester Henderson — The junior was one of the key components in midfield for the Warriors. She recorded 12 goals and added nine assists while being a first team All-Ches-Mont National selection. “Becca is a complete player,” said coach Craig Scangerella. “She plays both sides of the ball with speed and strength. Her vision in the midfield while in possession makes her a dangerous playmaker.”

D — Maddie MacDonald, Sr., Avon Grove — A repeat member of the All-Area first team, McDonald is a defensive midfielder who drew the assignment to mark the other team’s top midfielder. Despite that, she also found a way to contribute offensively with five goals and eight assists.

D — Haleigh Wintersteen, Sr., Conestoga — A physical defender who was the linchpin of the state runner-up’s defense. She was also a set piece specialist who was strong in the air, clearing the ball and scoring on corner kicks. The first-team All-Central League member will play her college soccer at Misericordia University.

D — Nicole Prendergast, Sr., Downingtown East — The leader of a defense that recorded 16 shutouts. Proved her durability by logging the most minutes on the team. “Nicole is a team leader who is an excellent communicator who took responsibility for organizing the team on and off the field. Her energy and positivity will be tough to replace,” said Luzak. Prendergast also added a goal.

D — Abby Mills, Jr., Avon Grove — Mills was the key defender for the Red Devils. “Intelligent central defender in a three-back system who helped organize a defense that had 12 shutouts,” said coach Joe Herman. She also added a goal on the season.

D — Gillian Yonce, Sr., Great Valley — The first-team All-Ches-Mont American Division selection, the senior was a steady as an influence in the back as Peterson was up front. She can also play in the midfield. Her distribution from the back is accurate and able to get the Patriots into dangerous positions quickly.

G — Sydney Slusser, Jr., West Chester East — The junior recorded 135 saves with 10 shutouts. She allowed 14 goals in 20 games. “She is a junior and was our captain this year,” said coach Shannon Mueller. “We made it to the second round of districts and her unwavering commitment, strength, and determination played an integral role in to us making it that far.” Slusser was a first teamm All-Ches-Mont, All-Southeastern Pa. and All-State selection.

The Pioneers were expected to take a slight step back after major losses following 2020’s shortend season. But Wilson and his team was undeterred. They finished 12-3-2 on the regular season, second in the Central League. In the Class 4A district tournament, the Pioneers posted shutouts in the first two rounds, before falling to Owen J. Roberts, 1-0. They placed third after beating Pennridge, 3-1.

On to states, where the formula of airtight defense and timely scoring proved successful again. A 2-0 victory over Central and a win over Pennridge in penalty kicks set up a semifinal date with Downingtown East.

The Pioneers kept the Cougars off the scoreboard

“I am just really proud of what this group achieved,” said Wilson. “On paper, I think outsiders and maybe our own players as well may not have expected to go as far as we did having graduated some of the attacking players we did in 2019, but what it showed is that the standard of our squad has continued to raise over the years (along with continuing to have some star players) and we can expect to always be pushing for state championships.
“Winning this award is just a really big honor, and in times as difficult as these to maneuver through in everyday life it is a nice “pick-me-up.” Really all the credit goes to the players though. This year’s squad was full of experienced players who were used to winning, lots of technical ability, lots of speed, lots of skill, and they played hard for each other which is all any coach can want.”

Daily Local News All-Area Player of the Year Abby Klebe had a glowing review of playing for Wilson.

“He’s an amazing coach,” said Klebe. “If we make a mistake, he let us figure it out.”