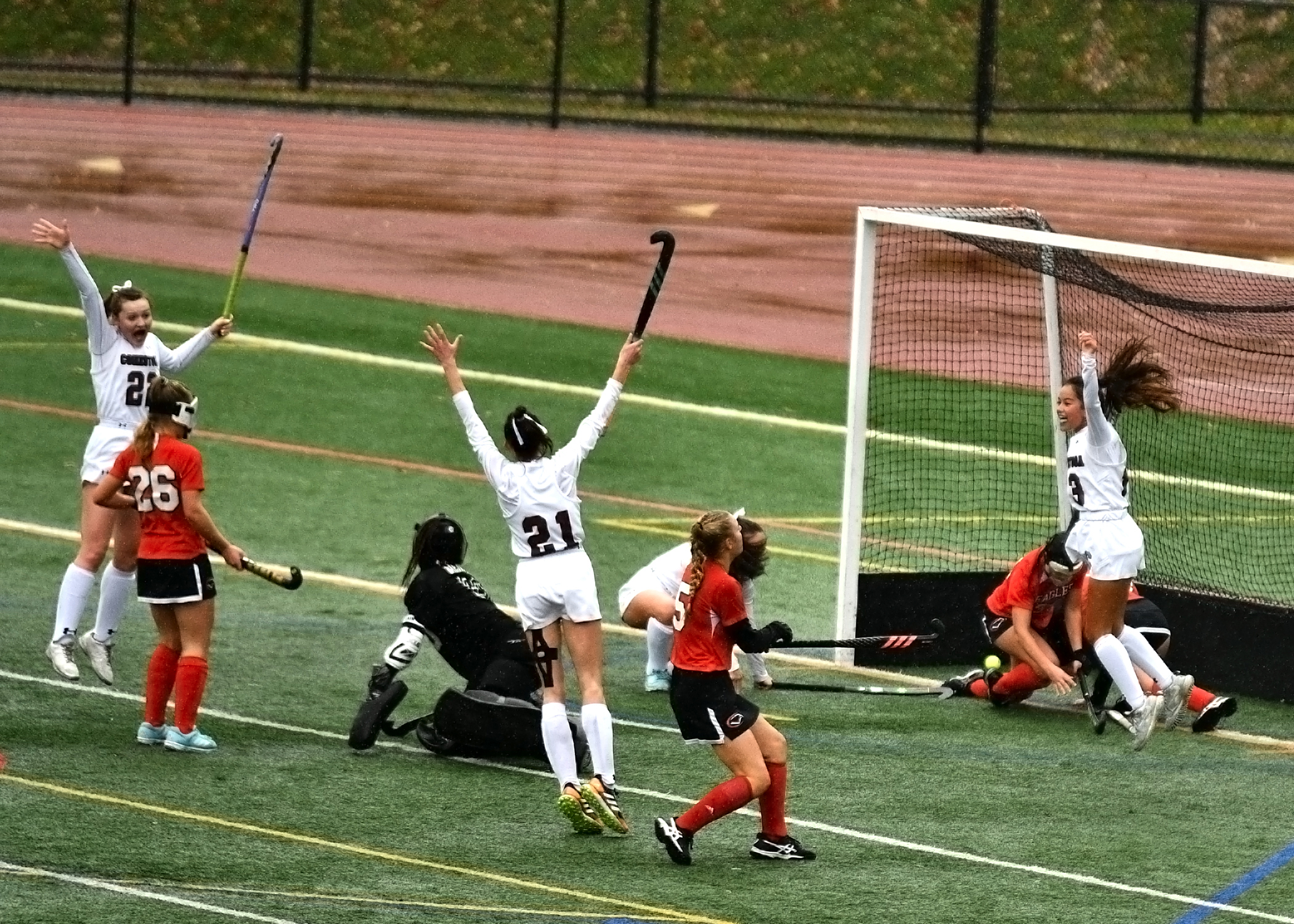 Chester County has long been known as a hotbed of field hockey prowess, and the 2021 season further cemented that reputation. Of the 13 PIAA teams in Chester County, eight qualified for post-season play. The county supplied four of the seven state qualifiers from District 1 in class 3A—Conestoga, Downingtown West, Great Valley and Kennett—along with Villa Maria in class 2A.
Conestoga ran through its Central League season unbeaten to return to the top spot in the conference, topped rival Garnet Valley to capture the District 1, Class 3A title, and reached state semi-finals—a program best—before falling to eventual state champ Emmaus when their post-season transfer from the Hill School scored two of the three goals in a 3-1 defeat of the Pioneers.
In the Ches-Mont, Downingtown West once again captured the National division title, running the championship streak to six years since Downingtown East won the division back in 2015. In the American, Great Valley opened its season with a loss to Conestoga, and then won 14 of its final 15 regular season games to capture the crown. The only other team to beat the Patriots in the regular season? West.
Villa Maria won yet another AACA title, earning the crown with a win and a tie in the regular season against Gwynedd Mercy. Gwynedd Mercy, the eventual state runner-up, got the best of the Hurricanes in the post-season, edging Villa in the class District 1, 2A title game.

Over the course of the last decade, Conestoga has been one of the top field hockey programs in Chester County, bringing home a slew of Central League titles, and making deep runs in the District 1 tourney.
This past season, under the guidance of third -year Coach Regan Marscher, the Pioneers reached new heights, and look like a team that will just keep getting better.
During the season, the Pioneers lost just twice, both to Nationally ranked teams. Playing in the MaxField Hockey National Invitational, Conestoga dropped a close one to Oak Noll, a New Jersey state champ who finished ranked 11th in the nation. The only other defeat came in state semi-finals, when Emmaus, boosted by a top-notch post-season transfer from the Hill School, ended the Pioneers season. The Hornets went on to win the state championship, and wound up ranked No. 1 in the country.
Between those losses, ‘Stoga rang up 11 straight victories, finishing the season 22-2. Along the way, the Pioneers won the Central title, the District 1 Class 3A championship, and, with two wins in the state tournament, reached the semi-finals for the first time in 33 years.
“This was a great group of girls,” said Marscher. “They all play for different local club teams, and it was just so much fun to watch them come together to create such a family atmosphere at Conestoga. I feel bad for the seniors that it eneded under the circumstances it did, but I’m really looking forward to seeing what the girls coming back can achieve.”

Nadia Nemeth, So., Great Valley—A team player with the heart of an athlete, Nemeth was an asset for the Patriots in every way. Nemeth led the team in both goals and assists, notching 38 goals, along with 22 assists on the season.

Lindsey Roberts, Sr., Villa Maria—Roberts, who will continue her field hockey career at Ohio State, is an unselfish player with an uncanny ability to draw defenders while opening up passes to the other forwards. Despite missing a chunk of the season to injury, Roberts accounted for 25-percent of Villa’s assists, with 19, to go along with 14 goals.

Annie Shaw, Sr. Villa Maria—More often than not on the receiving end of those Roberts’ passes was Annie Shaw. Shaw found the back of the cage on 32 occasions, one-fourth of the Hurricanes’ total, and assisted on five others. Shaw, an American University recruit, scored at least one goal in 18 of the Hurricanes’ 24 games.

Gia Whalen, Jr., Villa Maria—Whalen’s credentials in the field hockey world are nearly unmatched locally. A member of both the U16 Junior National Team and the U16 Indoor Junior National Team, Whalen’s distribution skills are exceptional. In her defensive center mid role for Villa — she built a lot of attack from the backfield, stabilizing the defense in the process. Though still an underclassman, Whalen is already committed to play at the University of Iowa.

Shae Wozniak, Fr., Conestoga—Only a freshman, Wozniak showed skill beyond her years over the course of her first-season of varsity hockey. The Pioneers’ primary stroker, Wozniak had six games with two or more goals, finishing the season with 21 goals and 13 assists.

Caroline O’Brien, Sr., Villa Maria—The Hurricanes’ go-to striker on corners, O’Brien is a well-balanced, unselfish player. Shunning the spotlight, O’Brien is as happy to dish off to a teammate as she is to take the shot on her own, which she is surely capable of doing. O’Brien, committed to play for Wake Forrest, had 16 goals for the season, and chipped in with another 15 assists.

Gianna Jaszczak Sr., Downingtown West—A fixture of the Whippets’ defense at right back, Jaszczak was a key player on corners, as well as in transitioning the ball out. Jaszczak, who was credited with a whopping 10 defensive saves, plans to join older sister Claudia at West Chester University.

Lily Wolfe, Sr., Conestoga—A rock on the right side for the Pioneers, Wolfe was one of Conestoga’s captains this season. Thanks in no small part to Wolfe’s efforts; the Pioneers had nine games where the opposition did not get off a single shot on goal. Wolfe will play at Qunnipac next fall.

Sarah Burns, Jr., Kennett—The Blue Demons lost just twice in the regular season (Garnet Valley and Great Valley), thanks largely to and incredibly stingy defense, anchored by Burns. With quick footwork, cunning stick work and poise under pressure, Burns was credited with six defensive saves. She scored once, and had three assists on the year.

Maddi Sears, Jr., Kennett—Despite her small stature, Sears came up big in the cage for the Blue Demons. Athletic with an explosive reaction time, Sears was a major part of why the Blue Demons qualified for states this season. A starter since freshman year, Sears allowed just 13 goals this season, for a 92-percent save percentage.