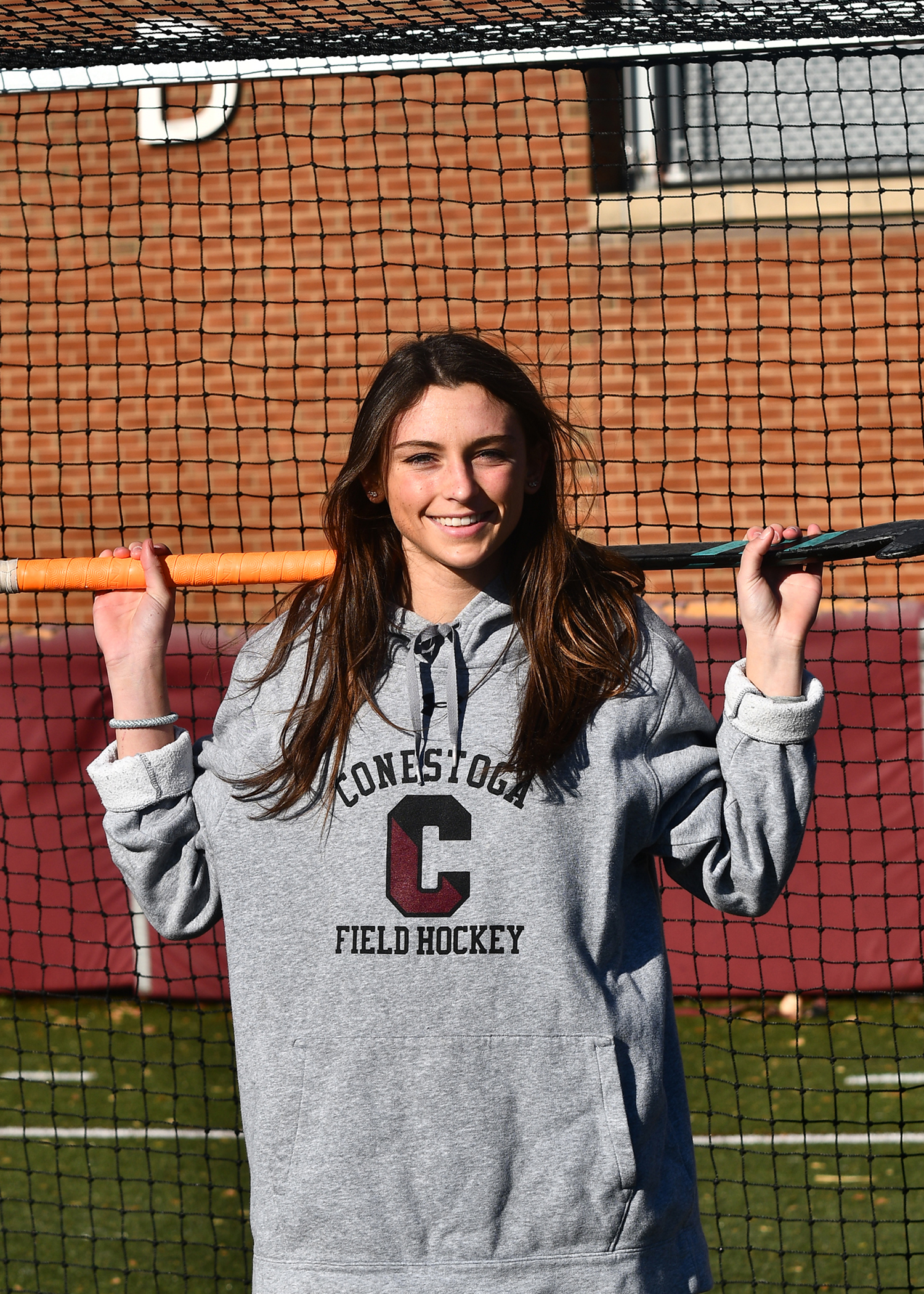 BERWYN—Conestoga had a season for the ages, capturing a district title and advancing further in the state tournament than any other team in program history. Though numerous players stepped up for the Pioneers in different games, no player had a bigger, more consistent impact than junior forward Kate Galica.
For her contributions to the Pioneers success this season, Kate Galica is the Daily Local News Field Hockey Player of the Year.

Galica is being recognized for her prowess in field hockey, but make no mistake—Galica is a well-rounded athlete, having done jumps and sprints in track in the past, and she still also plays lacrosse and basketball for Conestoga. Developing different skills for different sports only helps make an athlete better at all of those sports, according to Galica.
“Each sport is different, but all help make me stronger for the next sport,” said Galica. “In basketball I jump a lot and the defense is like lacrosse, and that helps me win the draws on the circle and practice defense for lacrosse.”
On the mental side, being the rare, three sport athlete keeps the mind sharp.
“The other thing is the great competition I play against in the Central League for all sports, said Galica. “Most games are close battles with no room for error and someone has to step up. I’m lucky to have some awesome teammates so there is always someone who is ready to step up.”
Galica got her start early in field hockey, first picking up a stick in kindergarten.
“I started when I was in kindergarten and played Fast Flicks for several years before joining the Main Line Field Hockey Club (Mayhem),” said Galica. “Some of my friends were starting to play soccer but I had more fun playing field hockey.”
For quite a few years, Galica played as a midfielder, before some of her coaches realized her speed might be better utilized at forward.
“Midfielders see action on both the defensive and offensive ends and I always liked being around the ball,” said Galica. “I like getting the ball in a small space and then extending the play by sprinting down the sideline. I’m surrounded by some great players so once I’m in the circle I try to find the open players. I love that the play happens so quickly and we are coached to act fast. That style of play worked well for us this season.”

Though she will continue as a three-sport athlete in high school, she has already committed to playing one sport at the University of Virginia, and the sport is lacrosse.
“I just think my speed is put to its best use in lacrosse, but it was a decision I had been dreading for years, said Galica. “I played club for both lacrosse and field hockey, and it was a huge commitment for my family. Right now my lacrosse team, NXT Black, is ranked in the top 5 in the country. Half the team is Division 1 commits so I feel lucky to be playing at such a high level as I prepare for UVA.”
Virginia was not the only school seeking to have Galica come to play sports, but once she visited, it was an easy choice.
“The recruiting process was a little overwhelming, to be honest,” said Galica. “Talking through all of the options with my family, we always seemed to land on UVA. Then I went there and just loved the campus, coaches and all of the players that I was able to meet. That made the decision so much easier.”
Though it will be a strange, new world when she goes from playing three sports to one, her body and mind just might welcome a little bit of a break.
“Playing three varsity sports puts a lot of pressure on my body,” said Galica. “And with club lacrosse all summer I really don’t get an off season, I forget what it’s like to sleep in on the weekends.”
But that is all still a little way down the road. For now, Galica is going to soak in the success of the past field hockey season, and look forward to a senior year that might even be better.

“All of us were super curious about this season,” said Galica. “We’re always competitive but we had some major holes to fill due to our graduated seniors. Once we beat Villa in a pre-season scrimmage and then followed that up by beating West on their field, we really started to believe in our ability to do something special.”
The Pioneers just kept getting better. They locked up a Central League title with a 3-2 win over Garnet Valley on the Jaguars’ home field, and then beat them again in the District 1, Class 3A title game. Conestoga won its first two games in the state tournament to move on to semi-finals.
Standing between ‘Stoga and a berth in the state title game was the District 11 champ, Emmaus High School. Emmaus, whose coach topped the 1000 wins mark earlier this season, has a decades-long streak of qualifying for the state tournament, and saw its line-up bolstered with the late-season transfer from the Hill School in Melea Weber, an 18-U national teamer. Weber, who played just three games for Emmaus, the final three games in states, scored a two of Emmaus’ three goals in the 3-1 win. The Hornets went on to win the state championship.
“We left it all on the field for our final game and I couldn’t be prouder of Conestoga field hockey,” said Galica “Maybe we should have looked around for our own transfer but honestly, we had a chance to beat them regardless. I learned at an early age not to blame officials or weather or whatever when you lose. We’ll have some big shoes to fill again next season, but we are lucky to have some star players coming up and I can’t wait to get started.”

No athlete ever does it alone. It takes a whole team of coaches, teammates, and family for any athlete to find success.
For Galica, that family includes her older brother, Kris, who ran track and played soccer at Conestoga, and now a freshman at James Madison and a Ranger in the Army ROTC program, as well as her parents, Kevin and Stephanie.
“My parents and family have always supported me from the sideline,” said Galica. “They always make sure I get to the field on time and with the right uniform. And my grandpa, Alan, always brings me a Gatorade. I couldn’t do it without them.”