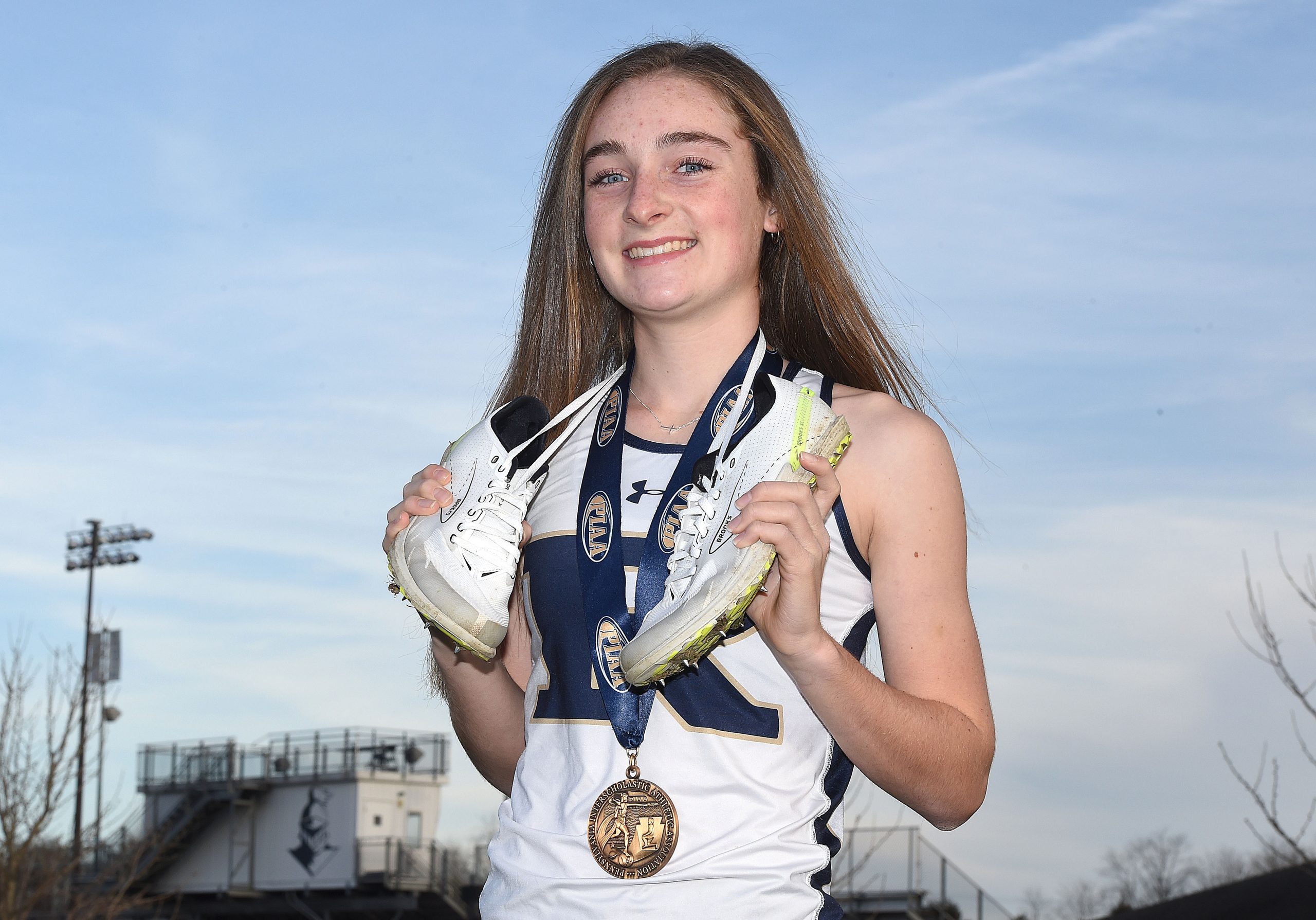 West Chester Rustin junior Ellie Keefer, competing for the first time in cross country this fall, had a memorable first-year campaign, receiving the 2021 Daily Local News All-Area Girls Cross Country Runner of the Year award.
It’s not too much of a surprise, however.
Keefer is a talented multi-sport athlete – she received second team All-Ches-Mont League honors in soccer this fall, and she placed fifth in the girls 3200 meter run at the PIAA 3A state track championships last spring.
And she brings a tough-minded competitive spirit to the cross country course from her experience in other sports.
“Ellie really enjoys giving her all in every way as an athlete and is really competitive, which is hard to teach to a lot of runners,” said West Chester Rustin girls cross country coach Andrew White. “Ellie has that naturally and it helps her succeed at the highest level. She isn’t afraid of anyone on the line and because of that she keeps improving every step of the way. Ellie is incredibly hard working and focused – she put in great summer training, then managed to balance an intense soccer schedule with strong cross country training.”
Rustin boys cross country coach Dave Smith said, “Ellie is just a great competitor. She is meticulous in her preparation and brings an incredible mental and physical toughness to every race. Anyone who has seen her race knows that she is relentless in pursuit and has one of the scariest finishing kicks out there.”
Keefer was the top Ches-Mont League cross country runner this fall both at the PIAA 3A girls’ cross country championships (where she placed 10th) and at the PIAA District 1 3A championships (she finished sixth). In addition, she was runnerup at the Ches-Mont girls cross country championships.
“My best race this fall was at States,” said Keefer. “I had the entire week before the race to focus on just cross country and my training. I felt fresh and mentally prepared coming to the start of the race, whereas at Ches-Monts and Districts, I was coming off playing an 80 minute high school soccer game the night before each race. The course at Hershey was hilly, but I had a good run and was very happy with my time.
“Since this was my first ever cross country season, it was an amazing feeling to be able to medal and finish in the top 10 at the state meet. I also really enjoyed the experience of being able to go with the whole team to States – we had so much fun together in Hershey.”
Despite a busy soccer schedule – Keefer has played varsity soccer for Rustin since her freshman year, and plays travel soccer year round for Penn Fusion – she wanted to try cross country this fall, because of her experiences in track.
“I enjoy running longer distances, and the idea of running a 5K on a course rather than on a track sounded appealing to me,” said Keefer. “When I tried it for the first time this year, I really enjoyed it.”
Keefer entered the 2021 cross country season with lofty goals.
“Having come off of a good track season last spring, I wanted to see what I would be able to accomplish in cross country this fall and I was hoping to make it to States,” said Keefer. “I trained with the cross country team this summer, and participated in the Chester County Cross Country Camp. Since I also played soccer for Rustin this fall and had practice or games every day after school, I would get a run in each morning before school and on the weekends.”
After Keefer’s soccer season with Rustin ended, she increased her cross country training.
“For someone who is new to the sport, she thought about her approach to each race very intelligently,” said White. “On our pre-race course runs she would pay attention to each course and ask good questions about the best way to approach the course and the field. She thinks through a strong race plan but without overthinking it. She strikes just the right balance.”
Smith added, “In practice Ellie is meticulous and disciplined and works as hard as any athlete I’ve ever coached. Despite her incredible success and talent, that she still remains humble; she listens, asks questions, and wants to learn and continue to improve as a runner.”
Keefer said, “My most influential running coach has been Coach Smith. He has always been very encouraging to me, and is a huge part in every aspect of my running. He always gives me great advice on how to run workouts and races, and what to eat, which I have found very helpful. The most important thing I learned from Smith is to run smart and have fun. Coach White is also a great coach because he has a lot of energy, and brings fun and excitement to race day and practices.”
Smith said, “Ellie just loves to run. When she isn’t doing track and cross country you’d see her out there catching a quick five or so miles sometime even before or after soccer practice or a game.”
“I’m really excited to see Ellie’s indoor and outdoor track season,” said White. “Then we’ll get back to cross country for next fall!”

Fun facts – Ellie Keefer
Favorite TV show: “College or pro soccer games.”
Favorite movie: Christmas Vacation.
Favorite athlete: Carli Lloyd.
Favorite pre-race pump-up song: “My Dad’s Heavy Metal playlist.”
Favorite team: U.S. Women’s National Soccer Team
Favorite place to visit: Wildwood, N.J.
Favorite pre-race meal: Plain bagel with a little bit of cream cheese and fruit.
Favorite running shoe: “I have tried on every shoe in the Bryn Mawr Running Company, and I always go back to my favorite shoe to run in, which is the Brooks Glycerin GTS. They have the right amount of support and bounce, but also hold up really well to the miles that I put on them.”
Favorite local running venue: “Rustin is my favorite place to run because we have a beautiful campus with just the right amount of hills and trails. The triple hill loop is my favorite course at Rustin because it is a scenic course with lots of hills, and takes you back into the wooded parts of campus.”
Pre-race preparation: “The morning of a race, I wake up early and give myself plenty of time to prepare. I eat a bagel with a little bit of cream cheese and some fruit. I also like to listen to music and think about the race. Before the race, I eat a couple of pixie stix or sour patch kids.”
College/career plans: “The medical field appeals to me. I am leaning toward majoring in Nursing or some other medical profession. I volunteer when I can at the Chester County Hospital.”
Person I most admire, and why: “My parents, because they are loving, work very hard, and push me to always do my best.”
Family members: parents Steve and Dana, sister Jama, brother Brett, dog Charlotte, grandparents Steve and Denise, and grandfather Tom Pullman.