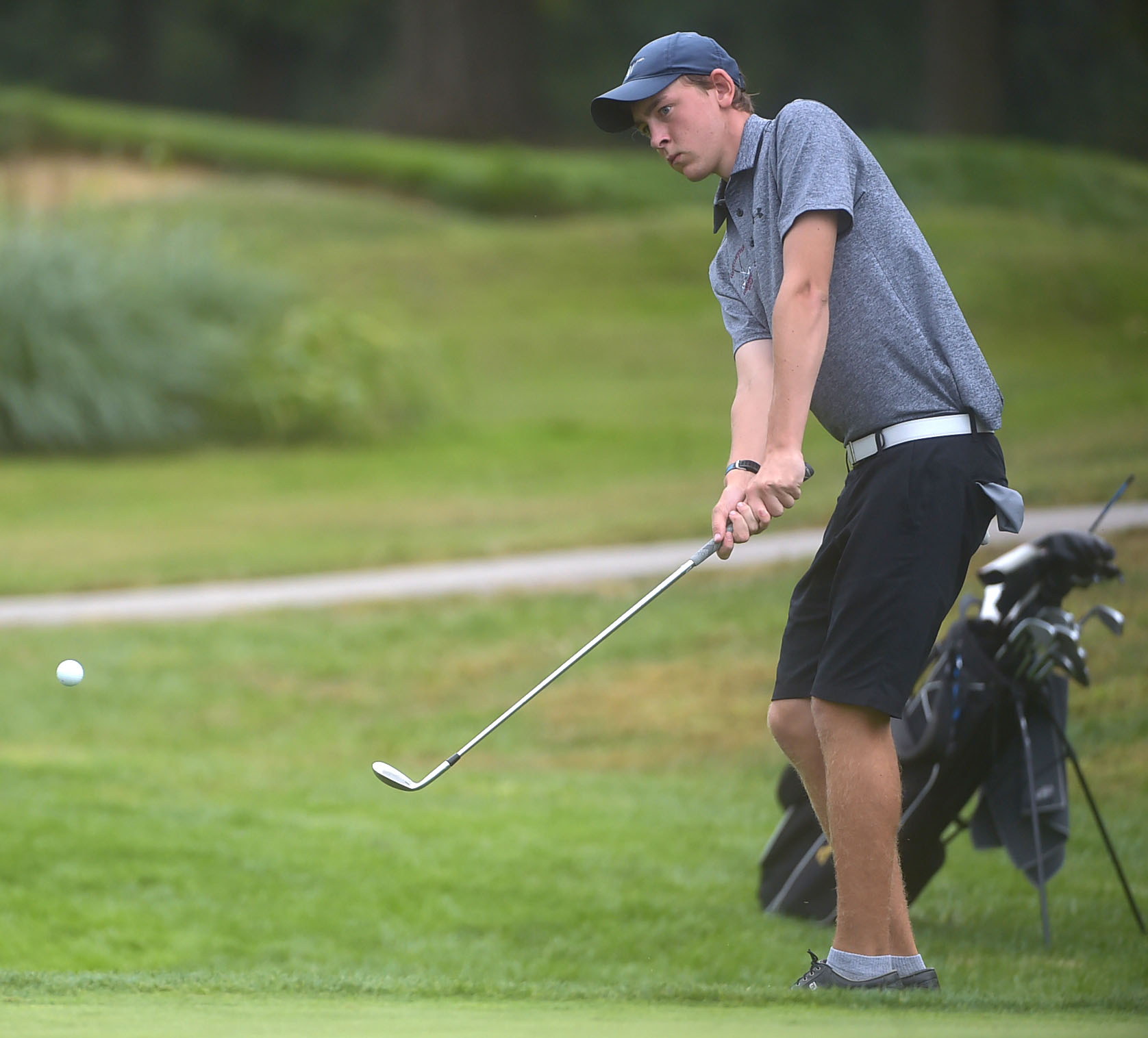 BEN SAGGERS, junior Bishop Shanahan – The number one player for the Eagles, Saggers was a major contributor as Shanahan placed seventh as a team in the District 1 Tournament. He carded a 1-over-par round to place fifth individually at Turtle Creek Golf Club. At the PIAA Championship, Saggers’ 80 was good for a tie for 39th overall. He was also the runner-up at the Ches-Mont Championship and was a first-team all-league selection.

RYAN D’ARIANO, senior, West Chester Rustin – Steady and meticulous, D’Ariano was a four year varsity starter for the Knights and saved his best season for his last. He averaged 36 for nine holes, and placed in the top 10 in league (fifth), district (eighth) and state (eighth) tournaments. He helped Rustin win the Ches-Mont American title and place second as a team at in District 1. “As he rounded out his high school career, Ryan became very, very solid,” said his coach Joe Paris. “He was playing such good golf, it was unusual for him to be over-par.”

SAM FEENEY, freshman, West Chester Rustin – As his first high school season progressed, so too did Feeney’s level of play. Clearly playing his best golf of the campaign, he flourished at the tournament level, culminating in a tie for fourth place overall at the PIAA State Championship where he shot a 1-over-par 72 against the state’s best. He wound up averaging 37 per round, was 12th at the Ches-Mont Tournament and his 17th finish at districts helped the Knights finish as the team runner-up.

NICK CIOCCA, sophomore, Devon Prep – Ciocca kick-started his 2021 season by winning the Philadelphia Boys Junior PGA Championship last summer, and then he had an outstanding fall season. His 1-over-par 72 led the Tide to the PIAA AA Boys State Team Championship. Devon Prep won the crown by nine strokes. As an individual, Ciocca placed in a tie for sixth place in the state tournament. He averaged 1-under-par per round and was a first team All-Catholic League honoree.

MICHAEL WALZ, senior, Conestoga – A team captain, Walz was a first team All-Central League pick. His 37.5 scoring average was fourth in the league. At 6-foot-10, he has already committed to play Division I college basketball at Richmond. “Michael uses his frame to his advantage as he is extremely long off the tee,” said ’Stoga coach John Jones. “However, he is much more than just a big hitter. He really impressed this year with his short game and ability to get up and down.”

BRET BERGEY, junior, Downingtown West – A first team All-Ches-Mont pick, Bergey averaged 38.5 per nine hole round this fall. He fired a career-best 72 to place third at the league championship. At the District 1 Tournament, Bergey shot 75-77 to finish in 21st place and missed qualifying for state’s by a single stroke. An accomplished athlete, Bergey has signed a letter of intent to play Division I college lacrosse at High Point (N.C.). His best dual meet round in 2021 was a 2-under 34.

KASIM NARINESINGH-SMITH, sophomore, Kennett – A budding standout, he helped the Blue Demons go 7-3 in the league and then placed third in the Ches-Mont Tournament. Narinesingh-Smith average 2-over-par for the season and broke 40 in 11 of Kennett’s 12 matches, and was named a first-team all-league selection. He made the cut at the District 1 playoffs and finished in the top-30 overall.

DYLAN KOCHIS, senior, West Chester Henderson – The most decorated golfer in Henderson history, Kochis was the first Warrior to qualify for the state tournament as a junior. This fall he did it again and wound up taking 12th place with a 3-over-par 73. A member at the West Chester Golf & Country Club, Kochis peaked at the District 1 Tournament, where he carded a 1-under round to place fourth overall. He also registered a top-12 finish at the Ches-Mont Championship. Will play golf at Division II Flagler College (Fla.).

KELLER MULHERN, senior, Malvern Prep – The Friars finished second in the Inter-Ac league and third in the Pennsylvania Independent School Tournament, and Mulhern was Malvern Prep’s top player. With a 35.8 scoring average, he was number one in the league and was named the Inter-Ac Player of the Year. A team captain, Mulhern was the medalist in three invitational tournaments this fall.

Tony Ball has only been the head golf coach at Devon Prep for two seasons, but the Tide have accomplished plenty during that short span.

During his rookie season a year ago, Ball’s team placed third in the PIAA 2A Team Championship. And then in 2021 the Tide captured the state title, a full nine-strokes ahead of its nearest competitor. And now, two months after the end of a truly memorable playoff run, Ball has been named the Coach of the Year by the Daily Local News.

“Our team played well this year and finished with a 21-4 record,” Ball said. “We were led by our three senior captains: Graham White, Tyler Kenneson, and Charlie Hurchalla. “This was their fourth year in a row making the team state finals. Our two underclassmen (Nick Ciocca and Kidder Urban) were both on the varsity team last year as well.

“These young men exemplified what it means to be a student-athlete at Devon Prep.”

Ball began as an assistant coach at Devon Prep for the 2019 season and was elevated to head coach soon thereafter.