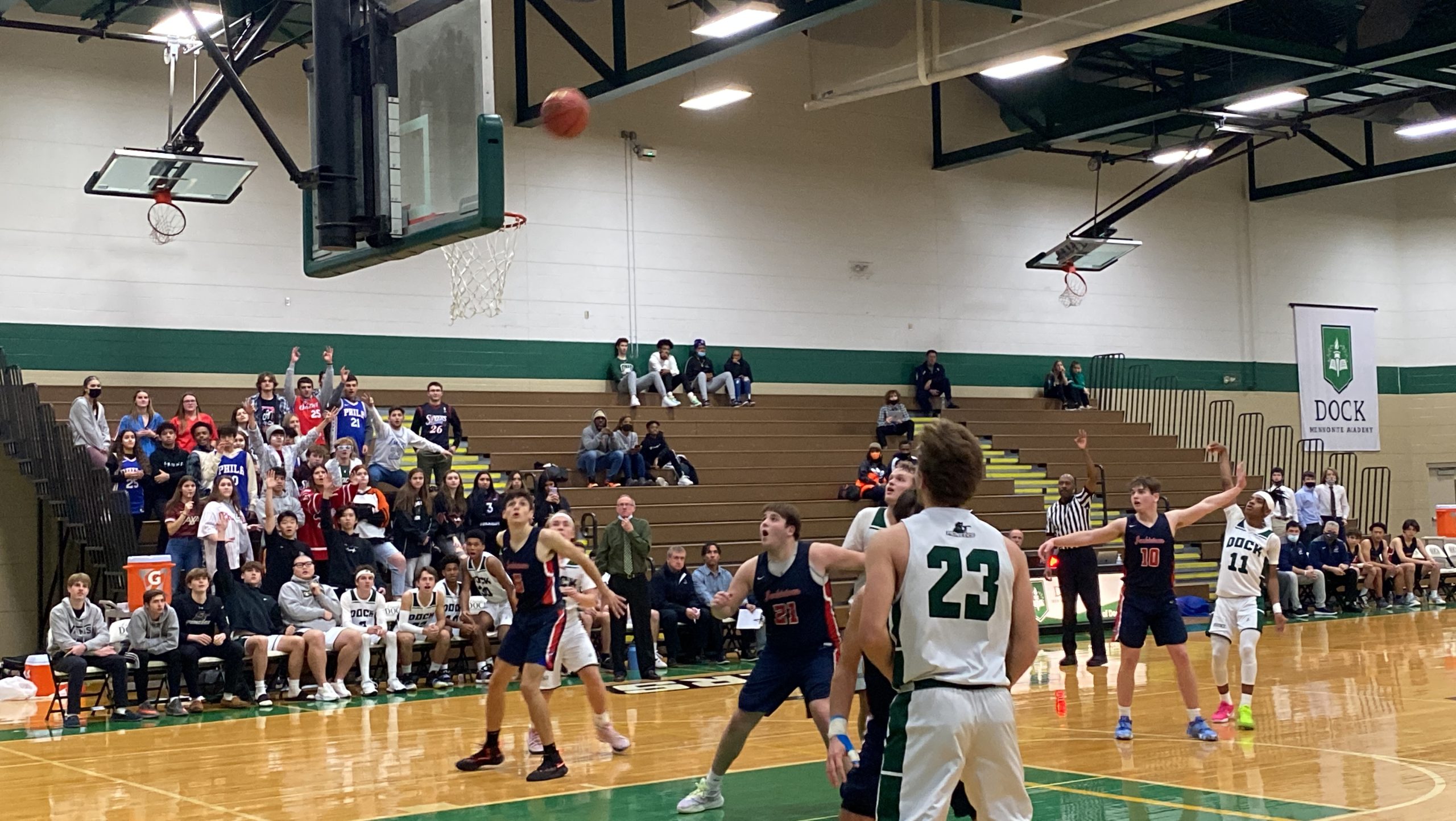 Dock Mennonite's Tomir Johnson (11) watches as he connects on a 3-pointer in the fourth quarter of the Pioneers' 59-43 win over Jenkintown on Wednesday, Dec. 22, 2021. (Mike Cabrey/MediaNews Group)

TOWAMENCIN >> The quick burst of offense the high-energy Dock Mennonite boys basketball team produces can end up stunning opponents – and sometimes even the Pioneers themselves.

“I looked up at the scoreboard and we were up 13 which I thought we were only up like five,” Dock’s Nathan Lapp said. “I knew we were on a run but I didn’t know we went on that big of a run. We were up 13 and I like had to calm myself down cause we were up 13.”

After three quarters of a tight Bicentennial Athletic League battle with Jenkintown Wednesday night, Dock Mennonite’s persistent tempo finally wore down the visiting Drakes. Lapp and Tomir Johnson combined for 21 points as the Pioneers outscored Jenkintown 27-9 in the final eight minutes to race away for a 59-43 victory.

“I think it was energy, man, like we got a bunch of layups, a bunch of runouts, the energy picked up, Lapp said. “And in our own gym, our student section really helped us out being loud and energetic. So, energy just really flipped the switch for us, which made us pull away.”

Lapp finished with a game-high 27 points while Johnson hit four 3-pointers – two each in the second and fourth quarters – to score 20 points as Dock (6-1, 4-0 BAL Independence Division) earned its sixth straight win since falling to Upper Dublin in its season opener at Souderton’s Jim Church Classic.

“Us as players as long as we just trust in Coach and listen to what he’s telling us to do, then we’ll win,” Johnson said. “He always tells us coaches wins practices, players win games. When we play a game it’s our duty and job to try to win the game and play as hard as we can as a team.”

Jenkintown’s Jake Hilton had his jumper working early as he collected 10 first-quarter points but the added just three more on a trey to opening scoring in the third. The senior, who fouled out with 5:11 in the fourth, had a team-high 13 points.

“He’s a really good player,” said Dock coach Mike Fergus of Hilton. “We wanted to guard him as well as we could. We were missing one of our better defenders, Lane Bergey, who’s a long, athletic kid – we would have alternated Tony (Martin) and him on him but Lane was sick so without him Tony had to guard him the bulk of the time. He’s coming off an injury, too, so I thought he played really good defense on him.”

John Liu and Tommy Walsh both chipped in 10 points, Liu hitting three 3-pointers for the Drakes (2-4, 2-1 BAL Presidents), who lost their second straight.

“They came in and battled us – give them all the credit in the world but then we finally woke up and we realized that you know what, we got to go to the press,” Fergus said. “And we have a pretty good man-to-man press and that turned the corner for us. And then we hit a couple threes out of it and boom you could see them get tired.”

Both teams end the 2021 portions of their schedules hosting tournaments Dec. 28-29.

“Had the ball five seconds left and I got caught,” Lapp said. “I tried to pump fake and then he didn’t jump so I then I just chucked it up there and it went in. And it’s a huge momentum swing. End of the quarter three, the student section and the fans start cheering, it just lifts the whole team up and gives you an edge going into the fourth quarter.”

A Bill McMahon free throw made it 37-35 at 6:13 but Dock proceeded to pull away by scoring the next 12 points beginning with a Johnson 3-pointer that put the Pioneers up five.

After a Lapp free throw at 5:24, Johnson buried a corner three off a Vaughn Martin assist, extending the lead to 44-35.

“Definitely motivates the team and moves the team to play better – definitely picks up the energy,” Johnson said. “Got to hit shots and make them count when you got to.”

A Vaughn Martin basket pushed the margin to 11 before Lapp capped the run with a three-point play for a 49-35 advantage at 3:51.

“I got a steal and I got an and-one and I just have a lot of energy when a good play happens and the whole gym just rises,” Lapp said. “And it just lifts our whole team up, it just makes us better.”

The Pioneers’ exuberance after Lapp’s three-point play resulted in a technical foul – Walsh making the two at the line with a Jeff Staples three cutting the Drakes’ deficit to nine. But four straight points from Hoyt Bultje pushed  the Pioneers advantage to 13.

After Liu banked in a three to make 53-43 a Johnson basket had the Pioneers up 12 with Dock tacking the game’s final four points on free throws.

A Hilton jumper gave Jenkintown a 13-6 lead in the first quarter while another two from Hilton had the Drakes up 15-9 before Lapp connected on two free throws at 25.8 seconds to pull Dock to within four after the opening eight minutes.

Liu knocked down a three to put Jenkintown back up seven at 18-11 but baskets from Lapp and Johnson made it 18-16. Another Liu trey had the Drakes leading by five before Johnson answered with a three to get Dock within 21-19.

The Pioneers trailed 22-21 in the half’s last minute but Johnson’s jumper in the final seconds gave the hosts their first lead of the night at 23-22.

“Tomir plays really hard with high energy,” Fergus said. “And when Tomir just picks his spots and just kind of lurks and then hits timely threes and open shots and layups, he’s really hard to guard because everyone’s focused on Nathan so much and other kids,” Fergus said.”

After a McMahon banked three had Jenkintown leading 28-25 in the third, a Johnson breakaway layup off a steal and Lapp’s reverse layup had Dock out in front 29-28. But Walsh scored the next three points with Ecker’s trey giving the Drakes a 34-29 edge before Lapp hit from three just before the buzzer.