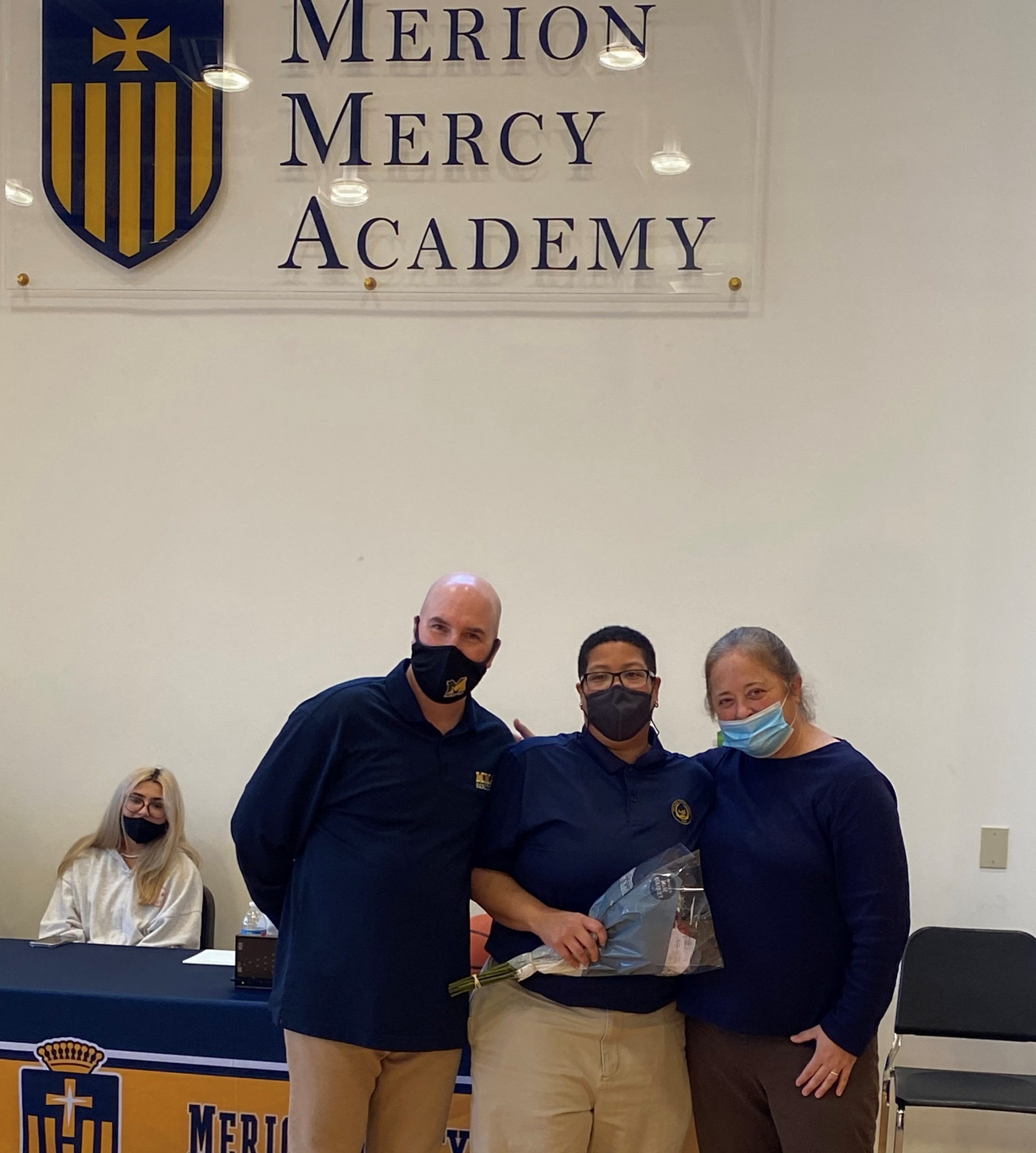 “The Merion Mercy community welcomes one of our own back home today in Agnes Irwin head coach Shanette Lee. Shanette was one of the catalysts behind the MMA basketball program’s emergence in the mid 1990’s which reached its apex in 1995 as the Golden Bears captured the PIAA state title. A tough-as-nails point guard, who would do whatever it took on both ends of the floor for her team to win the game, Shanette went on to a storied career at Villanova where she became Big 5 Rookie of the Year in 95-96, and later became the all-time assist leader in the history of the program before becoming a fixture on the coaching staff for 20-plus years.  It’s a given that former head coach Joe D’Antonio is looking down with a smile today as Shanette returns to walk the sidelines at MMA. We wish Shanette and the Agnes Irwin Owls nothing but the best this season and in the years to come!”

Academy of Notre Dame defeated Ranney at the Shore Games, 64-32, Dec. 18. Maeve McErlane had 21 points, and both Katie Halligan and Annie Greek chipped in with 11 points.

In the Medley Relay, Andrew Zhang, Weston Clark, and Aru Nayak were in a close battle after backstroke.  Chris Ivory established a small lead over Noel Park after the breaststroke leg. But Christopher Lynch caught Brennan Stigall in Fly to set up a freestyle showdown. Justin Cuevos Riego de Dies outpaced James Johnson down the stretch to earn the win for teammates Zhang, Ivory and Stigall, with Clark/Park/Lynch/Johnson coming in a close second.

Brock Whitaker a fast start in the 200 free and won by 10 yards, with freshman Hutch Wood cruising to second.  The 200 IM was a three-way Stoga battle after fly, which Mantas Sevelis turned into a slight lead swimming backstroke.  But he was unable to hold off teammate Derek Fung, who used the breaststroke leg to establish a two-second lead he would not relinquish, and Stanley Cui, who was solid in breast and free to earn second.

In the 50 Free sprint, John Yeniay had a lead at the turn and held off Cuevos Riego de Dies late for the win.  It was a three-way Stoga battle halfway through the 100 Fly, before Stigall fought off a challenge from Lynch to earn gold.  Brandon Bacani completed the sweep.

Johnson, Park, and Zhang were even after 25 in the 100 Free, and it was a battle late before Park proved his meddle to outpace Zhang (second) and Johnson (third).  Yeniay and Whitaker were close after 100 in the 500 Free, before Yeniay pulled away in the second 100 and dominated from there for an easy win.  Whitaker took second.  Weston Clark was barely touched out for third.

Two sweeps for the Pioneers finished off the individual events for the Pioneers, with freshman Maxx Laganelli taking an early lead and cruising in the 100 back.  Mantas Sevelis easily took silver, with Jack Reinhart putting in a good swim for bronze. Then Chris Ivory used a strong start and a dominant second 25 to coast to victory in 100 breast.  Leonard Wu and Stanley Cui were even after 75 before Wu extended late to earn silver.

In the 400 free relay,  Jack Semmer used a strong start and surprisingly solid turns to turn over a lead to classmates Stanley Kim, James Manion, and Ryan McDonough who won easily.  Yeniay established a second place spot for the team of Cuevos Riego de Dies/Yeniay/Sevelis/Wood as they recorded the final points for Stoga.

The Pioneers led all the way in the 200 medley relay.  Anna Bakker established a slight lead over Sabrina Sandorff in back, handing off to Lily Robinson who extended the lead swimming breaststroke.  Jena Nowoswiat’s strong fly leg and a dominant performance from anchor Keira Haas gave the team of Sandorff, Shui, Nowoswiat, and Haas the gold.  Bakker, Robinson, Lauren Verrelli and Caitlin Faris finished second.

Carys Collin established a body length lead after 50 in the 200 free, with Kathleen Manion in hot pursuit.  But Collin hit a great turn at the halfway poll to extend her lead for a solid win, with Manion getting second easily.

Delaney Burns and Emma Galef were in a tight battle early in the 200 IM, but Burns underwater skills in Breaststroke were the difference.  Burns, Galef, and Sarah Park turned in the first sweep of the night for Stoga.  Naomi Furman was first off the blocks in 50 free, establishing a body length lead that she never relinquished.  Freshman Caroline Morrissey had a strong swim to comfortably take the silver.

Mackenzie Nagel led the way in the first of three straight sweeps for the Pioneers, establishing a lead by the first turn and cruising from there in 100 fly.  Hadar Miller had an impressive second 50 and held off teammate Emma Galef for silver.  Then Kallie Whitaker was off the blocks fast in the 100 free, but was overtaken by Keira Haas and Ayala Miller by the halfway point.  Haas outswam her teammates down the stretch, with Miller second and Whitaker third.

In the 500 free, the Pioneers established a solid 1-2-3 lead from the gun.  Brianna Fan maintained a body length lead throughout, and despite enthusiastic cheering from brother and lap counter James, Kathleen Manion could not close the gap.  Sabrina Sandorff completed the third straight Stoga sweep.

In the 200 free relay, Adriana Bertolotti established a body length lead that Burns, Brianna Fan, and Furman extended from there.  They won by half the pool.  The foursome of Verrelli, Ella O’Shea, Caroline Morrissey and Natalie McGlaughlin used a great swim by O’Shea to capture second easily.

Juliana Yao and McLaughlin were in a battle through 50 in the 100 back, before Yao outpaced her teammate in the second 50 for the win.  In 100 breast, Lily Robinson had a strong start and cruised to victory.  Alyssa Totoro was in a battle for 2nd after 50, and a late surge allowed her to capture the silver.

It was a back and forth battle between all three Conestoga relay teams in the final event, the 400 free relay.  Collin/Haas, Yao/Shui, and Hadar Miller/Nagel were tight after 200, before Laganelli built a 3rd leg lead that Ayala Miller pounded home for the Collin/Haas/Laganelli/Miller crew.  Nowoswiat and Totoro fought off O’Shea and Bertolotti to give Hadar Miller/Nagel/Nowoswiat/Totoro the silver.