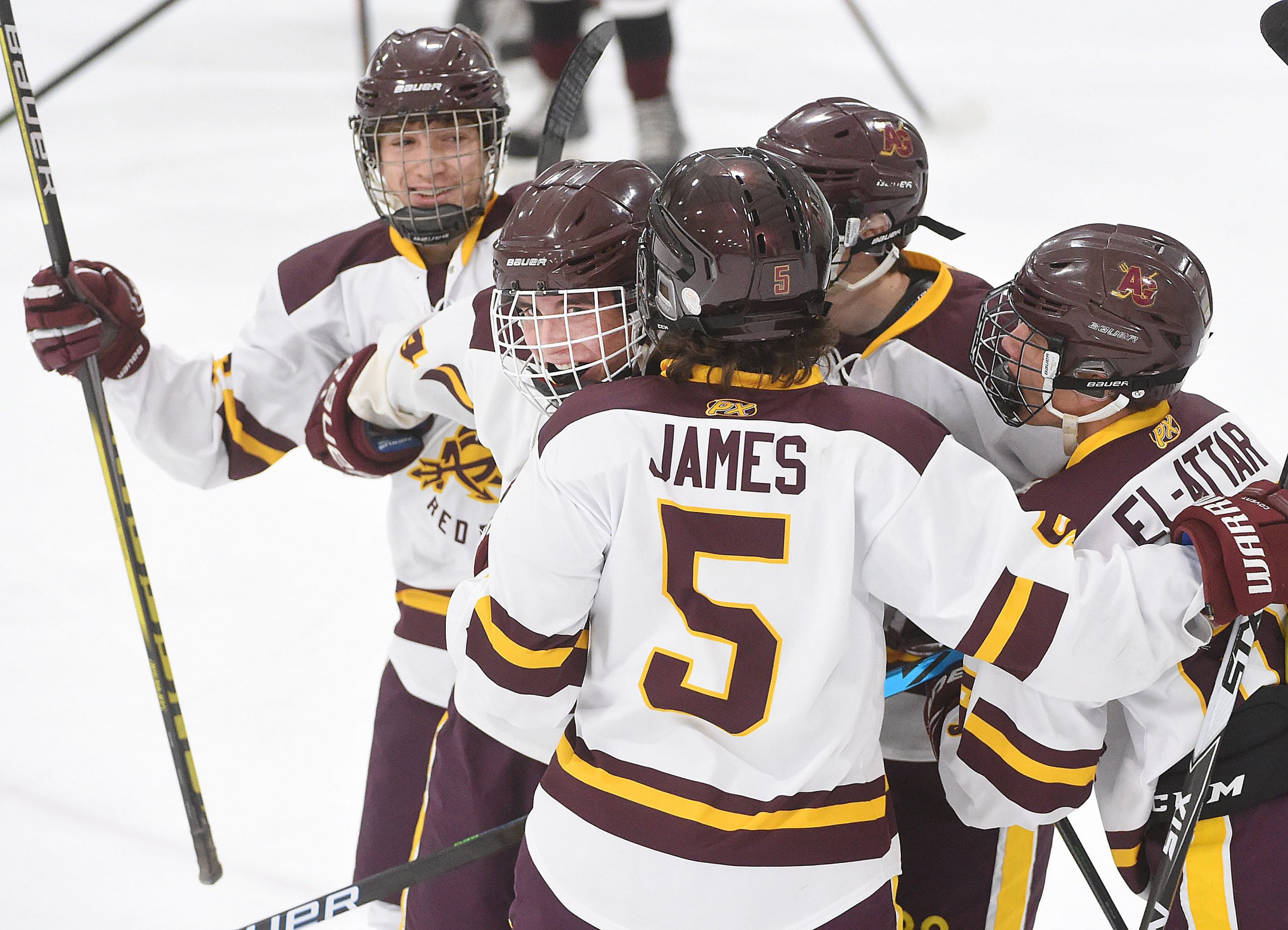 WEST GOSHEN >> The quick start the Avon Grove ice hockey team has gotten off to this season has seen them in the middle of the Inter-County Scholastic Hockey League Ches-Mont race, and the roll kept on going Friday at Ice Line.

Buoyed by three power play goals in the third period, the Red Devils (4-2-1) downed West Chester Henderson, 5-2.
“Tonight is the first night we had all our players, so our goal was to get all four lines going,” said Avon Grove coach Sean Cannon. “Try to run them down as the game went on. It’s the style we like to play, roll four lines and try to get everybody into the game and try to come after them as hard as we could.”
Avon Grove showed that jump in the early part of the first period, recording the first four shots on goal. They struck first about midway through the period. Defenseman and captain Caleb El-Attar broke down the left hand side just below the goalline, and flipped a pass out in front. Senior Brian Chandler, who grazed the post earlier in the period, beat Henderson goalie Taylor West high to the stick side for a 1-0 lead.

Avon Grove’s (5) dives to move a puck in the first period against West Chester Henderson.Avon Grove went on to a 5-2 victory in action at Ice Line Friday evening. (PETE BANNAN – DAILY LOCAL)

The Red Devils outshout Henderson, 11-3, in the first period.
Henderson got its first stupendous chance in the second period. Tyler Aughey got behind the defense and collected a pass that put him in on a breakaway. However, he shot wide and the one-goal lead stood.
The Red Devils added to its lead with 3:22 left. On the power play, Nathan Crossan flipped a rebound past West to double the advantage for the first of his two goals on the evening.
“The first one was a shot from the point, it got tipped by Ian D’Ambrosio, and then right before it got to the goalie, I tipped it back up and it went over his shoulder,” said Crossan.

The penalty kill was a highlight for Avon Grove, as they killed a couple of two-man down situations and ended up 1-for-5 for the game.
“That starts with our forwards,” Cannon said of the penalty kill. “They put a lot of pressure on them and did a good job. They actually listened and did what they were supposed to do which helps, but its nice when it all works out that way. Lucas Akana did a good job on the 5-on-3.”
The Warriors pulled one back nearly 30 seconds later. Aiden Laverty won a puck battle behind the net and threw a pass out in front, which found a wide open Tyler Krick, who beat Justin Mackley (25 saves) to cut the lead to 2-1.

Henderson tied it up six minutes into the third period on the power play. Krick snapped a shot from about 10 feet inside the blueline that got past Mackley and the score was 2-2.
Avon Grove answered back three minutes later with the man advantage. Jack Dembosky’s point shot was tipped in by Will Gorman with 11:25 left to regain the lead for the Red Devils.
Crossan’s second goal of the night doubled the lead for the second time and Gorman’s second goal put a cap on the scoring.
“It’s a big win, a Ches-Mont game means a lot,” said Crossan. “We played hard and came back after they tied it up. It’s good to get the win.”