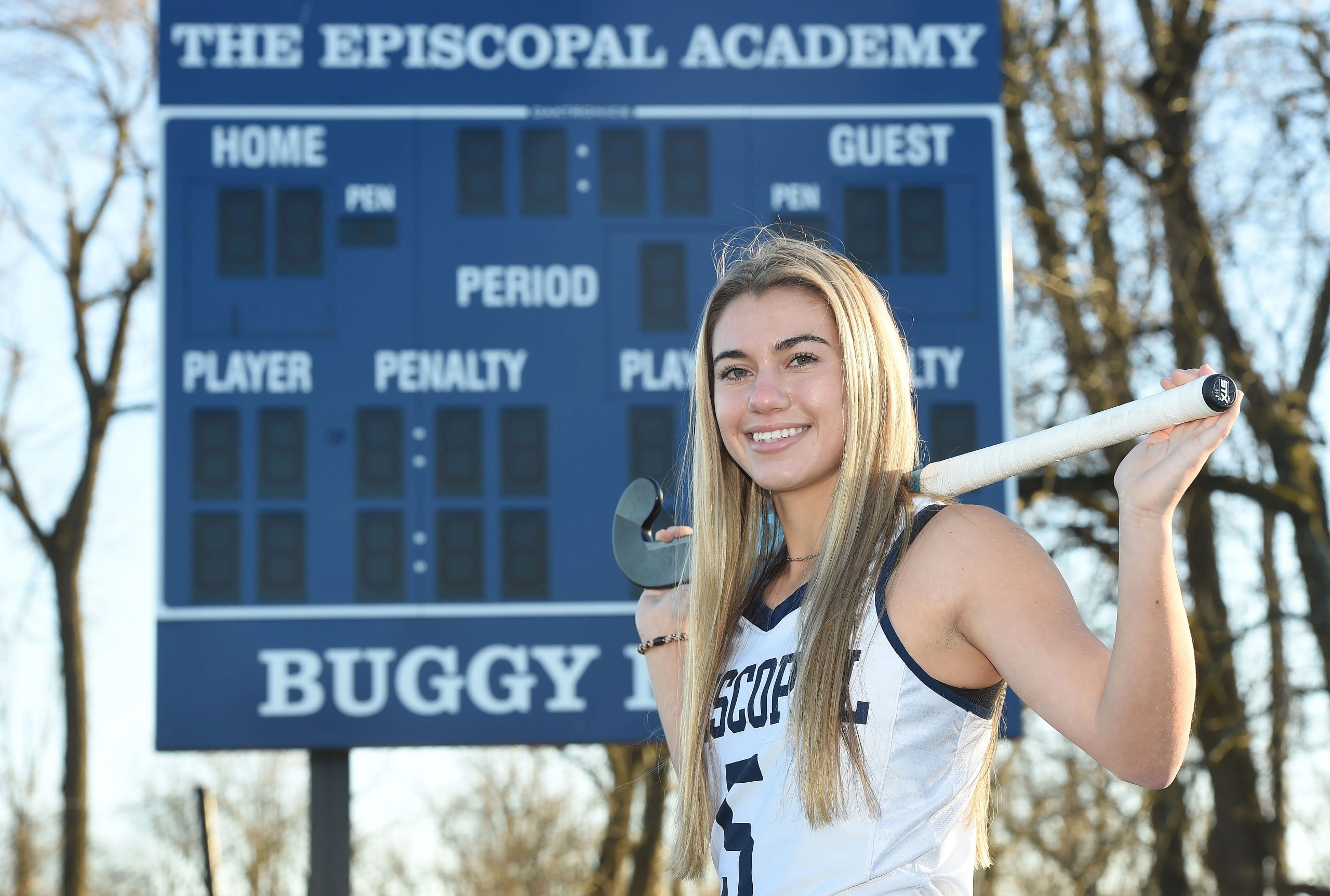 NEWTOWN SQUARE – Ashley Sessa arrived just in time for the last two days of field hockey training camp. The senior forward had a valid excuse for being so tardy.

She was in Santiago, Chile, during the last week of August, helping the USA Under-22 team earn a bronze medal at the Junior Pan-American Games. So second-year Episcopal Academy coach Stefanie Fee did not have to worry about Sessa being in shape.

It was her second medal with Team USA over the summer. In June, the North Carolina-bound senior earned MVP honors and as Team USA successfully defended its Indoor Pan American Cup title, qualifying for the FIH Indoor World Cup in Liege, Belgium next February. Sessa also was named to the U.S. Women’s National team in June for its pre-Pan American Games tune-up series with Canada, which took place in November.

Episcopal Academy’s Ashley Sessa fires a shot in a game against Notre Dame this season. Sessa led the Churchwomen to the Inter-Ac and PAISAA titles. (PETE BANNAN/MEDIANEWS GROUP)

“It’s always been a dream of mine to be at the highest level and now that I’ve reached that I know I still need to improve every day,” said Sessa, who has been part of the national program since 2017 and has earned two international caps. “I definitely know I’m not at my peak yet. Playing with these girls on the national team every day is going to make me better.”

It certainly helped kick start what turned out to be a spectacular season. Sessa proved that she was ready to go in the opener a few days after her return with two goals and two assists in a 7-5 win over a Gwynedd Mercy Academy team that would go on to win the District 1 Class 2A title and reach the PIAA 2A final.

That made her an easy choice as the Daily Times Player of the Year.

Sessa is the second straight player and third overall from EA to earn Player of the Year honors. Former teammate Kelly Smith received the honor in 2019. Margaux Paolino was the choice in 2015.

Sessa and Szukics are the only repeat selections from 2019. No All-Delco team was selected last year due to the coronavirus pandemic. Sessa, Szukics, Garber, Ciluffo and Delaney are the only seniors on the team. Bruder, Boston, Snyder, McConaghy and DeRose are juniors. Saylor and Seeger are sophomores. The All-Delco team was chosen by the Daily Times sports staff after consultation with county coaches.

Sessa began her scholastic career at Spring-Ford but transferred to Episcopal Academy prior to her sophomore year.

“I came here for a smaller school,” Sessa said. “Spring-Ford was just too big for me. I did love it there. I went there since I was in kindergarten but it got to be too big and overwhelming. I needed a smaller setting and more focus from teachers, too. I realized EA had a smaller class setting and all the academic support that they have. That was a major reason for coming here.”

She learned about EA through two WC Eagles teammates, Smith and Sophia Acosta, who now play at North Carolina and Penn State, respectively.

Sessa has grown to love EA, too, even though the commute from her home in Schwenksville is rather lengthy.

“I love coming to school every day,” Sessa said. “I really look forward to it.”

Her combination of skill, speed and endless energy sets her apart. Her stick skills are superb; she is usually the fastest player on the field and is in constant motion. She never stops moving and uses her speed to make a quick transition from defense to offense and vice versa.

“I feel that one of my best attributes is change of speed,” Sessa said after EA’s 6-1 victory over Notre Dame this season. “I’ll sprint but I make sure I make my cuts as fast as I can to catch the defender off guard.”

Being on a team as talented as EA helps, too. Szukics is headed to Duke. Garber will play at Boston College. Bruder is slated to join Sessa at North Carolina following her graduation in 2023. They push each other every day, and it showed on the field. EA’s only loss was a 3-1 setback to Eastern Regional in the MaxPreps tournament at the Proving Grounds in Conshohocken. Eastern Regional went on to win the New Jersey Group IV and Tournament of Champions titles.

The Churchwomen closed out the season with 14 straight wins to finish ranked No. 2 in the final Max Field Hockey national top 25 poll.

“I feel if you have good players around you, high energy players, it makes you a better player,” Sessa said. “We support each other. That’ keeps your confidence high and makes you want to play harder. You’re not afraid to make a mistake because you know your teammates have your back if you do make a mistake. They’re going to support you.”