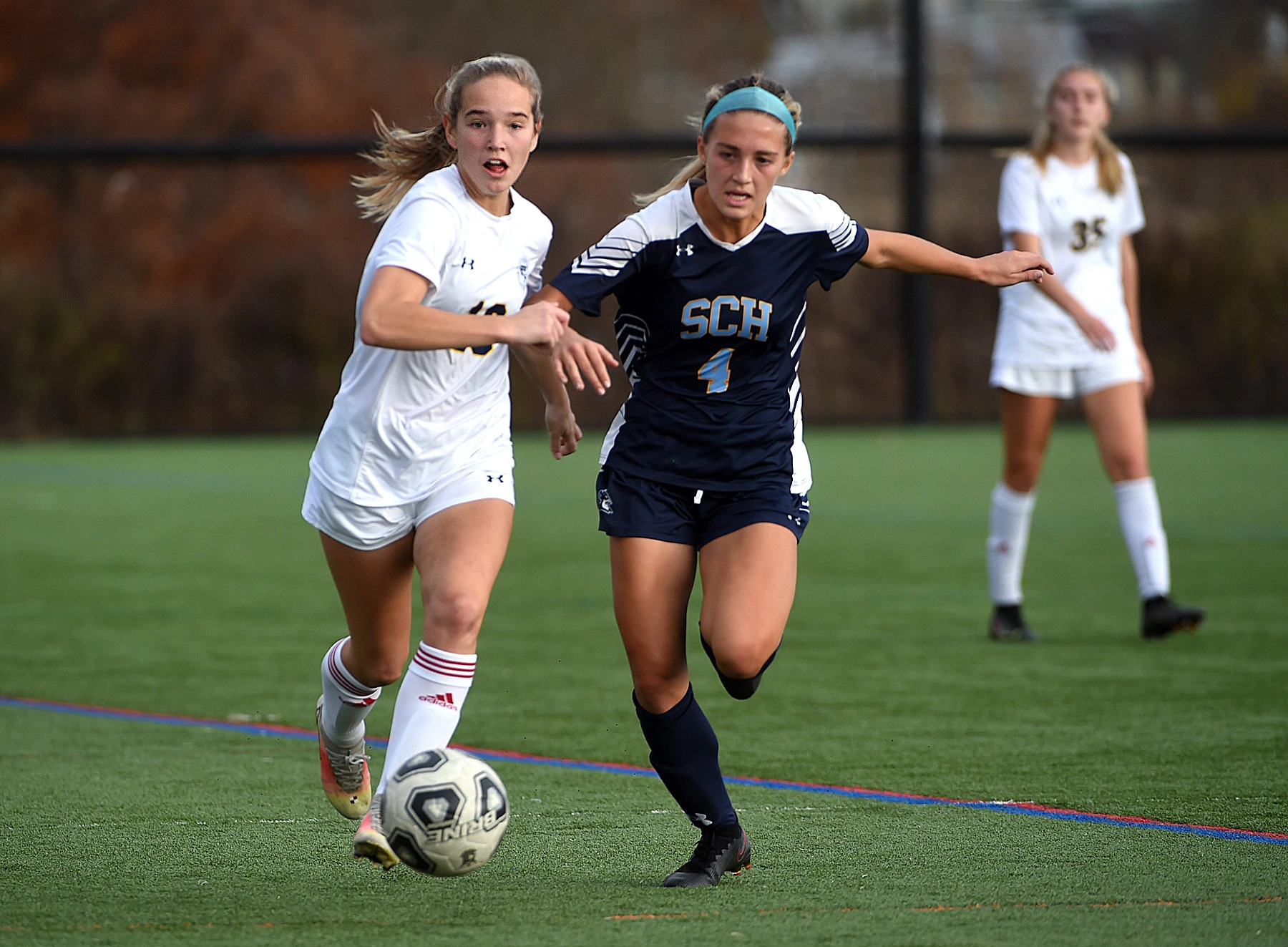 In addition to Player of the Year Emily Daiutolo, the rest of the All-Delco girls soccer team includes:

Maya Naimoli, Episcopal Academy: The junior goalkeeper is one of the premier shot-stopping talents in the Delaware Valley. Naimoli backstopped an EA squad that went 13-5-1, with three losses to powerhouse Springside Chestnut Hill. She allowed 17 goals in 19 games, including pitching shutouts of PIAA Class 3A runner-up Radnor (4-0), PAISAA runner-up Notre Dame (5-0) and a win over Catholic League champion Archbishop Wood. Naimoli kept eight clean sheets, allowing just one goal in the team’s first seven games. She was named to the first team All-Inter-Ac and won EA’s team defensive MVP award. Naimoli has committed to Ohio State.

Audrey Cain, Notre Dame: It’s not often that an outside back is so pivotal to a team, but Cain was that player for the Irish. Playing on the right, she was one of the team’s top scoring threats with five goals, thanks in part to her skill on the dead ball. She came the closest to scoring in Notre Dame’s PAISAA final loss to unbeaten Springside Chestnut Hill, her floating free-kick delivery pushed over the bar at the last moment in an uncharacteristically close 1-0 win for the Blue Devils. Cain’s defensive ability also shined. She helped the Irish win 16 games in an epic turnaround season. Notre Dame posted 11 shutouts and earned a pair of 2-1 overtime wins.

Carly Walters, Springfield: The senior center back was the captain of one of the Central League’s stingiest defenses. Three illustrative numbers of Springfield’s defensive prowess: The Cougars posted 12 shutouts in 19 games, with nearly as many wins (13, a program record) as goals allowed (15). The cerebral and tidy Walters was a big part of that, along with second-team goalie Emily Boyer. Their results included a 0-0 draw with PIAA Class 4A finalist Conestoga and a 1-0 win over PIAA Class 3A finalist Radnor on the way to a District 1 tournament berth. A four-year varsity starter, Walters also chipped in two goals and two assists. She was a first-team All-Central pick.

Olivia Kelley, Radnor: The Raptors’ run to the District 1 Class 3A title and PIAA final was predicated on defense. While much of the control was exerted from midfield, the center back duo of Kelley and Tellian Schwarz was often called upon to extinguish fires, and they did so with stunning efficiency. Radnor allowed 16 goals in 25 outings. That included a stunning recovery late in the regular season: After two straight losses and a 3-2 overtime win over Garnet Valley, a stretch in which the team allowed six goals in three outings, Radnor rattled off five straight clean sheets to end the campaign and didn’t allow a goal in three District 1 tournament wins. Kelley, with her recovery speed, physicality and ability to read the game, was a big part of the 13 clean sheets kept. Radnor allowed five goals in four states games, two of which went to overtime. A second-team All-Central pick, she’ll play lacrosse in college at Lafayette.

Kendal Elison, Episcopal Academy: The senior midfielder was the straw that stirred the drink for the Churchwomen. She tied for the team lead with eight assists and added four goals, controlling games from the center of midfield with a hand in what made EA so effective on both sides of the ball. Elison had a goal and an assist in both a September win over Hill School and in a league romp past Baldwin. A first-team All-Inter-Ac pick, Elison is still weighing her college options.

Mia Zebley, Garnet Valley: One of the few upperclassmen on a team laden with freshman talent, Zebley did what whatever the Jaguars needed. The goal and six assists that the junior supplied was just the tip of the iceberg of her contributions as a steady hand among so many talented rookies. The goal was big, a game-winner against Strath Haven. But with Garnet Valley starting as many as seven freshmen, Zebley shuttled to fill the gaps. She took shifts in central defense and forward, though she was most comfortable in a variety of midfield capacities, with her tenacity in the tackle and her vision to get the ball up the field and out of trouble suiting Garnet Valley no matter who was around her. Zebley was an All-Central first-teamer and this week committed to Elon to play lacrosse.

Coryn Silberstein, Springfield: The junior can conjure magic with the ball, opening up spaces in midfield that led to so many of the Cougars’ goals. She topped the team with nine goals plus three assists, landing on the first-team All-Central as Springfield set a program record with 13 wins and earned a District 1 Class 4A playoff berth. Silberstein scored twice in the wild 7-3 opening win over Conwell-Egan and both goals in a 2-0 victory against a playoff-bound Rustin side. She supplied game-winning goals against Garnet Valley, Archbishop Carroll and Marple Newtown, plus the assist on Liv Gutowski’s winner in double overtime against Radnor and Mairin Gallagher’s winner in the regular season against Haverford. Silberstein has committed to play soccer at Longwood University.

Jane Daiutolo, Radnor: Like her sister, the midfielder was an integral piece of Radnor’s journey to 20 wins and a first state final in 21 years. Jane was the team’s primary danger on set pieces, supplying a team-high 13 assists mainly through her dead-ball deliveries. She also scored six goals, third-most on a team that spread the scoring burden liberally. Jane set up Emily for the winner in September against Conestoga, a favor that Emily returned for Jane’s game-winner at Harriton. Jane also set up Kate Boujoukos’ OT winner against Garnet Valley. Jane also had two assists to Selah Koleth in the District 1 final victory over Villa Joseph Marie. Like her sister, Jane is weighing college interest to play soccer.

Mackenzie Lacey, Haverford: The senior was the kind of attacker that opponents had to account for at all times, whether she was playing on the wing or up top. Lacey was the heartbeat of the Fords’ attack, scoring 11 goals and adding four assists. She had a hand in 40.5 percent of the Fords’ goals, an importance magnified given that Haverford played eight 1-0 affairs and 11 one-goal games. No goal was bigger than Lacey’s marker in the District 1 Class 4A playoffs against Springfield, the only goal in the Fords’ 1-0 upset win, avenging a regular-season loss. It was one of Lacey’s five game-winning goals in a 13-win season for the Fords. Lacey was a first-team All-Central pick.

Adria Kitzinger, Ridley: The junior speedster was one of the Central League’s most lethal finishers, leading the Green Raiders to a 12-win season and the District 1 Class 4A playoffs. Kitzinger scored 23 goals to go with three assists, forming a dangerous attacking triumvirate with Jess Lefkof and Jackie Deisler. Kitzinger started the season fast and never slowed down: She had six goals and two assists in the opening weekend at the Sun Valley tournament, then tallied OT game-winners against Avon Grove and Penncrest in consecutive outings, the latter to complete a hat trick in a 4-3 shootout. Kitzinger had a goal and two assists in a win over Strath Haven, both goals in a blanking of Phoenixville and the only goal in a 1-0 victory over Garnet Valley. She was a first-team All-Central pick.

Quinn Whitaker, Episcopal Academy: Whitaker’s versatility served the Churchwomen well. Normally a midfielder, she was deployed up top to fill a need and cashed in all the skill behind her with a team-high 12 goals plus eight assists. She scored both goals in the 2-0 rivalry-day win over Agnes Irwin, had two goals and an assist in the revenge 5-0 win over Notre Dame and scored two goals and an assist in the blanking of Radnor. The freshman was an All-Inter-Ac second-teamer.