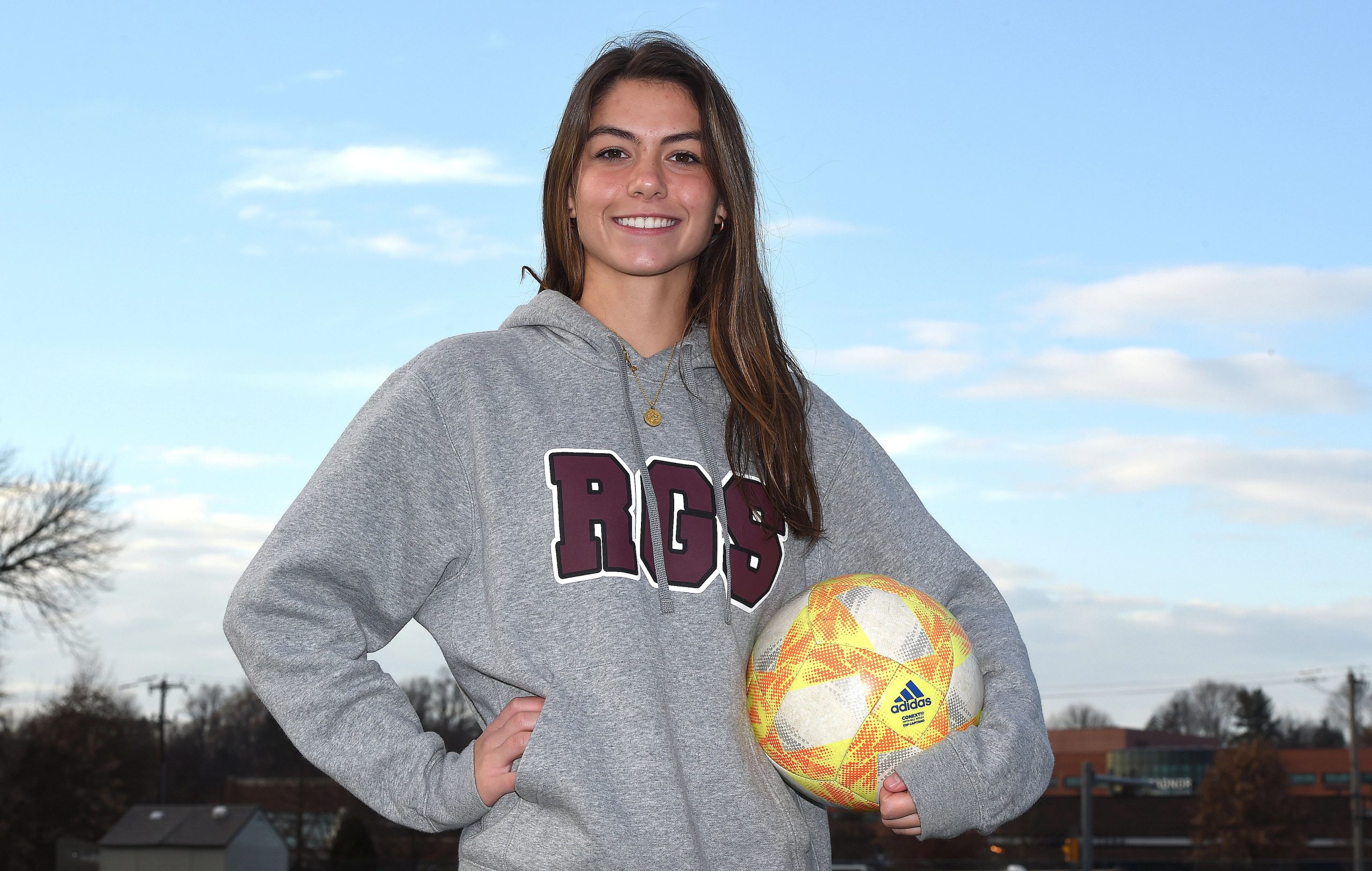 The first 40 minutes of soccer in the 2021 season wasn’t going Radnor’s way, and a second-half concession had Radnor down 2-0 to Agnes Irwin in the Sept 3 season opener. Thirty minutes later, thanks to the Daiutolo twins in midfield and a Kate Boujoukos winner with 11 seconds left, the Raptors had escaped with a 3-2 win.

The result in an early nonleague exercise wouldn’t demonstrably alter the direction of the season. But how Radnor got there, Emily surmised that afternoon, just might.

Radnor’s Emily Daiutolo, left, and Jane Daiutolo were at the heart of Radnor’s run to a state final. Emily is the 2021 Daily Times Girls Soccer Player of the Year. (PETE BANNAN – DAILY TIMES)

Consider that just another example of Emily’s exquisite vision on the soccer field.

From that opening win, Radnor would go on a run to a state final. It weathered the peaks and valleys of a Central League that produced a pair of state finalists (Conestoga was the 4A runner-up) to win the District 1 Class 3A title and reach the program’s first PIAA final in 21 years.

Both Daiutolo sisters were in the middle of that effort, literally and figuratively. Jane was the top supplier with 13 assists from her attacking midfield position, her set-piece threat bailing the Raptors out of many a tight scrape. She also scored six goals. Emily was the team’s leading scorer with 10 goals. As the central midfield fulcrum, her two-way play powered everything Radnor did, from her cerebral defensive presence to her calm on the ball, the metronome that kept the rest of the midfield in time.

For that influence, Emily Daiutolo is the 2021 Daily Times Girls Soccer Player of the Year.

All are first-time honorees, as there was no All-Delco team last fall due to pandemic-related disruptions. The first team includes five juniors and one freshman (Whitaker). The All-Delco teams are selected in consultation with area coaches.

With their relative strengths, it’s easy to imagine that Emily and Jane have always gravitated toward opposite sides of the ball, which is partially accurate. But despite their comfort in that part of the park, neither are naturally midfielders. Emily began as a center back and has dabbled as an outside back. Jane’s skillset has always suited the attacking element, as a forward or an attacking mid.

Emily’s defensive instincts are clear in the 360 degree demands of holding midfield. She was Radnor’s main conduit in building with the ball, setting the tone for when and how to push forward. Radnor was also adept at defending with the ball, using possession to dampen attacks and tire opponents. Emiy’s center back toolkit, with her ability to get stuck into challenges or make long recovery sprints, was brandished in moments of trouble, and usually to great effect.

“I feel like having played defense for so long, I know what is required from playing defensive midfield,” Emily said. “I know where I need to be for my defenders, and Jane always tells me where I need to be when I’m playing offense, so I feel like I have a decent idea of where to be and what I need to do on both sides of the ball. It’s definitely a big responsibility, but I’ve had the most amazing teammates around me to support me all season, and I couldn’t ask for anything better.”

Radnor’s Emily Daiutolo passes the ball in the first half of the District 1 Class 3A final. (PETE BANNAN – DAILY TIMES)

One of those teammates obviously stands out. Emily and Jane have played together since second grade. Born two minutes apart – Jane is older – they collected their discreet skills in different areas. But the chance to unite in midfield and leverage their connection was always a possibility. That was long the dream of their father, Scott, a college soccer player and their first coach.

Radnor provided that opportunity this year, and the rewards were immense. The combination of twin intuition and years of practice manifested in an uncanny sense of where the other was. Particularly from Emily playing balls forward into space that Jane would occupy an instant later with her incisive attacking runs, the chemistry was undeniable. It led to five Daiutolo-to-Daiutolo goals on the season, but the final two touches undercount how often the sisterly link-up led to dangerous chances.

“It’s just playing together our whole entire lives, and I feel like I just know every movement she’ll make,” Emily said. “She knows the pass that I’ll play, and I know the run that she’ll make.”

So, too, was the joy between them, a flesh-and-blood microcosm of the larger family atmosphere that Radnor has cultivated and drew upon in high-pressure moments.

“It’s been really cool having somebody always to be by my side on the field, someone who brings me a lot of comfort,” Jane said. “It’s really awesome.”

The results were pretty awesome, too. Emily’s highlights included a double-overtime penalty kick to beat Downingtown West in the regular season. She also buried a penalty in the 78th minute in the PIAA quarterfinal to send Radnor on to a double-overtime win.

Both sisters contributed starting in their freshman season. That gave them a unique vantage point on how to support other young players. It’s no coincidence that the bulk of Radnor’s postseason goals came from a bumper crop of freshmen and sophomores, benefitting from the midfield platform the Daiutolos formed.

While Radnor fell just shy of the ultimate payoff, losing to Mars Area in overtime of the state final, the journey far exceeded anything that the players imagined. With a few weeks to mull the end of the season, the appreciation of what they accomplished has only heightened for Emily.

“I wouldn’t change anything about it,” Emily said. “It was the most amazing experience getting to be there. I remember watching the state finals as a freshman and thinking, oh my gosh, what an honor it would be to get there. And I never really thought myself that Radnor would end up going there because it has been a while since we’ve been able to accomplish something like that. But when we did it, it was just the most amazing feeling, win or lose.”