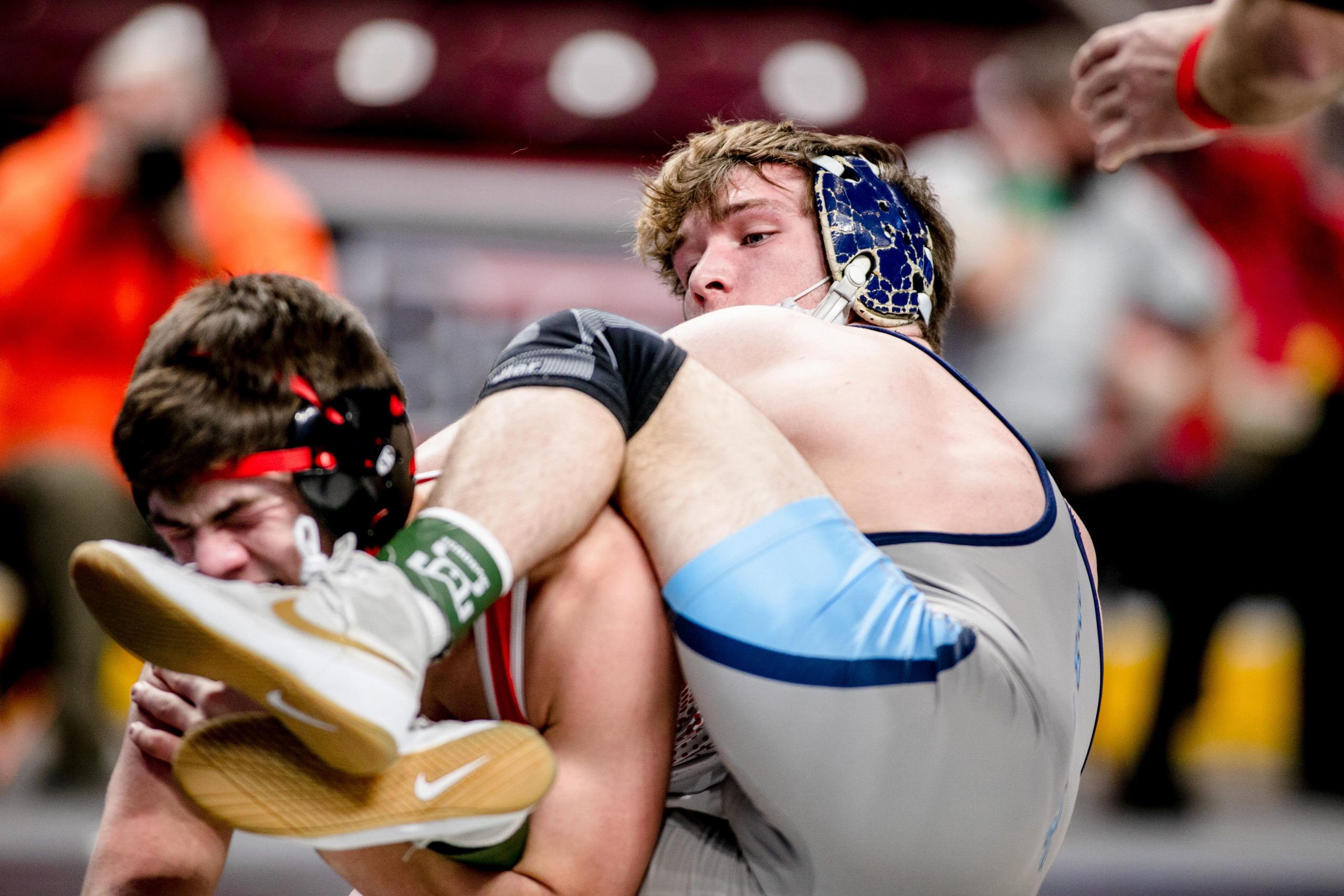 North Penn's Will Morrow tries to stay on top of Williamsport's Riley Bower in a 4-2 loss in the 145-pound consolations. (Nate Heckenberger - For MediaNews Group)

After eight months off, the Reporter/Times Herad/Montgomery Media area wrestling teams are back on the mat for the 2021-22 season.

Area teams have plenty of returning talent from the 2021 season.

In the Suburban One League Colonial Division, Pennridge and Souderton are among the schools trying to catch defending champion North Penn.

The Rams, under first-year head coach Brian Kuhns, bring back most of their varsity lineup from last year. Sam Kuhns was a state qualifier at 113 while Cole Griffin finished fifth at Regional at 106 and Ryan Gallagher qualified for Regional at 152.

Elsewhere in the SOL, Wissahickon is looking to improve on last season while Hatboro-Horsham is back after not competing. The Trojans have one of their largest teams in recent years with 35-40 wrestlers and the Hatters are hoping to have a historic season after moving to District 1 South.

In the Philadelphia Catholic League, La Salle is hoping to win another District 12-3A championship. The Explorers return plenty of district winners from last year – Connor Kwok at 126, Bobby Barth at 138, Sean Herron at 145 and Dante Burns at 215.

In the Pioneer Athletic Conference, Upper Merion is trying to bounce back after a 1-10 2021. Second year head coach Chris Falcone has four seniors coming back, plus Casey Lamey, who is returning to the mat after a few years away.

Below are team-by-team previews.

Last year: Did not compete

Season outlook: “HH Wrestling is practicing everyday to compete for a SOL Liberty Title. With our move to the D1 South, we hope to advance a record number of HH Wrestlers to the SE Regional Tournament.”

Season outlook: “La Salle looks to build on its success from the past few seasons and repeat as District 12 Champs to earn a spot in the PIAA AAA Team Championships in Hershey. Lots of talent returning and some younger wrestlers looking to earn their spot in the lineup to keep La Salle in the mix. A tough competition schedule should test the Explorers throughout the season.”

Season outlook: “A team goal every year is to win our league championship. We are happy to get back into some of our more prestigious tournaments in December! This better prepares our kids for post season. We also want to compete at district duals and qualify multiple wrestlers for the state championship tournament. We strive to help our wrestlers attain their personal goals.”

Season outlook: “Pennridge is excited for the season.  We have great numbers this year and we are still very young with only 2 Seniors on the roster.  The 3 freshman wrestlers from last year that had a solid post season run return this year ready to make the next leap and we add 2 very talented freshman this season.  The team has worked hard in the offseason and is looking forward to an exciting season.”

Season outlook: “We are looking forward to returning to a hopefully normal season a year removed from a tough year with COVID.  We had a few families transfer back into Souderton from private schools and are really looking forward to a positive season.  Much like last year we want to stay healthy.  We also have several girls out this season and with our newly formed girls team hope to continue raising awareness and have a great season with them!”

Season outlook: “We just want to compete and give our best effort on the mat.  We have one motto and that is work as hard as possible and just show up when it is time to wrestle.  This team is dedicated to becoming better as individuals and better as a team overall. We still may have to forfeit a few weight classes so our backs are against the wall, but I believe that the team will wrestle to the best of their ability.”

Season outlook: Looking to improve greatly on last year’s record. One of the largest teams in the past 10 years with 35-40 wrestlers.