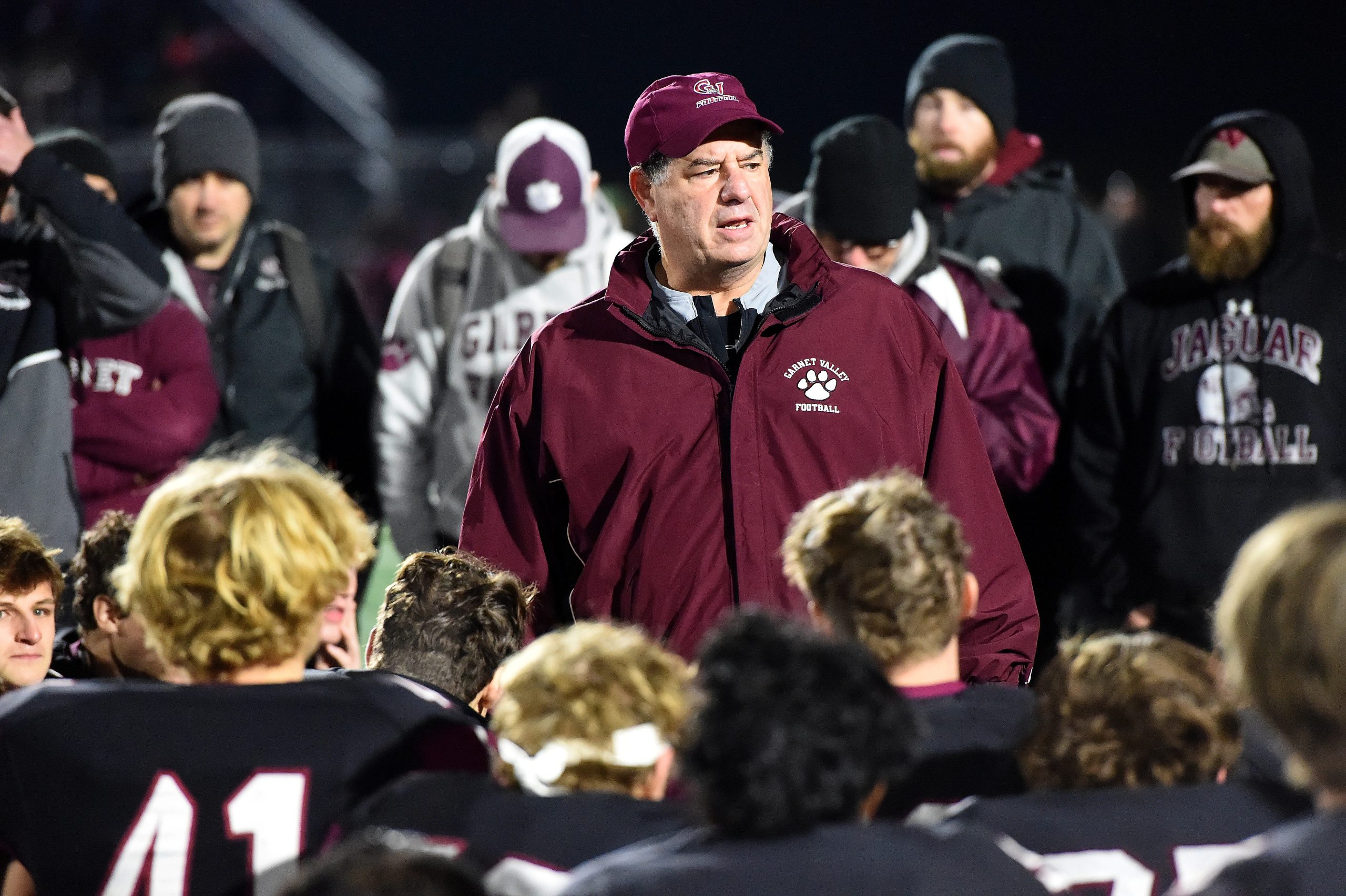 RIDLEY TWP. — There were 17 seconds left in the last football game he’d ever expect to coach Friday when Mike Ricci took the first stride into the rest of his life.

His Garnet Valley Jaguars driving, yet out of reasonable time, Ricci would lift off his headphones and begin the slow walk across Phil Marion Field to congratulate St. Joseph’s Prep coach Tim Roken, the two shaking hands as time officially expired.

With what would be a 49-13 loss, the Jaguars would finish a phenomenal 14-1 season just one victory short of a spot in the PIAA Class 6A championship game. With that, an era would be over. By Sunday morning, for the first time in his 38 years as an educator and 35 years as the head coach at Garnet Valley, Ricci will wake up and not have a football team to coach.

He may feel an obligation to take one last look at the film of the semifinal game Friday, but even then, there wouldn’t likely be much reason to obsess over the details. The Hawks, defending state champions, were better, a little quicker to the ball on defense, with a little more burst in the open field. The Jags, who were almost perfect all season, were tormented by turnovers, a reminder of how that sport always finds a way to reveal imperfection.

Garnet Valley crosses the field in the final second as the Jaguars fell to Saint Joe’s Prep 49-13 in the PIAA 6A semifinals held at neutral Ridley High School. It was the Jags first loss since 2019 and marks Ricci’s final game. (PETE BANNAN – DAILY TIMES)

While some may grumble that the Prep has a multi-state football recruiting footprint and no enrollment boundaries, Ricci didn’t become the second winningest coach in Delaware County history without a respect for whatever rules were written.

For that, even as several of his players, his former players and even some parents of players leaked tears both of exhaustion and pride, Ricci chose to remember what made his 260 career wins so precious, not necessarily the suddenness of his 125th defeat.

“It’s been a long time,” he exhaled. “Listen, I have loved every minute of this season. I just told our guys that the true measure of any team is to get the most of the ability level that you have. And this team certainly got the most of its ability level.

“The senior leadership has been spectacular. With the underclassmen, the work ethic has been just stellar. It hurts when you lose the last game of the year, but I told them we are going to celebrate this awesome season and focus on that.

“Then, we are going to walk out with our heads held high.”

The Jaguars were undefeated in the Central League, as they have been since November of 2019. They rolled into the Final Four with some postseason victories over some classic programs, including a 54-15 victory over ever-respected Coatesville in Ricci’s final game at Moe DeFrank Stadium. Like league rival Strath Haven a night earlier, also at The Phil, the Jags were in deep against a magnet program from Philadelphia. But no traditional public school big-classification program was better, at least in the eastern hunk of the state.

The season was an appropriate flourish to his career. Ricci took the Jags over when they were being challenged in the small-school classifications and, as the enrollment grew, developed them into one of the most consistently respected programs in Pennsylvania. That he did with a minimum of FBS-level recruits and a maximum of coaching dignity, thriving in a family atmosphere behind an enduring program policy: Oneness.

“I was really lucky to be here for his last year,” said quarterback Max Busenkell, who is bound for Notre Dame to play lacrosse. “We just did our best to make us proud. What he has done for our school for the past 35 years, you can’t say much about it. It speaks for itself.”

In character, Ricci invested more time than most coaches with his players after the game, allowing his assistant coaches to add their counsel, thanking the Jaguars for their effort, reminding them to savor the positives and carry them forward. That the huddle was surrounded by former Jaguars was proof that whatever Ricci built will represent a strong foundation for the next coach, and for the dozen after that.

“Right now, it’s hard to focus on the past,” said Navy-bound running back Shane Reynolds. “But we have a lot to be proud of. And in the next couple of weeks, I’m sure there’s going to be a lot of celebrating, cherishing the moments we had together.”

Eventually, the capacity crowd began to drift away, some hit with the reminder that Phil Marion Field has never been kind to Central League visitors, most satisfied that they had just spent the last 15 weeks enjoying another special season for a school that has had plenty.

By then, the only sounds were from the drums of the Garnet Valley band as it marched toward the buses. Heads high, no doubt.