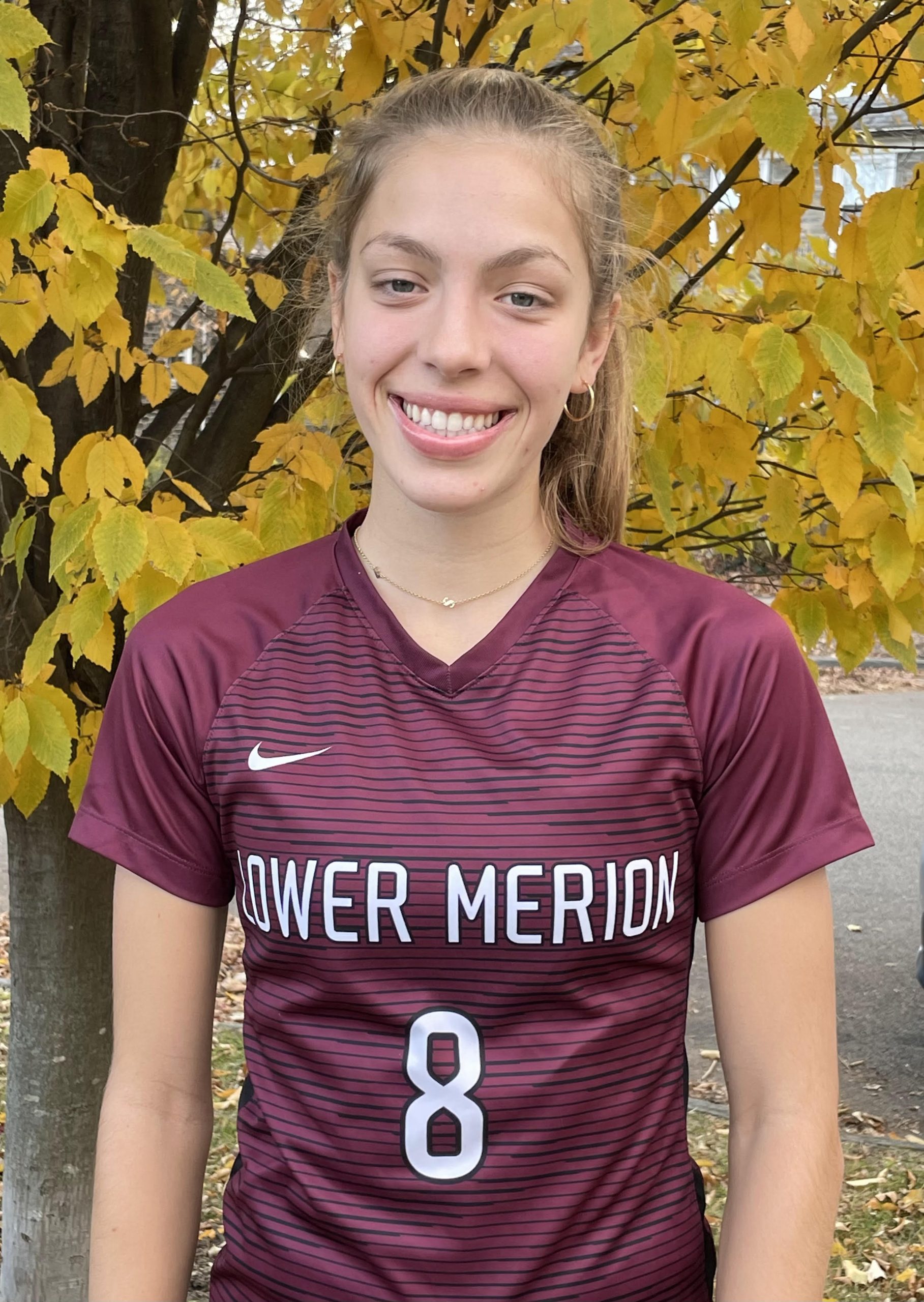 The junior midfielder scored 13 goals this fall, was third in the Central League girls’ soccer MVP voting, and was named the Most Valuable Player of an Aces squad that posted a 15-3 record and was the top-ranked team in the PIAA District 1 power rankings.

Q: What is your favorite memory of the 2021 season – can you share it with us?

A: So many amazing memories came from another unforgettable season. If I had to choose one I think my favorite would have to be when we beat Great Valley 5-1, after being down 1-0. Great Valley has always been a tough opponent, and specifically for this game we had to face so much adversity. Many of our players had to step up and do what was best for the team. A couple of our players were out with COVID, one had a concussion, one with a torn ACL, and one of our field players had to play goal. This win showed the strength of our team and how much we all played for each other.

Q: How did you view your leadership role on the team (on and off the field) this fall?

A: For the entire season, my goal on the field was to lead by example. I have learned in the past that work rate and effort level has a ripple effect – if one person is working hard, then that will increase the intensity of the others around them. Off the field, my goal has been to be there for every person on the team. Togetherness is a very important part of a team and translates to how well a team does on the field, so trying to be close with everyone was very important to me.

A: I think that my strongest aspects are my technical ability on the ball and the ability to see the field well. The main part of the game that I am trying to work on is finishing and attacking 1v1. As an attacking mid I have to work on allowing myself to take on defenders and then finishing with a strong shot.

Q: Tell us a little about your start in soccer. Who have been your biggest soccer mentors, and what was the most important thing you learned from each one?

A: I have been playing soccer ever since I was two years old. There have been so many people throughout my soccer career so far who have impacted me and have greatly contributed to the person who I am today. Most of my technical side of the game has been taught by my first travel coach, Jeff Rhodes, who is the current Harriton girls’ soccer coach. My current club coach, who I have been with for the past five years, has taught me the importance of mental toughness and how nothing will ever come easy. Coach [Kevin] Ries, my high school coach for all of my time so far at Lower Merion, has taught me to never get too high on your highs and too low on your lows.

A: I like to imagine myself in different game situations. I think about what I am going to do in the game to help my team have success and how I am going to impact the play. Our high school team also has a big speaker that we love to listen to before games with the same playlist every time, which helps me and the rest of the team get excited and ready to play.

Q: You wear uniform jersey No. 8 for Lower Merion soccer. Why did you pick this number?

A: I actually really wanted No. 9 going into my freshman year because that was the number I wore every year in club soccer, but a returning player already had that number. So, I chose the closet available number to No. 9. And now I can’t imagine having any other number for high school soccer.

Q: Tell us a little about your club soccer career.

A: I played for Lower Merion Soccer Club when I was younger for about six years, and then when my team split because of the age change I moved to FC Delco, which at the time was called Continental FC. I stayed at FC Delco for a few years, and I am now currently playing for FC Bucks. Playing at a very high level and being able to develop so many lifelong relationships is what I love the most about club soccer.

Q: What is your favorite course at Lower Merion? What do you think you might want to major in at college? Is there a career field that particularly interests you at the present time?

A: I tend to enjoy many of the science classes Lower Merion has to offer, but I think my favorite course that I have taken so far is AP Biology. Biology is what I might want to major in college with the intent of hopefully becoming a doctor. I am not sure yet what specific kind of doctor I want to be, but I have always cared about people and have wanted to help in any way possible.