McCaffery: To the end, a Strath Haven team worth remembering 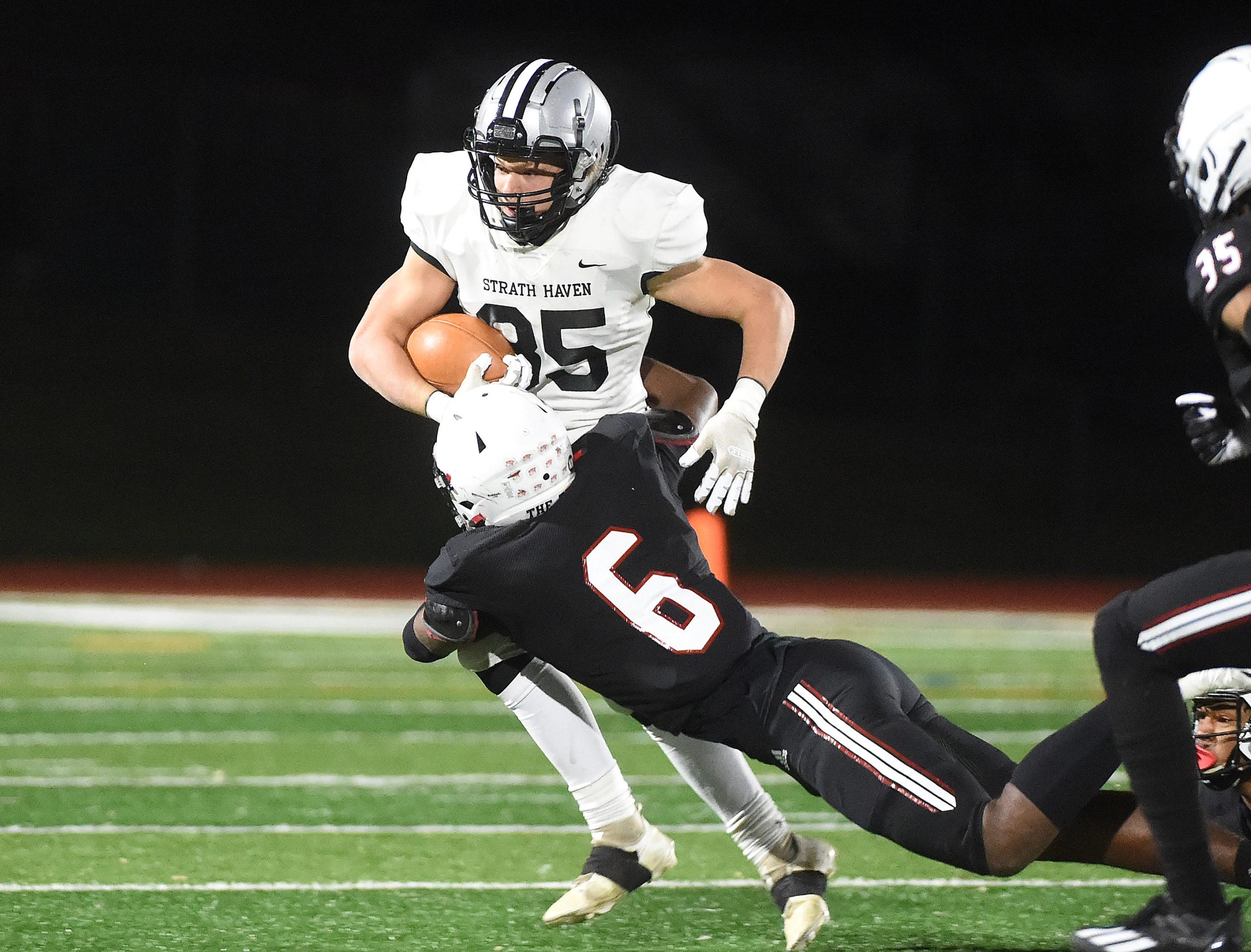 RIDLEY TWP. — The offense was the same, the defense the same, the silver helmets classic, the situation so familiar Friday night, even if it was nearly two-plus decades later.

There was Strath Haven competing for a spot in a state championship football game, facing Imhotep of Philadelphia for a bus ride to Hershey. Once, that was something of an expectation, the Panthers having played for a PIAA championship in both 2002 and 2001, that after winning it all in 2000 and 1999. But enrollments changed and the state-bracket classifications morphed and the Central League grew and Philadelphia teams got involved and the charter schools were born and the natural cycle of high school sports whirled.

As for Kevin Clancy, the winningest coach in Southeastern Pennsylvania history, he just kept at it, running the Wing-T, rolling out big linemen, typically competing for league championships and winning playoff spots and expecting, always expecting, the Panthers to make those two state championship teams proud.

His 2021 Panthers would  do that, finishing 13-2, losing only to Class 6A power Garnet Valley and then Friday, 36-0, to Imhotep Charter of Philadelphia at neutral-site Ridley in the PIAA Class 5A semifinal.

“You’ve got to look at it over 15 weeks, and the things that they did,” Clancy said. “They improved and achieved and from Week 1 through Week 15, it’s been unbelievable. They played their hearts out. Nobody quit in the fourth quarter. They battled. And that’s what I would expect of them.”

Clancy expected that in his first 30 seasons, as he expected in the final game of his 31st. It’s how he was able to keep Strath Haven relevant through so many changes and decades, and certainly into the Final Four Friday.

“It’s kind of neat to look back on those championship teams,” Clancy said. “We’ve had celebrations of the 1999 and 2000 teams the last couple of years. They set up their tents in the end zone, and our current kids really admire them. They love seeing the old guys come back. They hear their stories and talk to them. Some of them come to the practice field. The other night, Pookie Johnson came back and talked to the kids.

“So the alumni contribution is very big.”

Johnson was with for the Panthers just after that four-year blast of dominance, then later played for the Denver Broncos, Tennessee Titans, Pittsburgh Steelers and Baltimore Ravens. The linebacker was in the pipeline that had previously sent Dan Connor, Mark Jones, Lamar Campbell and Isaac Jones to the NFL, and which kept the Panthers’ program strong for years after the championship runs, including a District 1 Class AAA championship in 2010.

Even as the Panthers – massive along the lines, expert at executing the run-oriented offense – rolled onto Phil Marion Field Friday, Clancy was convinced they belonged in the conversation with any of his teams, including those that won every Central League championship from 1996 through 2003.

“It’s a district championship team and it’s among the best we’ve ever had,” he said. “And they’ve done this for two years now. Last year, the Central League chose not to go to the playoffs. I think we would have had some success a year ago as well.

“We have some skilled backs. Our quarterback is playing great. But the line has been the foundation, and it has been for the last couple of years.”

The Strath Haven lines were challenged by Imhotep, which was just as big. That dependable Strath Haven runner Matt Shuler was out with a shoulder injury didn’t help, but that’s why it is so difficult for any team to go enjoy a spotless postseason.

Clancy has had two.

If the trend holds, he will continue to have chances at a few more.

“I didn’t know that I’d still be coaching that much longer after those teams,” he said. “But it’s been fun every day. And we’ve had other teams that were real good, and with a break here or a break there, something may have gone a little different for us somewhere along the line.”

There have been great teams and good teams in the Clancy Era. The 2021 team should roll into school lore as one of the best.

“The 20th anniversary of the state championship team was this year, so we got to see all them come out,” said Sam Milligan, the Panthers’ quarterback, punter and defensive back. “They were honored. I got to meet all of them. My uncle, Jeff Milligan, was on that team. That was awesome. It’s something we all want: To have our own tent back there and come out and be recognized.”

They didn’t win a state championship, but they came within four quarters of playing for one. Some years, and this was one of those years, that was more than enough for another Strath Haven team to never be forgotten.