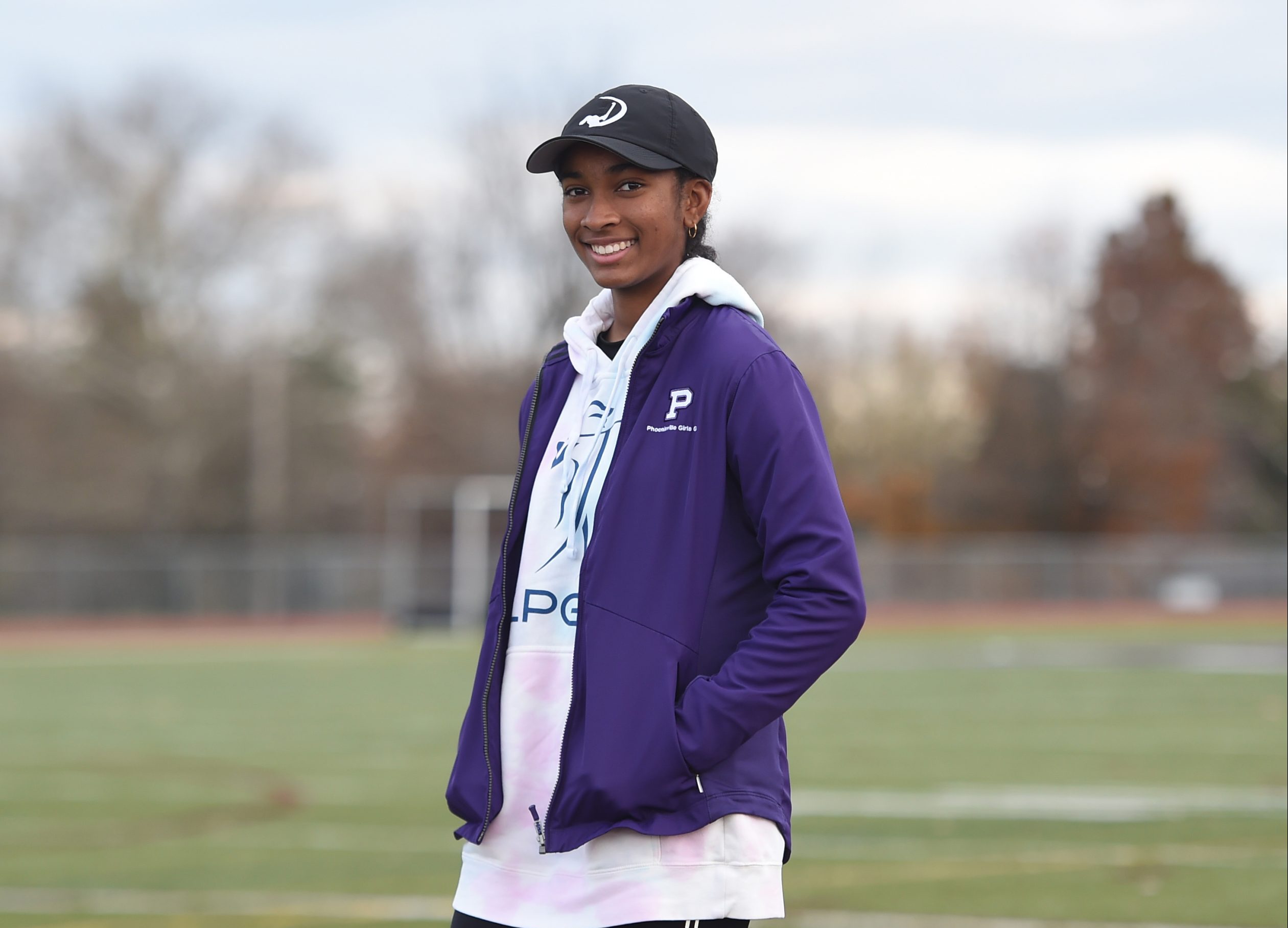 “She’s very reserved and very quiet and very thoughtful, but she definitely sets her intentions out on what she wants to do,” Waltz said.

Heading into the 2021 season, the largest of Roberts’ intentions was to advance the PIAA championships for the first time.

In a season that earned her the 2021 Mercury Girls Golfer of the Year, that’s exactly how Roberts ended her sophomore campaign by earning herself a place in states at Heritage Hills Golf Course in York.

“One thing that stuck out to me was the amount of girls from Phoenixville who came out to play golf. They created a great environment for me to just relax and have fun.”

She became the first Phoenixville girls golfer to qualify for the PIAA Championships.

“She came into the season saying she wanted to get through the second day of districts and get to states,” Waltz said. “I was happy to accommodate that ride with her. ‘OK, let’s do it!’ Her father (Kenny) is an assistant coach for me and we just said, ‘All right, this is the goal, this is what we want to do,’ and Kate made it happen for all of us. We’re quite proud of her accomplishment. Phoenixville is super proud of her.”

Roberts’ earliest introduction to golf came riding in the golf cart when her father Kenny, who joined the Phantoms’ coaching staff as an assistant this year, went out to play.

She grew an appreciation for the game watching on television with her father before beginning to work on the sport at Phoenixville Driving Range (formerly Ralphie’s) and started to play in tournaments around fourth grade.

“My dad would put it on and I’d love to watch and eventually it evolved into a love of playing it,” Roberts said. “I remember my first official tournament was at Spring Hollow. It was my first time playing real tournament golf, and I met some nice girls. It was fun to play, just get to know what that type of golf was like.”

“It took a while as all things do. I naturally loved it but had to work to get good at it,” she added.

Along with tournaments on the weekend, Roberts and her father are often found at the range or out on the course, typically at Turtle Creek, which is the Phantoms’ home course and the site of the second day of the District 1 tournament.

“She’s gritty. She’s really gritty,” Kenny Roberts said. “The game doesn’t come easy to Kate, but she works really hard at it. Her sheer grit, sheer determination to want to get better is what I’ve continued to watch blossom. She just works hard at it, just works really tirelessly hard at the game to try and improve.”

Roberts put together an impressive freshman season in 2020 that saw her finish fifth in the Pioneer Athletic Conference with an 83 at Gilbertsville that was nine shots off the lead.

She followed that with a 10th place finish in a reduced district field, shooting an 81 on the first day at Raven’s Claw to survive the cut line and following with an 80 at Turtle Creek on the second day. She missed states by eight strokes.

“It was really fun,” Roberts recalled of the experience. “I enjoyed meeting other girls who played high school golf and then I was really happy I made it to Day 2. Then it was like a baseline for me to see what I can improve on for this year. I knew the format now, I knew what it would be like. Even though last year was a crazy year, I had at least a little set of expectations.”

With her goals set, Roberts made giant strides in her sophomore season.

“I was playing with two girls who had won the PACs before and it was great to play with them,” Roberts said. “We had a lot of fun, and it kind of proved that I had really come that far to win PACs.”

She rode that momentum into districts where an even-par 70 on the first day of competition at Raven’s Claw put her in third place — four strokes off the lead. Playing in the final group, Roberts shot a 74 on the second day at Turtle Creek.

Roberts finished her second try at districts in sixth with a one-over 144 for sixth place, which was just six strokes behind Lower Merion’s Sydney Yermish and a 17-stroke improvement from her freshman season.

“It’s a little different from the year prior because this year I was in contention and getting to states was definitely a goal, but so was winning the entire district,” Roberts said. “It was a little bit of pressure, but playing at Turtle Creek, playing at my home course, after I got into the flow of things the pressure kind of disappeared, and I started playing my game again.”

Playing with two former District 1 champions in the final group on the last day of a tournament might have been too much for some sophomores, but she stayed within herself to become the first Phantom to earn a trip to states.

“She doesn’t get intimidated by what’s going on around her, in fact she gets excited when she gets to play with the better girls,” Kenny Roberts said. “She just played her own game, she stayed focused on her own game. She knows some of the girls are hitting much further, they might be better putting, but it doesn’t daunt her, it doesn’t fade her.”

Roberts hoped to crack the Top 10, but she finished her season tied for 12th in the state with a seven-over 79 at Heritage Hills, leaving plenty to shoot for in her final two seasons with the Phantoms.

“The goal is always just to get better, try and improve,” Roberts said. “Sixth in the district, try to improve that and try to get back to states. Even though you made it one year, making it the next is not a given.”

Roberts, recently named the Philadelphia Junior Tour Girls 16-18 Player of the Year, already started to set forth goals for next season. Her sophomore campaign suggests there’s a good chance she will achieve them.

“I know the goal for next year is definitely to make the Top 10 and even be in the Top 5 at this point,” Waltz said. “I really think she can do that. She just needs to get a little bit stronger and I think that will happen as she grows into it, but she’s definitely right up there with the top of the top players.”