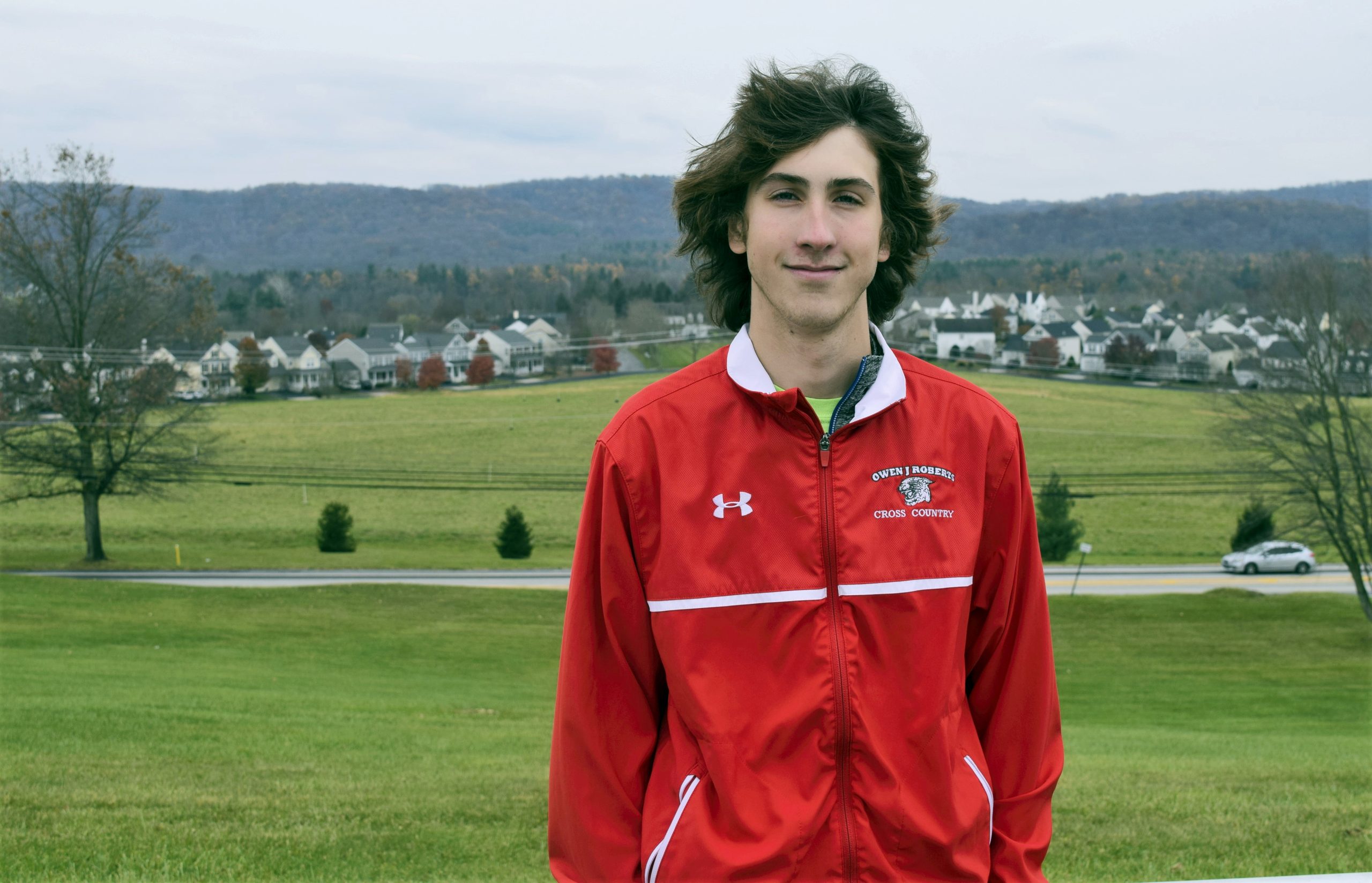 But for Andrew McGonigle, being named The Mercury Boys Cross Country Runner of the Year does not so much mark the completion of a journey. For the Owen J. Roberts junior, there is still more to accomplish before he reaches the finish line on his scholastic career.

To be sure, McGonigle made some big strides as he and Pennsylvania’s distance-running competitors came back from a year of COVID-19 restrictions and limitations this fall. The Owen J. Roberts junior capped his run through the Pioneer Athletic Conference by winning the league’s championship meet in its return to the 2021 slate, covering the course at Heebner Park in 16:11.

During the regular season, McGonigle won Liberty Division races against Boyertown (16:35) and Spring-Ford (15:43) while tying teammate Thomas Damiani in the Methacton meet. He crossed the line at PACs five seconds ahead of the Warriors’ Vaughn Lackman, 27 seconds in front of Methacton’s Bryan Landsberg and 30 in front of Damiani.

“It was nice to come in, knowing what we had to do in bigger races,” he said. “Just thinking through dual meets, which are more strategic. It was nice be able to relax those days, maybe get workout in.

“I thought it was really good to get back to different competition,” he added. “Running just PACs last year, we saw the same people. This year, we saw people we’d compete against in states and bigger level. It was nice to see where we were at.”

McGonigle got a better look at where he stood in the state the week of Sept. 25-Oct. 1, competing in the prestigious PIAA Foundation Invitational and the Paul Short Run. In the races, held on courses where district and state-level championship meets were to be staged, McGonigle headed District 1’s contingents both times.

In the Foundation Invitational at Hershey’s Parkview Course, McGonigle was second in a time of 16:33. The Short Run at Lehigh University’s Goodman complex saw him place fourth in the Brown race with a time of 15:24.10.

McGonigle hit one of his benchmarks in the second of two races at Lehigh at the end of October. Off his fast time in the Paul Short Run’s Brown race, he ran a 15:39.70 in the District 1 Class AAA race, placing sixth as part of a 4-5-6 run by PAC representatives headed by Lackman and OJR teammate Damiani.

“I’d say I really wanted to win PACs, win districts, be able to compete in states and get a state medal,” McGonigle said. “I had time goals. My focus was on actually competing later in the season, not so much time goals.

One aspect of his racing style McGonigle seeks to improve is finishing faster. The way the district race played out didn’t work in his favor.

“It was really windy, and nobody wanted to take it,” he said. “It was a slow race that came down to a sprint finish. That’s not my strength.”

It hasn’t been for a lack of focus on that aspect. McGonigle and his teammates generally do a lot of strides after practice … 200s and 150s, “when the legs are tired, to get them moving again.”

“I think its progressed more since I was a freshman,” he said, “but it’s still a weakness. I want to get better on that this winter and spring.”

McGonigle also saw benefits in familiarity with OJR’s home course at Warwick Township Park, with three hills on the course’s south side.

His head coach, Tim Marcoe, noted McGonigle coming to his attention when he was in middle school.

“I was aware he was a talented middle-school runner,” Marcoe said. “He understands how to race. He’s savvy. He knows how to pace himself well.”

A particular “downer” for McGonigle this season came at states, where an illness left him finishing far back in the field, about one minute (17:35.80) off the time he ran at Hershey earlier in the season.

“I woke up couple days before with strep throat,” he recalled. “I tried my best. I took off not the day before, but two days leading up to states. I wasn’t able to move much without feeling really sick.”

When he first got sick, McGonigle went to get COVID and strep tests. He noted the COVID test came back negative, but the strep test was positive.

“I’d thought I’d get on antibiotics and it would help,” Andrew said. “I thought I was better, but my body wasn’t ready for that. I was asking too much of my body to go out and give a good effort. I went out fast, thought I was good to go. But I paid for it later on.”

“He’s tough, but quiet about it,” Marcoe added. “He fights to the end.”

This past weekend, Andrew joined Damiani and girls’ team standout Claire Zubey at the Eastbay Northeast Regional at Van Cortlandt Park near the Bronx, N.Y. With that as the finale of his cross-country season, McGonigle is now looking toward competing with Owen J’s winter and spring track teams.

“I was happy really happy starting out,” he said. “It was a good start to the season. I had some really strong races. I was happy way PACs came out. But it left a bad taste in my mouth, the way I finished last two races. It (districts) didn’t feeling like a good race to me.”

In conjunction with distance races, McGonigle is looking to be part of the boys’ 4×800 relay team for the Wildcats’ track squads.