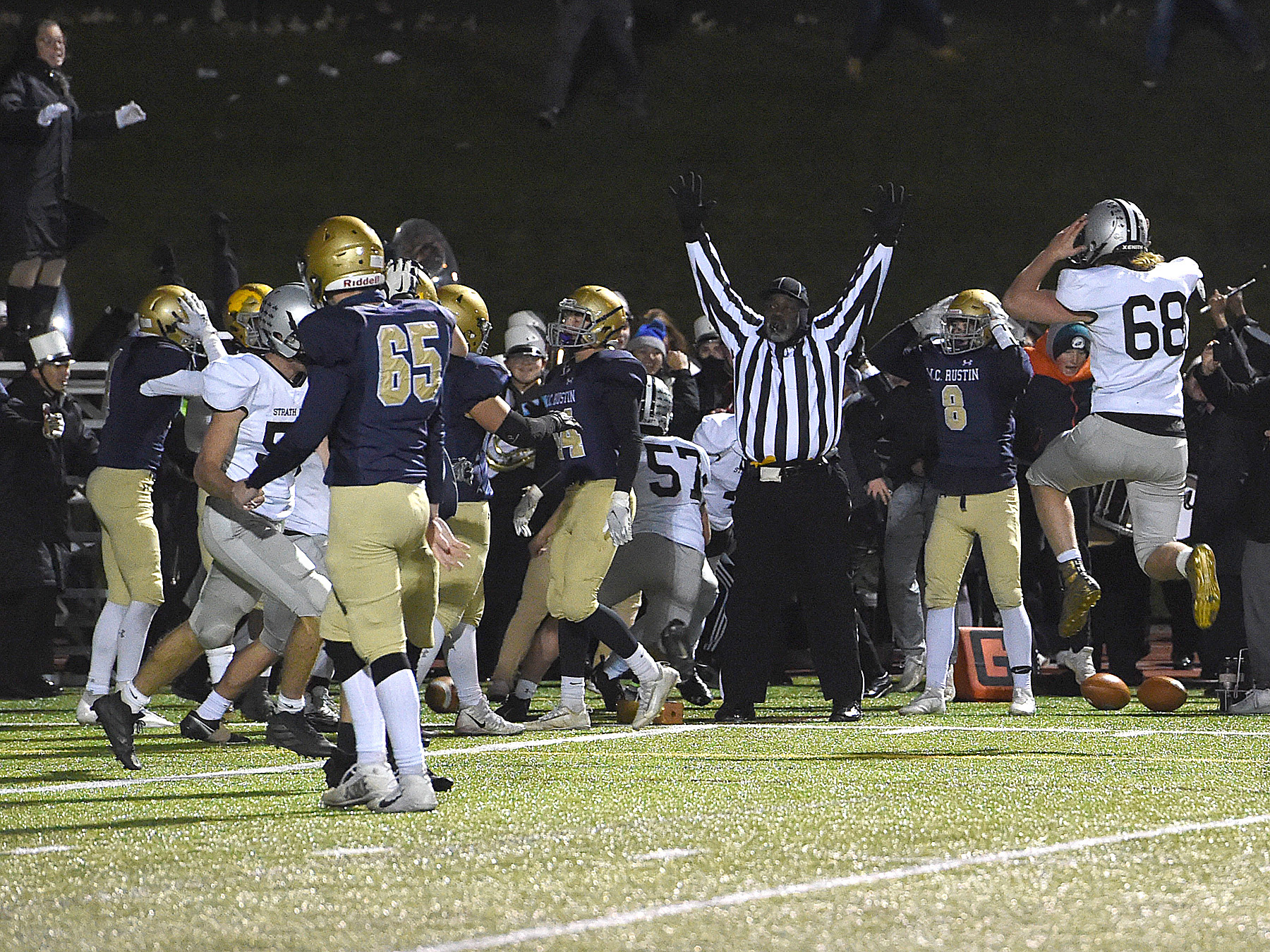 WESTTOWN >> Sometimes wanting something with every fiber of your body and playing like your life depended on it does not get it done.

A valiant effort by the West Chester Rustin football team fell short Friday night as visiting Strath Haven quarterback Sam Milligan rolled right and got into the end zone for a successful two-point conversion for a thrilling 34-33 double-overtime victory to capture the District 1 Class 5A title.

West Chester Rustin (11-2) looked like it had the game won in regulation when Dayshawn Jacobs capped off a six-minute fourth period drive with a two-yard run to make it a 19-19 game with 16 seconds left in the fourth period. The Panthers (13-1) then jumped offside twice on the extra point try with the ball going through the uprights twice successfully. But, the referees blew both plays dead and on the third attempt the snap was bobbled and the game was tied 19-19 at the end of four periods.

Rustin running back Dayshawn Jacobs runs in the first quarter of the District 1 5A District title gam. (PETE BANNAN – MNG)

“The first offside was accidental but the second one was intentional,” West Chester Rustin head coach Mike St. Clair said. “And the refs should have done the right thing and swallowed the whistle. It was a bush league thing to do and our kids deserved better tonight.”

Both teams ran their Wing T offense to perfection as the Panthers got out to a 19-13 lead after three periods after taking a 13-6 halftime advantage. But the Golden Knights, behind Jacobs, who rushed for 190 yards and three touchdowns, methodically ran the ball down the field in the fourth period behind their big offensive line. With a 4th-and-3 at the Panthers’ 21-yard line, Rustin quarterback Kolbe Freney hit Mike Lighthill with a perfect pass down to the Strath Haven 5. Two plays later Jacobs cracked over from the left side and it was a 19-19 game with 16 seconds to play and the extra point drama began and the teams went to overtime tied at 19-19.

In overtime with both teams’ possessions beginning at the 10, Strath Haven got the ball first and scored on its first play as Milligan hurdled the left side for a 26-19 Panther lead after the extra point kick. On the Golden Knights first play, Jacobs scored from 10 yards out and the Golden Knights called timeout to go for the two-point conversion. But a false start call on Rustin forced them to kick the extra point and after one overtime it was a 26-26 game.

“Losing like this really hurts but I will have a bond with these guys the rest of my life,” Freney said. “And we did not get some calls tonight but we left it all out on the field and that is all you can ask.”

Now, double overtime began and the Golden Knights again scored on their first play as Jacobs juked his way for a 10-yard touchdown and it was a 33-26 West Chester Rustin lead after the extra point. Strath Haven worked the ball to the Golden Knights’ 1 on three running plays, setting up a 4th-and-goal at the 1-yard line. Chase Barlow, who led the Panthers with 110 yard rushing, cracked over the right side and barely got in the end zone and now it was decision time for Strath Haven.

Rustin quarterback Kolbe Freney is caught behind the line by Strath Haven by (68) Ben Farbaugh and (84) Mason Green in the first quarter of the District 1 5A District title gam. (PETE BANNAN -DAILY LOCAL)

After a Panthers time out, Milligan took the snap and rolled to his right and looked like he wanted to pass the football. But, Milligan pulled the ball down and made a mad dash for the right corner of the end zone, barely getting in and the Panthers had a pulsating 34-33, win and a District 1 5A championship and a date with the winner of the Erie Cathedral Prep against Imhotep Charter game Saturday, while the Golden Knights season ends in bitter fashion.

“You have regrets whenever you lose a game,” Jacobs said. “And tonight we did not get many calls but I don’t want to make excuses. I am real proud of this senior class. When we were freshmen we went 0-8 and did not win a game and now as seniors we are in the district championship. It took lot of hard work to get here.”