Second time is the charm for Ellis, Upper Darby in ending Haverford’s streak 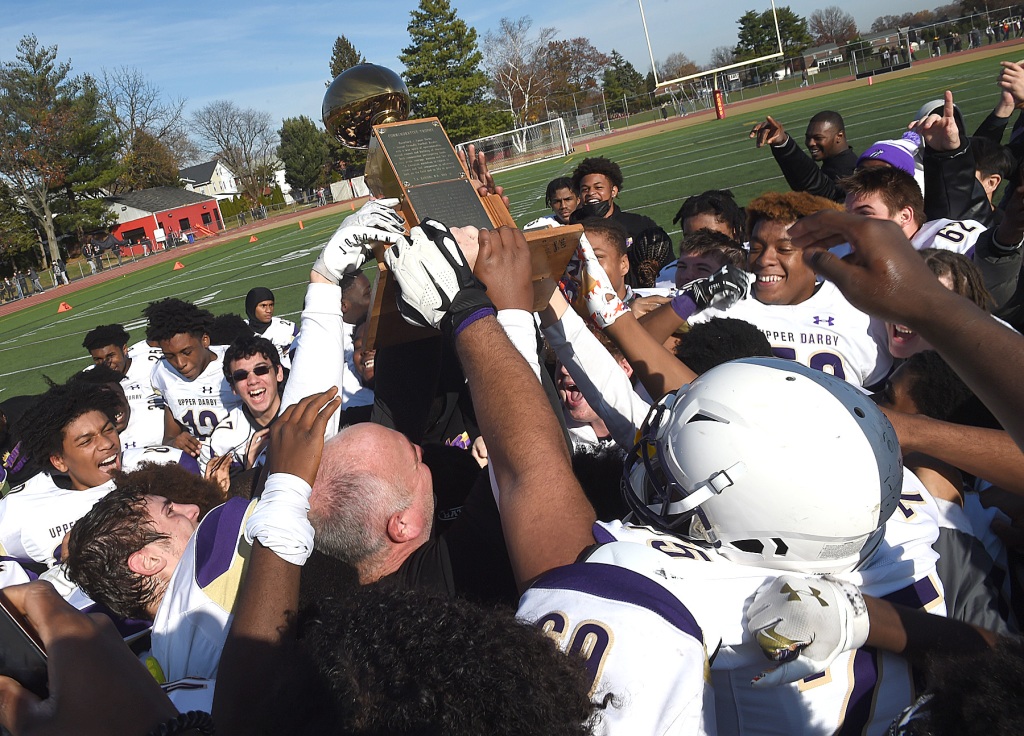 Upper Darby coach Dave Barr and his team celebrate with the trophy after beating Haverford, 28-21, Thursday. It's the Royals' first Turkey Day win over Haverford since 2009. (PETE BANNAN - DAILY TIMES)

HAVERFORD — To prepare his team for its annual Thanksgiving Day showdown with archrival Haverford, Upper Darby football coach Dave Barr had the Royals do every drill in practice exactly 11 times.

That was one repetition for every year since Upper Darby’s last won in the series, excluding last year’s date, which was canceled due to the coronavirus pandemic.

“We wanted to remind them how long it’s been,” Barr said.

Quarterback Montez Ellis and receiver Covenant Horace only needed two tries to produce the touchdown that ended that drought.

Ellis and Horace hooked up on a 31-yard TD pass with 26.1 seconds left to give the Royals a thrilling 28-21 come-from-behind victory over the Fords at A.G. Cornog Field Thursday.

“I can’t express how happy I am,” senior two-way lineman Julien Laventure said. “This is unbelievable, something I’m going to remember forever. It’s something I’ll tell my kids about some day.”

His children better be in for a long story about a back-and-forth battle. The first half was a defensive slugfest that turned into an offensive showcase after the break and went down to the wire like so many other games in a series that began in 1921 and was being played for the 99th time.

“You look at all the scores of Haverford-Upper Darby and there are a lot of 28-21 games on that list, so this is in line with what happens in this game,” said Haverford coach Luke Dougherty, who like Barr was coaching in his first installment of the rivalry. “I’m proud of our kids. I wish we came out on the other end but we’ll grow from it and learn from it and I can’t thank our seniors enough for a great year.

“Upper Darby has a great football team, and Dave does a great job, nothing but class. They deserved it today. Both teams fought hard, but they deserved it. They made more plays at the end of the game so we have to give them their due. They earned it.”

It wasn’t decided until Ellis, who was selected as the offensive MVP of the game, and Horace hooked up for the second time in the game, this time with the clock winding down. And they did so on the exact same play they missed on one play earlier. On second-and-10, Ellis had looked for Horace on a pop pass over the middle but threw the ball behind him for an incompletion.

“It was a little run-pass option,” Barr said. “’Tez could take it straight ahead but depending on where the linebacker and safety were, or he could throw it. We thought we had it on the play before. Coach (Ryan) Dabney and I looked at each other and said, ‘Let’s run it again.’”

It was a good call.

It was an exciting conclusion to the traditional Thanksgiving game between Upper Darby and Haverford as UD senior Covenant Horace hauled in a touchdown pass late in the fourth quarter to lift the Royals past the Fords, 28-21. (PETE BANNAN – DAILY TIMES)

Horace was open, again, and this time Ellis hit him in stride. After catching the ball, Horace cut to his right and raced untouched into the end zone to give the Royals (6-5) a 26-21 lead. Marcus Kemp muscled in for the two-point conversion that provided a seven-point cushion.

“We knew the safety wasn’t going to be there,” Horace said. “Tez put the ball in my hands, and when the safety came back over I had to make a move to get to the end zone.”

Horace’s touchdown capped a wild second half that featured three scoring plays of 50 or more yards, two lead change and a pair of Royals TDs in the fourth quarter.

Donte Shaw raced 50 yards for a TD while Ellis was battling cramps to tie the game, 14-14. On the first play of Haverford’s next possession, Christian Pergolese sprinted 70 yards to put the Fords back on top, 21-14.

Ellis returned and went 69 yards to get the Royals within 21-20. He cramped up again as he approached the end zone but managed to limp across the goal line on basically one leg.

“I was determined to score,” Ellis said.

After the teams exchanged punts three times, the Royals got the ball back at their 42 with 3:56 to play. Ellis, who ran for 193 yards and a touchdown and threw for 49 yards and two scores, methodically worked Upper Darby into scoring position. He ran 12 yards on fourth-and-6 to convert a huge first down that kept the drive alive.

Ellis then maneuvered the Royals to the Haverford 31. His first-down pass attempt was blocked at the line of scrimmage by Haverford defensive end Peter Corcoran, who was selected as the game’s defensive MVP. Ellis missed Horace on second down, but he wouldn’t miss his next chance.