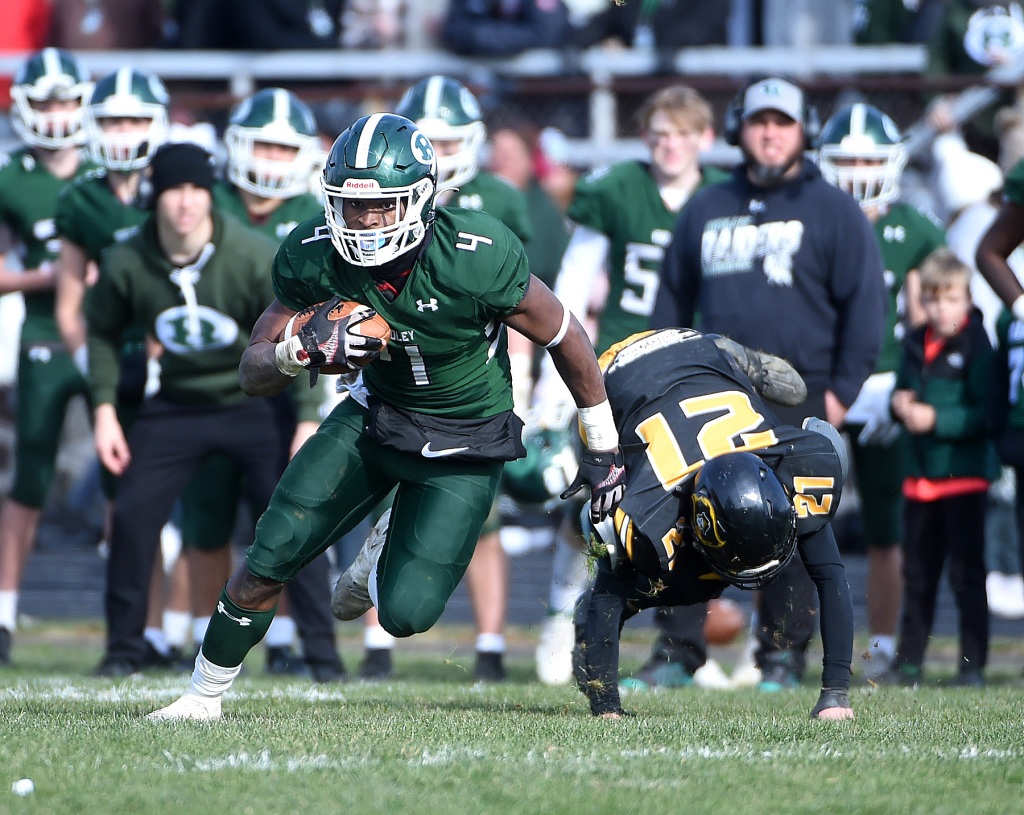 GLENOLDEN — Tahir “Tubby” Mills might need a new nickname after Ridley’s 34-22 victory over Interboro on Thanksgiving.

The senior running back can be called simply, the greatest.

Mills ran for 112 yards Thursday and finished the season with 2,521 yards, the most in Delco history, surpassing Isaiah Bruce of Upper Darby’s output of 2,450 yards in 2015.

The humble Mills might also start going by the name Hollywood. A half hour after the Green Raiders’ victory, he was still on the field, signing autographs for the throng of young fans he gained during his historic 2021 season for a resurgent Ridley program. Mills put his John Hancock on jerseys and footballs for young boys who treated him like a local hero.

Had he been practicing his signature?

Ridley (12-2) didn’t win a Central League championship and fell a game short of playing for a District 1 Class 6A title, but the team left a big impression on its football community. In 10 years or so, those same kids asking for autographs could be the next great generation of Green Raiders.

“It’s definitely a great feeling,” said senior quarterback John Heller, who completed 21 of 29 passes for 268 yards and a pair of touchdowns. He joined an exclusive class of Delco quarterbacks with 2,000-plus yards in a season, ending the year with 2,197 yards and 26 TDs.

“Just having the little kids around, they come up to you and stuff, is something cool,” Heller continued. “And I think it just gives them the Ridley spirit. Hopefully it will make them want to play football more and know what it takes to be a Ridley football player.”

Ridley quarter John Heller runs for a first down in the third quarter against Interboro Thursday. (PETE BANNAN – DAILY TIMES)

Mills tied the county’s rushing record with 41 yards on Ridley’s first series. The 11-play drive chewed nearly six minutes of clock and ended when Mills rumbled three yards across the goal line. A six-yard gain on Ridley’s next drive gave him the record.

“All I worried about was getting the win,” Mills said.

Interboro showed plenty of fire in the first half. Junior running back Abu Kamara went for 116 yards on 18 carries, including a 41-yard run to the house in the first quarter. Kamara’s added the two-point conversion run to give the Bucs (3-9) an 8-7 lead.

“That’s what Bucs football is all about. Play hard, play tough,” Kamara said. “We’re always low on numbers, but it never matters to us. We’ll always play with a lot of heart and whatever the outcome is, it’s just what it is. But we fought today.”

Kamara and Mills posed together for pictures after the game. The two are old friends who played youth ball together.

Interboro’s defense tackled Mills three yards behind the line of scrimmage on fourth down at the one to close out the first half. The Bucs held an 8-7 lead at the break.

“We had to just keep our composure and our coaches were really honest with us because it shouldn’t have been that close of a game,” Heller said. “We’ve been firing on all cylinders all season. … They definitely did some good things (on defense). They studied some films and tried to do a similar version of that, but then we adjusted in the second half and started throwing the rock a little more. Once we tried to spread them out we did whatever we wanted against them.”

Zakee Brooks with the INT for Interboro!

Interboro gave the ball away on its first possession of the second half. Ridley’s offense went to work as Heller connected with sophomore wide receiver Khameen Powell for the first of his two touchdown catches in the second half. Later in the period, Mills ran five yards to the end zone to put the Green Raiders in front 21-8. Mills would add a third TD to finish with 36 total touchdowns on the year, one shy of the Delco record.

Once Ridley gained control in the second half, tempers flared on both sides, resulting in several 15-yard personal fouls. An Interboro lineman was ejected for a dirty hit after a play was ruled over. After Interboro’s Robert Forbes ran for a TD with 17 seconds left, Ridley decided to run one more play on offense instead of taking a knee. Heller threw a long pass that was intercepted by Interboro senior Kaden Walsh. The Bucs were not happy, but Ridley coach Dave Wood offered a perfectly reasonable explanation.

“In this game, you play it until the end,” Wood said.. “We weren’t happy with how that last drive went down where they scored, to be honest with you, so we wanted to try to execute something there. We didn’t, but we were going to give it a try. We’re going out there for four quarters and playing football, you know what I mean? It’s the last game for everybody. Go out and keep playing until it’s over.”

Heller spread the ball around to five receivers. Powell had five catches for 112 yards, and junior Paul Jackson had four receptions for 47 yards. Heller’s 2,197 yards are the most by a Ridley quarterback since Colin Masterson in 2009.

“I think we set the tone for next season and especially for the young guys that are going to be filling our positions,” Heller said. “I think they kind of know what it takes now to play at a top level, to be competing for the district title and the Central League title. And also the meaning of the Turkey Bowl. The young guys definitely saw the history of this game and how important it is to the community.”

Box saves best for last to help Marple Newtown go out a winner
Second time is the charm for Ellis, Upper Darby in ending Haverford’s streak