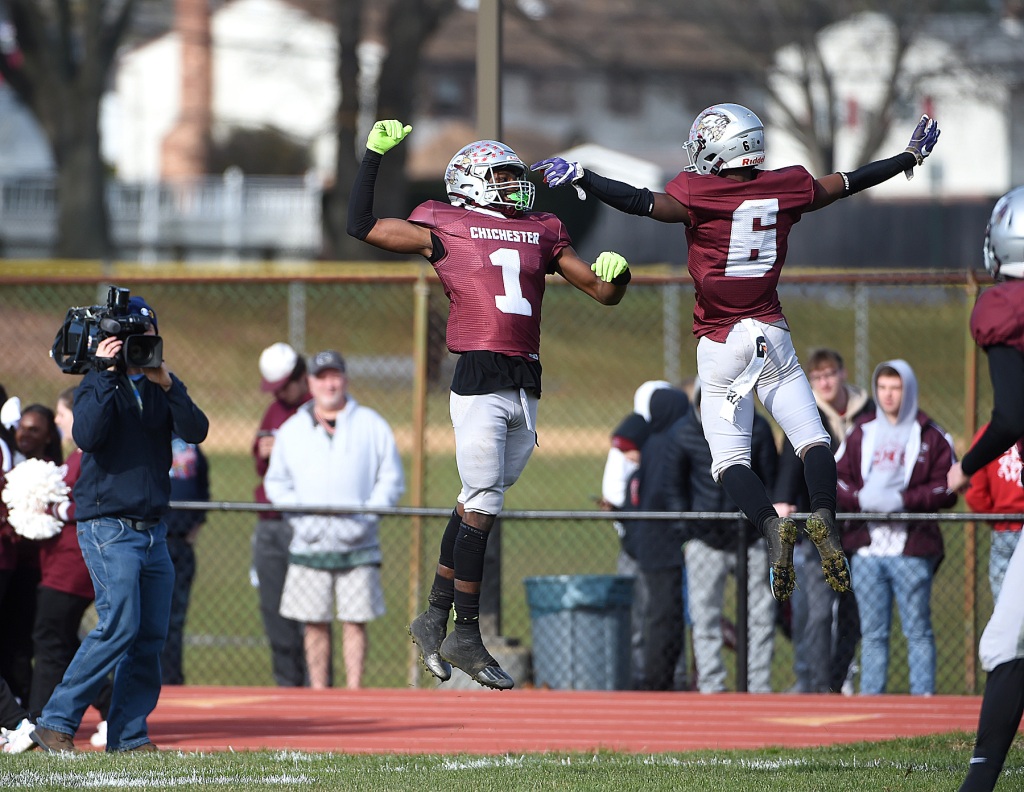 UPPER CHICHESTER — Two years ago, there was a chill in the air and the winds were howling as Chichester earned another Thanksgiving Day victory at Sun Valley.

Last year, Chichester did not play football in the fall, so Anthony Apichella Memorial Field sat idle on Thanksgiving Day.

With plenty of sun, agreeable temperatures and enthusiasm on the rise for the Chichester program, which claimed a share of the Del Val League title last month, the stands were packed as the Eagles played host to the 53rd Turkey Day meeting with the Vanguards Thursday morning.

Chi senior Idrees Holloman, a first-year varsity player who had never suited up for a Turkey Bowl game, made his one and only finale appearance one to remember, throwing three touchdown passes to help the Eagles to a 21-0 win in Ed Buck’s first season as their head coach.

“I was an assistant at Upper Darby for two years, but we never won the Thanksgiving game when I was there,” Buck said. “We talked with our players for a long time about how we knew (Sun Valley) would be coming over here and giving it their best and how we had to be ready for that and do our own thing.”

Holloman’s thing was finding open receivers, which he did for a scoring play in each of the first three quarters.

“What I did was because our line and our receivers were great,” Holloman, who was 10-for-13 passing for 168 yards, said.

Andrew Foster, Kareem Ballard, Jake Maiale, Connor Mullin and Eyan Thomas were the linemen who kept their quarterback happy. Buck is delighted that all but Maiale are juniors.

Holloman said that he and his receivers, including senior Eddie Swinton and juniors Quadir Blackwell, Staring Reaves and Erskine Wilson, worked off scouting reports and knew coming in what they wanted to do against the Sun Valley defense.

“They were in a zone,” he said. “I could see things and check off and (the receivers) were out there where I could get the ball to them.”

Sun Valley sophomore Noah Griffin picked off a Holloman throw on the fourth play of the game.

“We know we have to work harder in everything we do,” said Griffin, who added another pick in the fourth quarter. “This team is like a family, and it really hurts to see the seniors go out like this.”

Four plays and one penalty later, it was Swinton sprinting behind the defense and pulling in a perfect pitch from Holloman on a 75-yard scoring play. Reaves was supposed to hold for the extra-point kick, but he bobbled a low snap before getting up and throwing to Wilson for two points.

Chichester’s Quadir Blackwell brushes aside Noah Griffin as Chichester defeated Sun Valley 21-0 on the 60th anniversary year of their local rivalry on Thanksgiving. The teams did not meet last year because of the pandemic. (PETE BANNAN – DAILY TIMES)

Chichester didn’t get the ball back until the second quarter was half over. The Eagles turned the ball over on downs 54 seconds before halftime, but Izayah Guy-Bruton’s interception gave Holloman the chance to complete a 48-yard scoring pass to Blackwell with 6.6 seconds to play in the half.

It took the Eagles just under three minutes to score on their first second-half possession, this time Reaves grabbing a 10-yard TD pass. AJ Ricco’s conversion kick closed out the scoring.

Buck was delighted with the way his players responded to the challenge of finishing their season with a 6-4 record.

“Our defense was incredible in the second half,” he said, after the Eagles limited the Vanguards to 27 yards of total offense after halftime and a game total of 96 yards.

Maiale, who was named a recipient of the Chester Chapter of PIAA Football Officials’ Martin Kennedy Memorial Scholar-Athlete Award earlier in the week, said that he and his teammates were dialed in on succeeding Thursday.

“We understood what we needed to do, and this is what it was all about,” he said, pointing to his happy teammates as they posed for pictures and took turns holding on to the Turkey Bowl Trophy, which had been presented following the final whistle by former Chichester head coach Ted Woolery.

Ellis, whose team earned two wins in his head-coaching debut, said he and his staff will work with their players to give them a chance to end next season on a good note on their home field.

“They gave me everything they had,” Ellis said. “We’ll have a lot of starters back and will work hard on having better things happen for that team.”