Thanksgiving Football: Upper Darby’s Barr appreciative of both sides of a storied rivalry 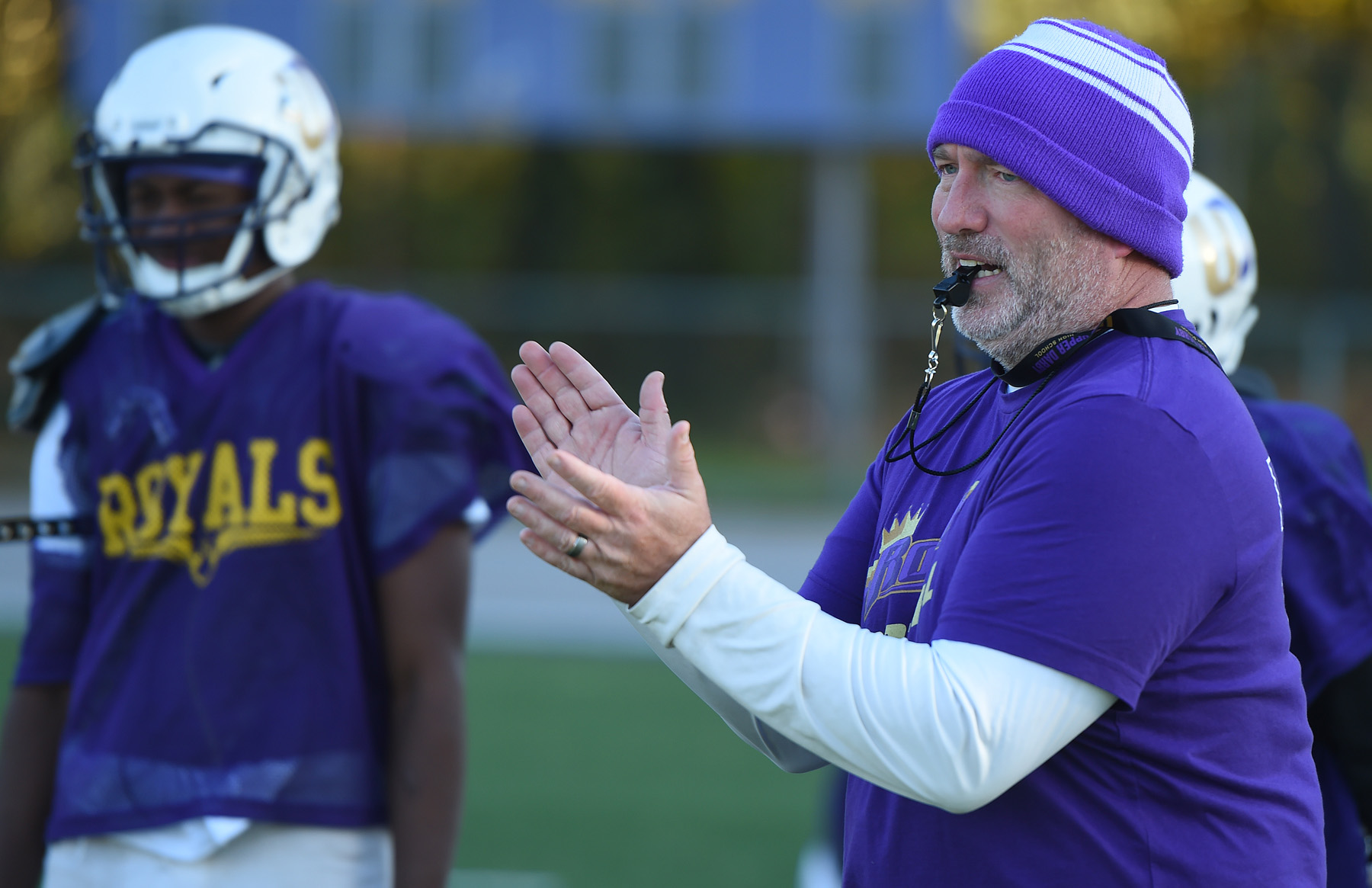 UPPER DARBY  — The year that Dave Barr became a first-time head coach of a varsity football program was the year most people wish they could forget.

The coronavirus pandemic forced the Central League to play an abbreviated schedule in 2020. That meant no district playoffs and Thanksgiving games.

Barr’s first game at Upper Darby was against Haverford, his alma mater, and his former coach and close friend Joe Gallagher. A game that for the majority of the last century had been reserved for Thanksgiving morning was played on opening night of a five-week season.

“It was our first game and we were not ready for that type of an opponent at all,” Barr said. “Unfortunately, we couldn’t play them again on Thanksgiving.”

Gallagher went on to retire following the season, meaning Barr wouldn’t have the chance to face off against his mentor on Thanksgiving. But he’s happy to establish a new rivalry within the rivalry, so to speak, with Haverford first-year coach Luke Dougherty.

Barr remembers the pride he felt playing in the game his junior and senior years in 1996-97. He hopes the same feeling will resonate with his players this year when the Royals (5-5) and Fords (5-6) clash at A.G. Cornog Field. Kickoff is 10:45.

“You know, it’s something that you went to with your best friends when you were little and you got to play in with your best friends when you got to high school,” Barr said. “When you were little, that is the game you looked forward to. You were engrossed in it being the biggest game possible. And everybody from the communities were there at that game. It had a huge feel to it. You saw that when you were little through the late-’80s and early-’90s, just how packed those games would get. Everybody knew it was the biggest stage you can have. Our guys are excited about that. … They know it’s going to be fun and this is what they’ve been working for.”

To get in the spirit of the holiday, Upper Darby players donated hundreds of items of winter clothing for those in need. Some of the senior players delivered the items to the Upper Darby Food Bank last week. The team also has a food drive going in November and December.

It helps to have mature leaders, such as lineman and senior captain Julien Laventure, at the forefront of Upper Darby’s charitable endeavors.

“Since Coach Barr came into this program, one of the biggest things we’ve done is… give back to the community and do what we can,” senior lineman Laventure said. “To even be on the team this year, we had to clean up blocks, picking the trash up in the streets. We love doing that stuff for the community because the community supports us and they love us. We love giving back and it feels great to do stuff like giving them coats and all that. We do it without giving it a second thought.”

The Royals enter Thursday looking to end a dubious streak. The last time UD defeated Haverford most players on this year’s teams were barely in grade school. Haverford has won 10 straight Turkey Bowl decisions. The series began in 1921 and Haverford holds a 49-43-6 edge. Thursday marks the 99th edition of the game.

Laventure played in the game as a sophomore in 2019 and is looking forward to helping the Royals get back in the win column.

“We know it’s the last high school game we’ll ever play, and know that it’s a definite on Thanksgiving morning against one of our biggest rivals,” Laventure said. “It’s definitely a motivator. When we didn’t get in the playoffs, it was like, OK, now we have Haverford. We have a month to shift the focus. As a team, we’re getting better and we are getting better as a school. As seniors we want to go out with the win.”

Junior quarterback Montez Ellis knows how important it will be to maintain focus for all four quarters. Ellis has excelled since moving from lead running back to QB1. In the Royals’ regular season finale against Upper Moreland, Ellis rushed for 320 yards and five TDs. The Royals have run two in a row. Haverford lost 42-0 at Garnet Valley in the first round of the District 1 Class 6A tournament.

“It’s going to go play by play. If you make a mistake, put it in the past and go on to the next play,” Ellis said. “Every rep we take on the field, we’ve got to stay focused and go all out. It’s a big game for everybody, especially the seniors, so everybody’s got to ball out. If we play to our full potential, (it’s) going to be a good game. And if everybody does their jobs, we’ll win the game.”

Haverford High is commemorating the 100-year anniversary of the rivalry by hosting Haverford and Upper Darby alumni sections near the snack bar, behind each team’s respective sideline.

In addition, the coaching staffs will renew their pre-game tradition of gathering at Perkins Restaurant on Lansdowne Ave. in the early morning hours before the game. That was one tradition Barr wanted to continue as an ode to Gallagher, his predecessor Rich Gentile and all the coaches who came before him.

“Coach Gal is my hero and I don’t say that lightly,” Barr said. “And it was ingrained by him — and other coaches, too — into me since I was young that it’s always somebody else first and then you. So, we’re trying to pass that on to these guys, that it’s about everybody else and then us. And they’ve bought into that full go since the beginning.”