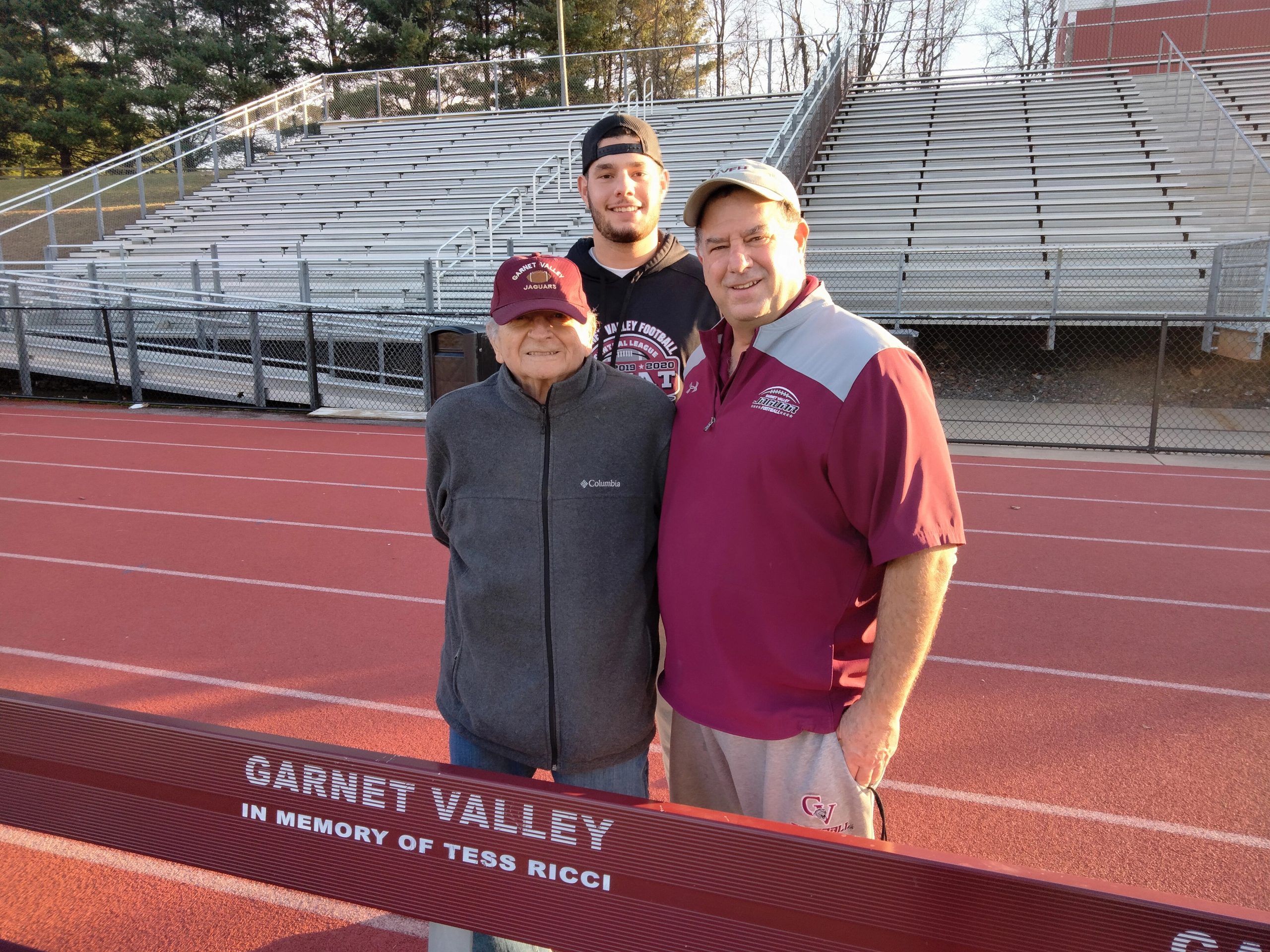 Mike Ricci, right, stands with his father, Len Ricci, left, and his son Jon Ricci, a GV grad who plays tight end for Delaware, near a bench on the sideline at Moe DeFrank Stadium dedicated to Mike's late mother Theresa 'Tess' Ricci.

CONCORD — The kickoff for the last football game Mike Ricci will ever coach at Garnet Valley High will occur around 7 Friday night. By then, everyone should be in place.

At the extreme left of the press box, Len Ricci, 84, will have leaned forward in his familiar seat.

On the kickoff team, Matt Ricci, an All-Delco wrestler, will have assumed a crouch, ready for a collision.

On the home side of the stands, Jon Ricci, Mike’s oldest son, will have joined nearly 100 former Jaguars teammates and football alums, including cousins Sam and Jake Morin, to enjoy the game. Nearby, Connie Ricci, Mike’s wife, will have been seated near her identical twin daughters Theresa and Natalie Ricci, the accomplished Garnet Valley field hockey players. HIs nieces, Gina Ricci and Coley Ricci, former Jaguars star athletes, won’t be far away.

And Mike Ricci, who will retire at the end of the season after a run of nearly four decades, will have taken a peek at the sideline bench, the one the Garnet Valley community donated to memorialize his mother, Tess Ricci, who died in 2015, but not after having seen every game her four children and eight grandchildren had ever played in or coached.

In three hours, there would be a PIAA District 1 Class 6A champion, either the Jaguars or the visiting Red Raiders of Coatesville. No matter how the scoreboard blinks, however, the Riccis, all of them, will have enjoyed the run together.

“When I was young, we were always taught: In an Italian family, it’s all about family,” Len said. “No if’s, and’s or but’s.”

That was the basis, one of them anyway, that elevated Mike Ricci to Delaware County sports legend, his 259 career victories second in the county only to Kevin Clancy’s 339 at Strath Haven. Family. His policy in his 35 years as the Jags’ head coach: Oneness. While many coaches embrace their alumni, few are as committed to it as Ricci, often surrounded by his former players after every home game. Shortly after a 58-39 semifinal victory over Quakertown, Ricci literally received applause from his players when he reminded them that, come a practice at 8 on Thanksgiving morning, a tradition will continue: Every former Jaguar will be invited, and few will decline.

“You get your normal Thanksgiving with your family and extended family,” said Jon Ricci, a University of Delaware tight end. “But then you also get that Thanksgiving with all your ‘brothers.’ That’s a tradition on its own, and it’s been really cool for the players. You have all your parents and alumni there, Dunkin’ Donuts on the side, some coffee. Then go have a big dinner, watch some NFL games, and then the next day get ready to play in a game that is absolutely big.

After practice, the Ricci family will gather at the nearby home of Pat Ricci, Mike’s brother, for the traditional meal, where the topic of the championship game is likely to arise, yet not necessarily dwelt upon.

“When we are home, it is never about football,” Jon said. “It’s more about father and son bond and how we can better that. Football was never important at home. If we talk about football at home, it will be, ‘How will the Eagles do this week?’ or something like that.”

On game day, though, that changes. On game day, Garnet Valley football is the focus, the Riccis and their extended family watching every play, every play call, and every facial expression or movement of the head coach.

Retired from a career as a Delaware high school teacher, Len Ricci – “Pop-Pop” to his grandchildren, who occasionally visit him in the press box during a game – was a third-team All-Delco back at Chichester in 1954. For 20 years, ending in 1980, he was a respected football referee in Delaware, where he knew he couldn’t officiate the games Mike was playing for Brandywine High, yet would cleverly design a counter play: He would work upstairs, operating the clock. That way, he would literally not miss a second of his son’s high school career.

With the PIAA postseason about to roll into its neutral-site phase, Friday will be the last time he will see his grandson, Matt, battle in a maroon-and-white football uniform, and the last time he’ll see his son coach a game at Moe DeFrank Stadium, named after a former Garnet Valley trainer and Len’s long-ago college roommate at West Chester.

Which one will be watching more closely?

“Both,” Len Ricci said. “Of course, I will be watching Mike, walking back and forth the whole time. And when he gets agitated, I kind of focus on him. Little things like personal fouls just drive him up a wall. He is so wrapped up in football and kids. He has been blessed. I don’t want to overdo it, but he has had the support of his administration, and support in the community. He loves the kids. And he can never say enough about his coaching staff. He has always been humble. And that is something that I am really proud of.”

At 12-1, Coatesville, which bumped the Jags from the 2019 tournament, has the potential to keep any opponent humble. But the Jags are 13-0 and have a leadership core unlike any other, Ricci says, in his 38 years of coaching. They are aware of the circumstances. They know they want to send their coach off in celebration, perhaps with one of the post-game fireworks displays that make Garnet Valley games an experience.

“Definitely,” said Matt Ricci, just back from a wrestling recruiting visit to West Point, a week after making a critical on-side kick recovery against Quakertown. “That’s important to me and it is important to all the guys on our team because it is our last home game, too.”

Since Garnet Valley had earned home-field privileges through the district championship game, Mike Ricci knew that any of his previous three games could have been his last on that field, a topic he had tried to avoid, stressing, “It’s not about me, it’s about the players.”

But Friday, it will be official, one way or another.

It will be the final time Len Ricci makes the 10-mile drive from Wilmington and is shuttled in a golf cart to his press box perch.

It will be the last time Connie Ricci gets to see one of her two sons play for her husband.

Assuming the next Garnet Valley coach continues the strong-alumni tradition, Jon and Matt Ricci will never be far from that sideline coffee urn on a chilly Thanksgiving morning. Yet that will feel different, too. It will have to feel different.

As for Mike Ricci, seven times a Central League championship coach, he will have defeating Coatesville on his mind. The nostalgia, he figures, will come later.

“After the season,” he said. “I know this is the last home game that we have at The Moe. It’s hard to believe when you look at the length of time that has gone by since I first started up here, and all the changes that have happened.

“But I’ll tell you what I do remember: I’ve gotten some very nice texts and emails from former players and students since I announced my retirement. And it just makes me realize how fortunate I have been to be in a school district like Garnet Valley, and to have the wonderful students and families and players that I have been able to associate with and get to know.”

Ricci, 59, could have coached for another couple of decades. But he chose to retire from coaching and teaching English for the most important reason of all.

“Jon will be a senior at Delaware in the fall, and I’ll be able to go to all his home and away games,” he has said. “My daughters, Theresa and Natalie, play field hockey. They’ll be seniors at Garnet Valley. I’ll get to go to their games. And my son, Matt, is likely going to end up at the Naval Academy or West Point and I want to be involved with that.

“So family timing was the reason.”

As Len Ricci learned from his parents and taught his children Mike, Linda, Patrick and Gary, that always comes first.