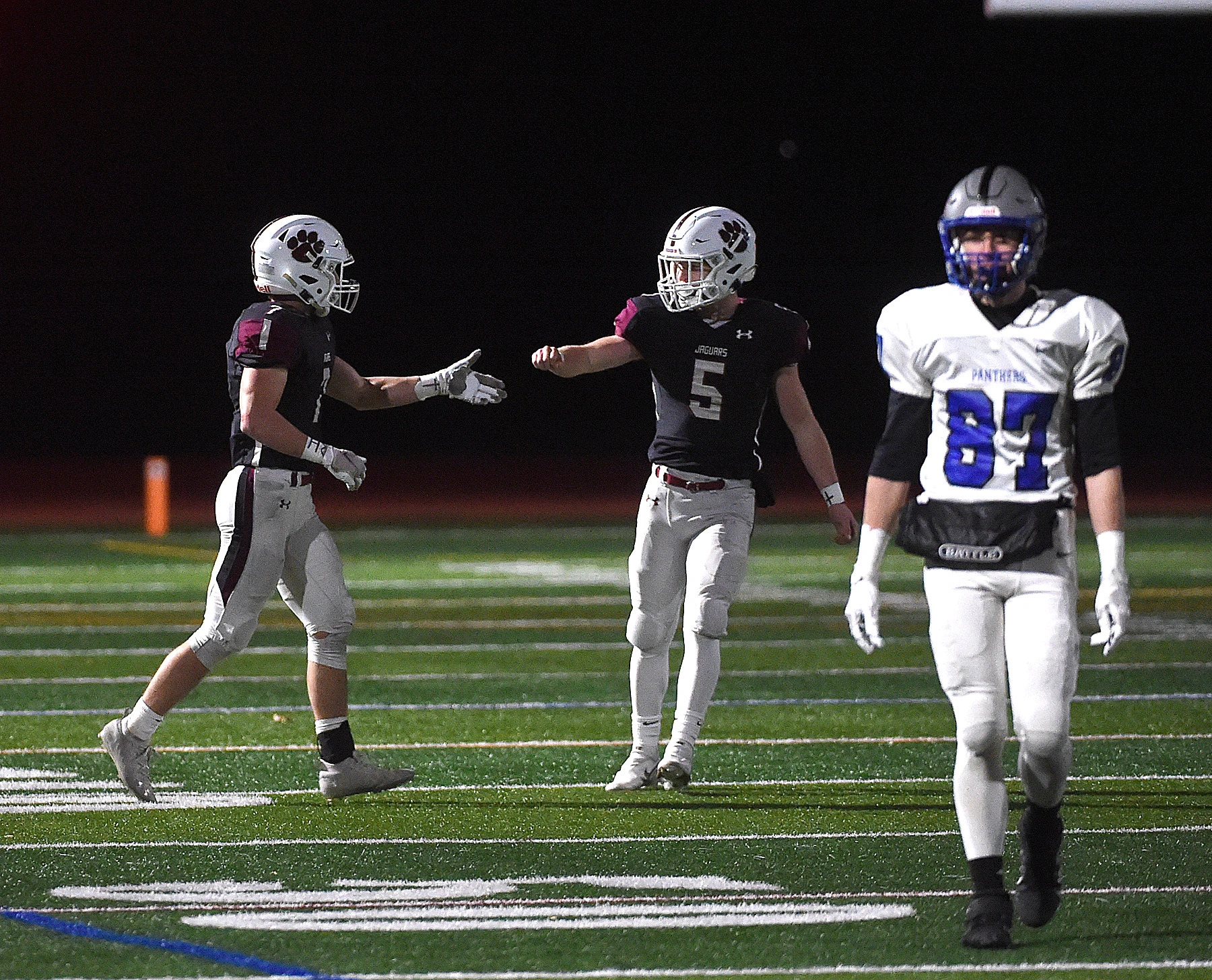 CONCORD — The deeper the Garnet Valley High football team rolls into the District 1 Class 6A playoffs, the more the reality grows clear: Some way, somehow, with whatever player is targeted on a particular drive, the Jaguars will find a way to score.

In a 58-39 victory over previously unbeaten Quakertown, which entered with a big and highly regarded defense, Reynolds rushed for 245 yards, scored four touchdowns and added a two-point conversion. Yet as overwhelming as the Navy-bound running back was, he had plenty of company at that end zone jamboree, with Ryan Saunders, Joseph Checchio and Joey Halloran each scoring at least one touchdown of 19 or more yards.

“They are,” Quakertown coach George Banas said, “a great team.”

Since both teams entered the district semifinal at 12-0, and thus with some measure of recognized greatness, the Jaguars figured they would face a test. For a half, that test was difficult, as the Panthers would carry a 24-20 lead into intermission.

“They put a sense of urgency into us,” Reynolds said. “We are used to situations like this. We had close games with Ridley, and then last week against Central Bucks West. When CB West challenged us, I told my teammates, ‘That’s what playoff teams do. We respond to adversity.’”

The adversity level peaked late in the half, just after a 49-yard touchdown pass from Max Busenkell to Saunders gave the Jags a 20-14 lead with 1:41 left. With 13 seconds left, Quakertown quarterback Will Steich, who would pass for 302 yards, found Tyler Woodman with an 11-yard touchdown pass, Riley Gaj adding the PAT for a one-point lead.

On the ensuing possession, the Jags fumbled a lateral, the Panthers recovering at the Garnet Valley 23. As time expired, Gaj hit a 33-yard field goal.

“We knew Quakertown was a great team coming in,” GV coach Mike Ricci said. “They execute their offense. We knew they were going to be able to come in and run the ball, and they did that. I loved the way we responded, though.”

The response, however, was not immediate, as Quakertown recovered an on-side kick at the Garnet Valley 38 to begin the second half and threaten to inflate a lead. But Garnet Valley held on downs, then took control.

With 9:53 left in the third, Reynolds gave the Jags the lead with a 65-yard touchdown run. Andrew Jackalous ended the next Quakertown possession with the first of his two interceptions, leading to a one-yard Reynolds scoring burst.

By the time Joseph Checchio scored on a 19-yard run and Joey Halloran corralled a two-point conversion pass from Busenkell, Garnet Valley’s depth of potential scorers had Quakertown stumped.

“It’s great,” said Busenkell, who completed seven of his eight passes for 192 yards. “I can name all our options … Gal (Sean Gallagher), Halloran, Shane, Ndozi (Okolo), (Luke) Lassik. If one man goes down, the next one comes up. We all trust each other an enormous amount.”

Zach Fondl scored on a 19-yard toss from Steich to draw the Panthers close early in the fourth, but Halloran’s TD reception and ensuring conversion catch put Garnet Valley ahead, 50-31. Panther John Eatherton completed his 155-yard receiving night with a 52-yard scoring catch, but Reynolds answered with a 43-yard blast to prevent any late stumble.

“It was 24-20 at half, and even in the fourth quarter we were down 11,” Banas said. “I thought we were driving. But a couple little things here and there were the difference.”

The Jags never punted and were stopped only when they lost a fumble and were intercepted. For that, they will advance to the district championship game against visiting Coatesville.

“We like to stick to business while we are on the field,” Busenkell said, smiling. “But when we get in the end zone, we like to get together and say, ‘Let’s do it again.'”