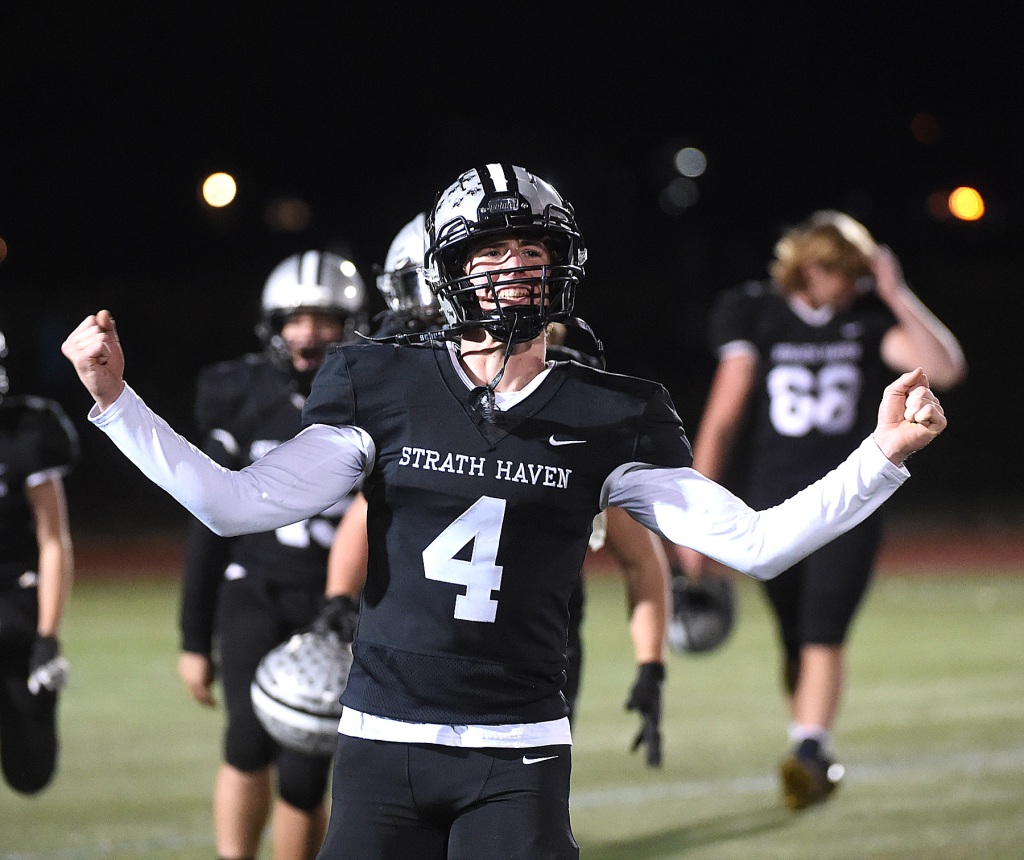 NETHER PROVIDENCE — Sam Milligan encapsulated what it means to be a Strath Haven football player with one inordinate play from a quarterback.

It had nothing to do with the junior’s ability to throw or run the ball.

Milligan, who wears many hats for the Panthers,  became the lead blocker on running back Matt Shuler’s 24-yard touchdown run in the second quarter Friday night. Milligan handed the ball to Shuler and started looking for someone to hit. He engaged with Academy Park’s Eric Willis, one of the top defensive backs and all-around players in Delco, and blocked the Knights senior from getting anywhere near Shuler.

As Shuler crossed the goal line Milligan drove Willis into the turf. The score put Haven ahead to stay and it was the turning point that put the No. 2 Panthers in complete control of their District 1 Class 5A semifinal bout with the sixth-seeded Knights. Haven dominated the second half and rolled to a 34-6 win.

“That felt great,” Milligan said. “Our O-linemen do it every day, our running backs do it every day, so it’s nice to be able to get in on that, too. Their whole team was fast, just a bunch of great athletes. I know that Matt’s behind me and he’s going to get in regardless of what I do. It makes it a little bit less stressful for him.”

Shuler amassed a game-high 107 yards on the ground with two touchdowns. He was not surprised to see Milligan taking matters into his own hands on his first scoring run.

Strath Haven running back Matt Shuler celebrates after the Panthers wrapped up a 34-6 victory over Academy Park in a District 1 Class 5A semifinal Friday night.

Milligan also shined defensively in the secondary, covering AP’s fleet-footed wide receivers. Oh, and he had a 47-yard punt and was the holder on extra points.

“That’s all attitude and hustle right there,” senior running back Chase Barlow said of Milligan’s key block. “I love having him on my team. He did that for me against Radnor a couple weeks ago and it was the best play of the game. Personally, those are my favorite types of plays and to see him doing that is great. He’s a quarterback, hustling all the way downfield. He’s got a lot of heart and determination.”

The Panthers will play for a district championship for the first time since 2010 next week when they travel to No. 1 West Chester Rustin, which defeated fifth-seeded Plymouth Whitemarsh, 19-14.

Haven overpowered an athletic Knights defense and stuck to what had worked under coach Kevin Clancy for decades. Put simply, the Knights had no answer for the Wing-T offense, with Shuler, Barlow and Anthony Crawford picking up yards in chunks. The top-ranked run offense in Delco averaged 7.9 yards per carry.

“Our whole coaching staff has won state championships here, so they all know what it takes and it isn’t anything new to them,” said Milligan, who completed his only two passes for 43 yards and ran for 49 yards on six carries. “It’s nice to play for so many guys who know what they’re doing. From the start it was do your work every day, do the same thing every day and you’ll come out on top.”

AP had success running the ball early on. Terrence Oliver carried the ball 15 times for 97 yards and scored the Knights’ lone touchdown. He had an 88-yard touchdown run erased on a holding call in the first quarter.

The Knights fumbled the opening kickoff, a short line drive by Charlie Shankweiler that was recovered by the Panthers. AP eventually forced a turnover on downs inside its 10-yard line, but Haven responded on its next possession. After a long scramble by Milligan, Barlow rumbled straight ahead across the goal line from four yards out to put the Panthers ahead 7-0.

“I think we had to just run straight because they’re so fast,” said Barlow, who ran for 67 yards on 13 carries. “There were two times I tried to get the edge and I wasn’t able to. So, I think it was important that we stayed on them going up the middle.”

The backbreaker came on Haven’s first drive of the second half. AP tried an onside kick that skittered out of bounds. Barlow capped a nine-play, 46-yard drive with a two-yard TD run to give the Panthers a 14-point advantage.

On the ensuing drive Academy Park tried a fake punt run on fourth down, but ended up losing two yards. This set the Panthers up with a short field. Two plays later, Milligan went on a bootleg and connected with Crawford for a 29-yard touchdown pass

Shuler capped the scoring with his second TD run in the fourth quarter. Aiden Sutherland put the exclamation mark on Haven’s win with an interception of Darrell Fields late in regulation.