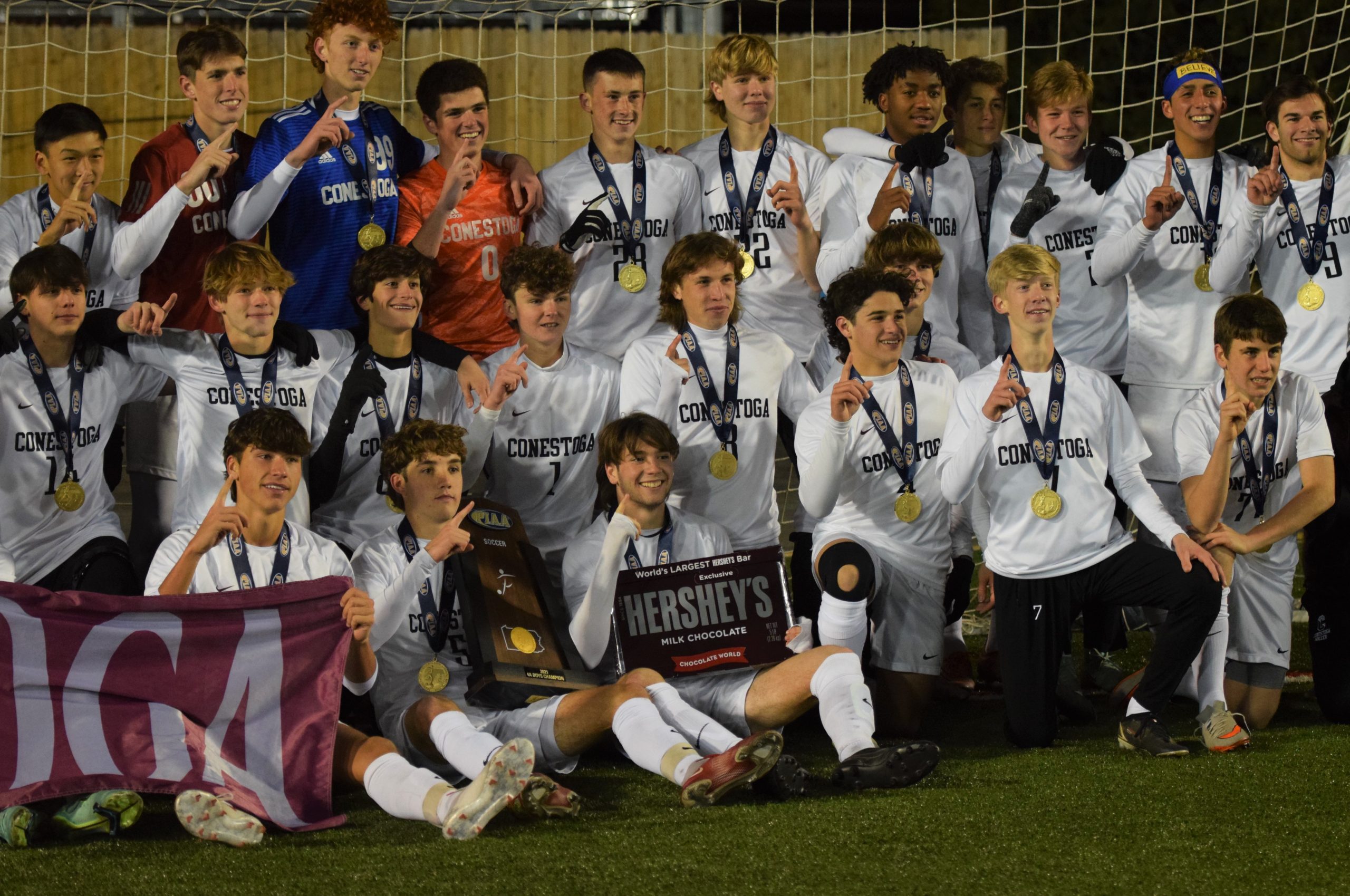 Conestoga players celebrate with the PIAA championship trophy after winning the 4A final over Seneca Valley 1-0 Friday in Hershey. (Austin Hertzog - MediaNews Group)

HERSHEY >> Perfection is a constant pursuit on the soccer pitch, but, of course, it’s never fully realized. The Conestoga boys, however, came awfully darn close in 2021.

The Pioneers put the finishing touches on a perfect 26-0 campaign on Friday evening with a 1-0 victory over Seneca Valley to capture the PIAA Class 4A Championship. It is the program’s fifth state crown, and fourth in the past decade, dating back to 2011’s 3A title.

’Stoga also reigned over the state’s 4A class in 2016 and 2017, and they’ve all come under head coach Zimmerman, who wrapped up his 20th season at the helm.

“This is (Conestoga’s) first team to go completely undefeated with no ties, to win a Central League title, and a district title and now a state championship,” Zimmerman pointed out. “I talk to the team about the idea of us having a backpack, and during the season you put stuff into the backpack as we go along.

“Well, now everything is in that backpack.”

Conestoga players celebrate at the final whistle after winning the PIAA 4A championship Friday in Hershey. (Austin Hertzog – MNG)

In a battle of unbeatens at Hersheypark Stadium, Conestoga did what it’s done all season: clamp down defensively and then strike with depth and skill. It culminated with an unblemished season, and ended with a gleaming team trophy and shiny individual medals.

“This was my dream – it’s the dream of all of the guys on this team,” said senior star Simeon Dorsey.

“It’s unreal,” added senior forward Jayce Tharnish, who scored the game’s lone goal. “We have a ton of talent all around the field. But maybe the biggest difference is our coaches. They know what they are doing. Coach Z (Zimmerman) knows exactly what he is doing.”

Along the way, this ’Stoga squad amassed some staggering accomplishments. And this may be the most impressive: stringing together eight straight shutouts from the start of the postseason to the glorious finish. That’s right, the Pioneers outscored their playoff opponents 21-0 this month.

“Our defense is the best part of our team. They are so solid,” said senior midfielder Sebastian Tis, the team’s leading scorer.

“Defense has been our number one priority this season,” echoed Dorsey. “The saying ‘defense wins championships’ is perfect for our team. It definitely is true.”

In all, Conestoga registered 21 shutouts this season, and allowed a total of five opposing goals. For a bit of perspective, the last team to score a goal against the Pioneers was 34 days earlier, in mid-October, by Great Valley.

“To only allow five total goals in 26 games is certainly among the best ever in the state,” Zimmerman said.

“And at 26-0, no team can do better than this team. The only thing that anyone could ever do is equal this accomplishment.”

Conestoga players run toward the fans after Jayce Tharnish (21) scored a goal against Seneca Valley during the PIAA 4A championship Friday in Hershey. (Austin Hertzog – MediaNews Group)

The program also has a mighty impressive win streak going. The last time Conestoga suffered a defeat was over two years ago, in the 2019 PIAA Quarterfinals against North Penn. The Pioneers went unbeaten in 2020, but due to COVID restrictions, the Central League opted out of the postseason. And that was a major motivational factor this season.

“We kind of felt we were cheated out this this last year. That’s why it means so much to us,” Dorsey said.

“We didn’t even qualify for the playoffs last year, despite being undefeated, so this season was trying to make up for things that had happened in the past,” Zimmerman added.

To ultimately cap it off, ’Stoga had to outlast a Seneca Valley squad that won the District 7 championship for the third time in four years and entered the day with a 21-0-1 record. The Raiders also notched 15 shutout this season, so it was no surprise that it was a low scoring affair.

“Seneca Valley is the best team, by far, that I’ve played in my high school career,” Tis said. “The way they moved the ball was like a professional team.”

Scoreless in the first half, Conestoga wasted no time, scoring just 100 minutes into the second half. It came on the team’s first corner kick of the match, from Brady Costin’s foot to Tharnish’s head and into the net.

“Brady has a very solid and consistent corner kick,” said Tharnish, who has committed to playing Division I college baseball at St. Bonaventure. “I made a run at the near post, jumped up and the ball was there.”

Neither side had a prime scoring chance in the final 38:20, but the Raiders did test the Pioneers star-studded backline. Senior goaltender Charlie Smith wound up with six saves.

“Statistically, this was our best defensive team,” Zimmerman acknowledged. “We did not give up a goal in the playoffs, against many of the best teams the state.

“And being undefeated puts a lot of pressure on a team, and it presents higher expectations. The reality is that this result is the only one that most people would be happy with. It’s weird to think.”

Conestoga finished with a 11-6 edge in shots on goal, and two of the game’s best chances came in the final 13 minutes of the first half. The first saw Tis weaving in and out of defenders to get off a shot from inside of 10 yards, but Seneca Valley keeper Ryan Krumenacker made a tough kick-save. The other was in the final minute, when Tharnish was stymied from close range.

“This whole season’s been kind of crazy,” Tis said. “But it’s also a little sad because the seniors are going and this is the last time we are all playing together.”

When all of the cheering subsided and the players began walking off the field to the locker room, Zimmerman admitted that in the days and weeks to come, he will be pinching himself, trying to come to grips with an eventful 2021 season.

“It takes some time to fully realize it all and let it soak in. It’s like flowing down a river and then suddenly you wash ashore,” he said.

“Every time to get here to Hershey, you always wonder if you will ever get back here. So for this trip to end this way, it’s a blessing and we are very fortunate.”

Conestoga’s Sebastian Tis and Lorenzo Vargas-Clarke reach for their family and friends after winning the PIAA 4A championship over Seneca Valley Friday in Hershey. (Austin Hertzog – MediaNews Group)