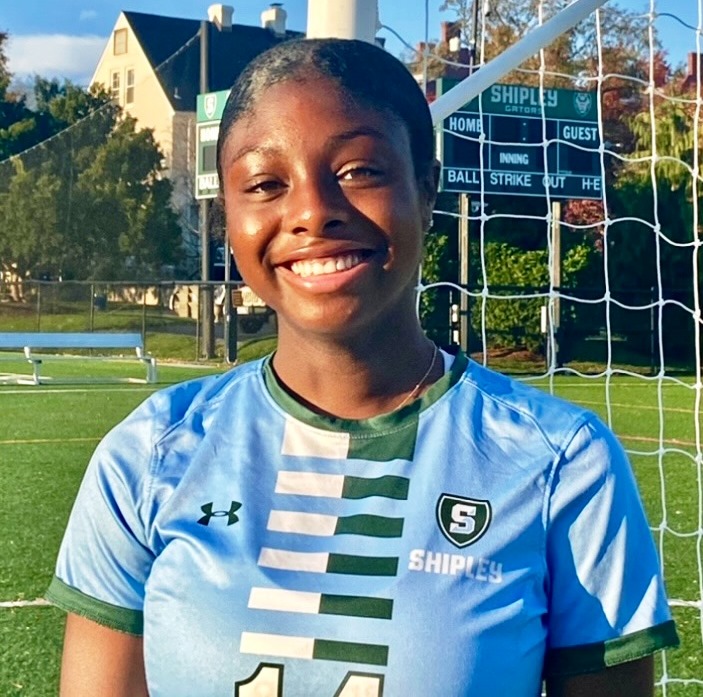 The senior center midfielder and captain, a first team All-Friends Schools League selection, was a key factor in the Shipley girls’ soccer team recently capturing the PAISAA Commonwealth Cup. She was an all-around performer for the Gators this fall, a potent offensive player as well as a strong defender. Shipley head coach Nikki Wiseman noted, “She was the hardest worker on our team – a great leader and team player.” A fine all-around athlete, Griffin also plays lacrosse (defense/midfield) for Shipley in the spring.

Shipley’s Jaiden Griffin (left) was a key factor in the Gators winning the Commonwealth Cup.

Q: What is your sharpest memory of the PAISAA Commonwealth Cup championship final against GA, which came down to penalty kicks (one of which you converted) after double overtime?

A: My sharpest memory was the team’s mindset going into overtime. Everyone was extremely nervous, including me, but we all stepped up to the plate. I had to reassure them that I had confidence in each of them. I stated that it was important to find a corner when shooting and they each proved that they could stay composed and finish.

Q: How do you see your on-the-field leadership role for Shipley as a central-mid and as a team captain?

A: As a center-mid, my role is to distribute the ball and maintain possession. I am always looking to progress the ball up the field to create as many scoring opportunities as possible. As a captain, my role is to set the tone for the game. I know that my teammates look to me to bring the energy and keep the intensity high. Most importantly, my role is to communicate, whether that’s calling for the ball or giving directions to the person with the ball.

A: The strongest aspect of my game is my ability to connect passes and generate offense. I am currently working on my finishing.

A: My biggest soccer mentors have been most of my club coaches in Delaware; specifically Roberto Gimenez. He taught me the importance of playing that center-mid role and got me to be more comfortable with the ball at my feet.

A: Pre-game prep normally consists of snacks (fruit or a protein bar), a prayer, and music to get me pumped for the game.

Q: You wear uniform jersey No. 14 for Shipley – why did you pick this number?

A: I came to Shipley two weeks into the season, so I was given the only number no one else had, No. 14. I stuck to this number because not many people go for it, compared to other numbers which makes it unique.

Q: What is your favorite academic subject at Shipley? What would you like to major in at college? Is there a career field that particularly interests you at the present time?

A: My favorite academic subject is Comparative Anatomy and Neuroscience. I would like to major in Biology on a Pre-PA track with intention of becoming a Physician Assistant.

Favorite book: The Hate You Give, by Angie Thomas.

Family members: “I am the middle child with two siblings. My oldest sister is currently a nanny with intentions to be in sports media. My younger brother is currently attending the YSC Sports school and plays on the Philadelphia Union U14 team. My mother works with a non-profit soccer organization and my father works at an urgent care center and CHOP.”