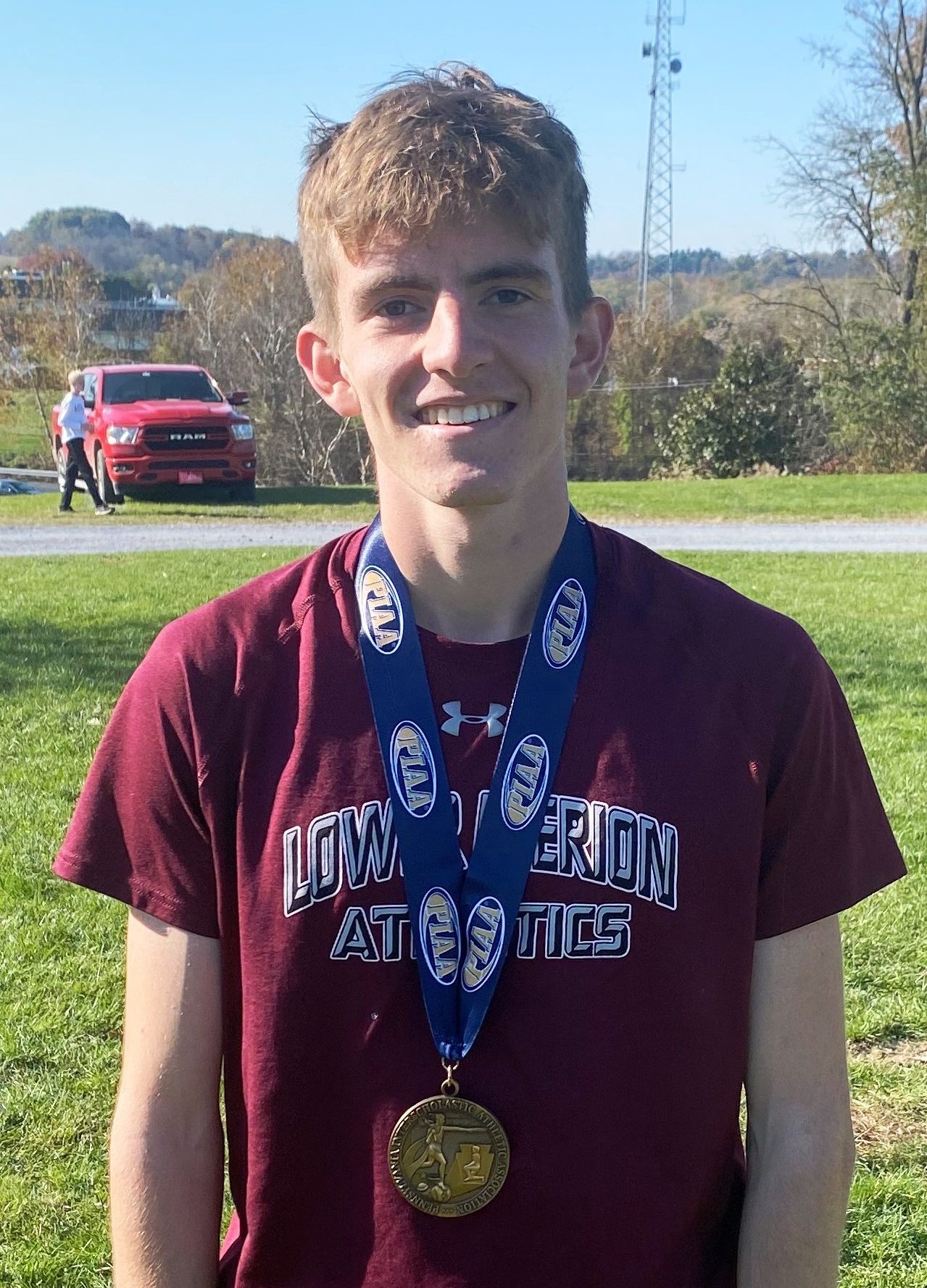 The senior captain was voted Most Valuable Runner of a Lower Merion boys’ cross country team that captured the PIAA District 1 3A team championship this fall. He was medalist at the PIAA District 1 3A individual championships (13th), PIAA 3A state championships (23rd), Paul Short Invitational (13th) and Central League Championships (4th). “Alex has been one of our hardest workers, and one of his gifts is remaining calm in high pressure races and being able to pace himself and measure his energy expenditure,” said Lower Merion boys cross country coach David Van Houten. “The State Championship race is a great example. Alex was 107th at the mile mark and finished 23rd. He quietly worked his way through the field and led his team to its best finish ever at States.”

Q: What do you think has been your best race this fall, and what was the key to your performance that day?

A: I think my best race this season was at the Paul Short Invitational. It was sort of a breakthrough meet for me, being the first time running under 16 minutes. I think the key to success for me at Paul Short and really all the meets for the rest of the season was just having the right mindset. I went into every race believing I would run fast and prepared myself to push through the pain later in the race.

Q: What is your favorite memory of Districts? How did you see your leadership role on this year’s team as a captain?

A: My favorite memory of Districts was just after we found out our team won. We were all running around, throwing water, and tackling each other, and our coaches Dvh [David Van Houten] and Neal [Berman] were happy. It was nice to see everyone enjoying the results of our hard work throughout the season. I’m not as outspoken as the other captains on our team, but I’d like to think I lead by example for the younger guys and show them the improvements possible with consistent training.

Q: What sparked your original interest in cross country? Who have been your most influential cross country coaches/mentors, and what was the most important thing you learned from each of them?

A: I was originally a swimmer, but I started cross country in middle school because it was similar to swimming and it was the only sport I could do as a sixth grader. Coach Ozeni, my middle school coach, was the person that got me interested in running and gave me the self-confidence to compete with faster runners. My high school coaches, Dvh and Neal, taught me about the time and dedication needed to be successful as a runner. I’ve been lucky to have amazing coaches in both middle and high school, and I really can’t thank them enough for being all around supportive and encouraging.

A: My favorite brand of running shoe is Brooks. I have flat feet, and I think Brooks do the best at preventing me from getting injuries and feeling fast at the same time. As a bonus, they have some unique colors. My shoes right now are neon yellow.

A: My favorite local place to run is the Wissahickon Trail – it has a bunch of cool paths you can run on that keep longer runs interesting. One of the more unique trails takes you on these huge pipes that you can run across.

Q: Tell us a little about your current cross country practice regimen. What aspect of your running are you working on most recently?

A: I typically run around 55 miles a week when we aren’t racing. I have a long run on Monday, workout on Wednesday and Saturday, and then recovery runs on every other day of the week. I’ve been trying to be more smooth and efficient when I run. I mainly focus on this during long runs or tempo workouts when I can test the limits of how long and how fast I can run while feeling good.

A: I don’t really do too much pre-race prep other than the warm up we do every day before running, but I try to stay relaxed and fight off any pre-race nerves. I also always make a sunflower seed butter and jelly sandwich (I’m allergic to peanuts) which I usually don’t eat. It’s kind of a superstition/good luck charm that my family and I joke about.

Q: Do you participate in any other extracurricular activities at Lower Merion other than cross country?

A: I compete in winter and spring track, and I’m a member of the school’s computer science club.

Q: What is your favorite academic subject at Lower Merion? What do you think you would like to major in at college? Is there a career field that particularly interests you at the present time?

A: My favorite subject at Lower Merion is computer science and I think that’s what I want to major in as well. As of now, I don’t have a specific career that interests me, but I would like to do something math or computer science related in the future.

Favorite pre-race meal: “Any kind of pasta (the night before).”

Person I most admire, and why: “My mom, she’s the person that keeps our whole house functioning because me, my dad, and my brother can be a mess.”

(To be selected as Main Line Boys Athlete of the Week, a student-athlete must first be nominated by his school.)