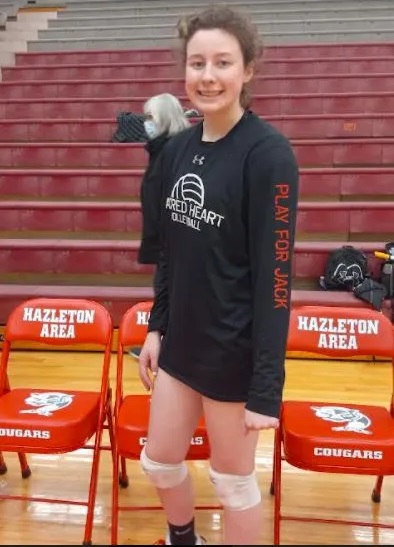 HAZLETON — Officially, Liz Cuskey had four kills, three aces and one block in Sacred Heart’s historic 3-0 victory over Canton in the semifinals of the PIAA Class A volleyball tournament at Hazelton Area High School Tuesday night.

Those numbers, though, don’t tell how important the junior middle hitter was in bringing the Lions to the school’s first PIAA final in any sport.

“It’s such a tone setter to have someone like that,” Sacred Heart coach Sam Moyerman said. “I think whenever we can get her going early, it just changes everything for the rest of the game. The other team has to totally commit to what’s she’s going to do.”

Although Cuskey only had the one block for a point, she got her hands on enough shots to alter Canton’s attack to send the Lions (19-7) into Saturday’s Class A championship game against unbeaten District 9 champion Clarion Area, the defending state champion that swept District 7’s Bishop Canevin, 3-0, Tuesday. The final at Cumberland Valley High School in Mechanicsburg starts at 10:30 a.m.

“I was just trying to go up right away,” Cuskey said. “I was trying to help out my team as much as possible, especially since we weren’t double blocking the middle.”

While Cuskey did everything for her teammates, she also had someone else on her mind.

“My dad (Jack) passed away in July 2020,” Cuskey said. “He told Sam that I would help win us a state championship so I’m just playing for him.”

All the Lions are. Each player has “Play for Jack” printed on the left sleeve of their warmup jersey’s.

“We’re playing in his honor,” said junior outside hitter Emily McKenna, who led the attack with 10 kills plus an ace and a block. “It’s sentimental and inspirational for us.”

The spark came early as the Lions dispatched the Warriors (17-4) in an hour, about half the time it took for the team to make the ride to Hazleton. Sacred Heart won 25-18, 25-18, 25-8, to become just the second Delco team to reach a state volleyball final. Garnet Valley won the Class 4A title in 2016.

Once again, Sacred Heart’s service game gave it an edge. Setter Annie Corcoran rattled off five straight points in the first set to turn a 9-8 deficit into a 13-9 lead. Cuskey finished it off with three straight points at the service line, including two of her three aces.

“We practice serving all the time,” said Corcoran, who set the offense in motion with 20 assists. “Sam tells us that aces are super important points because it gets in the other team’s head that we have strong serves, strong swings and that we’re just a good team.”

Sacred Heart’s work from the service line turned the tide in the second set, too. Down 8-7, junior Ally Albanese ran off four straight points with the help of a pair of kills from McKenna to put the Lions up for good.

“The girls have been on fire from the service line,” Moyerman said. “They’ve been really, really good at picking their spots and knowing where to go and keeping them in (play), too. We’re not trying to destroy the ball.”

Albanese made sure there would be no comeback from the Warriors in the third set. She started a seven-point service run to give the Lions a 9-1 lead. It was as close as Canton would get. Macie Moresco had a pair of aces in a four-point run that stretched the lead to 23-7, and a serve-receive error by the Warriors finished it off.

Libero Bella O’Toole, the only senior on the team, gave the Lions a little talk before the final set to keep them focused.

“Bella told us right that sometimes we get a little shaky in the third set but we’re not going to do it today,” Corcoran said. “We’re going to go out there and finish it and that’s what we did.”