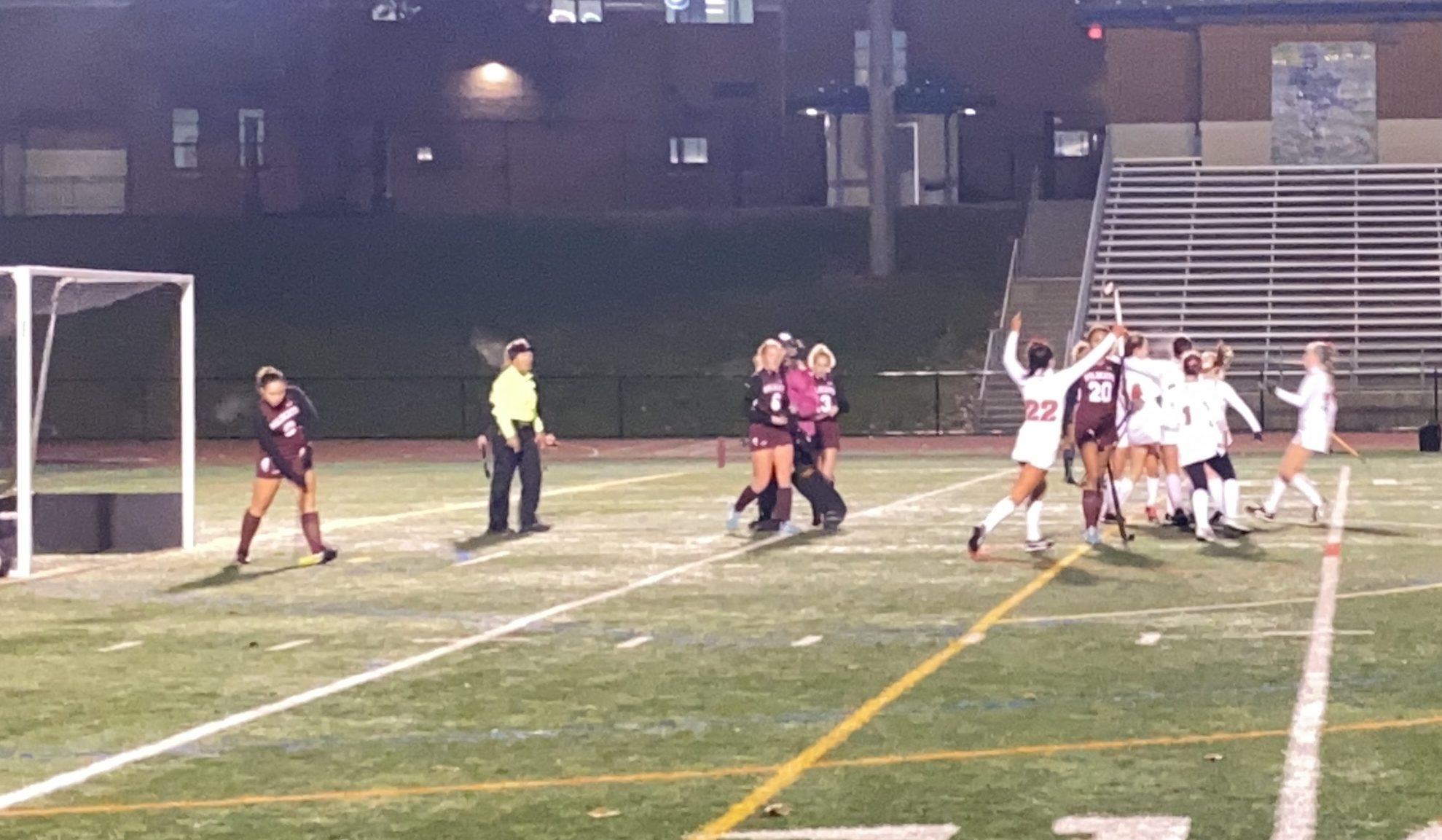 EXETER TWP. >> It seemed for a while that Gwynedd Mercy field hockey’s brilliant season would end in frustration on a cold Tuesday night at Exeter Township’s Don Thomas Stadium.

The Monarchs dominated play for much of their PIAA Class 2A semifinal against Mechanicsburg but it was the District 3 runner-up Wildcats holding onto a 1-0 lead after scoring in the second quarter off a penalty corner.

“I think we just kept talking to each other and saying don’t let it get to us, we know we can score,” GMA senior Alaina McVeigh said. “And I’m proud of us, we never let up even though we were down one.”

It took Audrey Beck’s all-out effort for Gwynedd Mercy to finally convert on an opportunity and pull even, the junior ending up on the ground but finding a way to put the ball into the cage at 6:36 in the third.

“A girl tackled me, I tripped over the goalie,” Beck said. “But I don’t know how but it went in.”

McVeigh then came through in the fourth, scoring on a reverse shot with 6:11 remaining and Gwynedd Mercy held on to secure a spot in the state final with a 2-1 comeback victory.

“I’m just really proud of them and I’m really happy for them,” Monarchs coach Allyson Fuller said. “All of the work that they’ve put in turned into something. A lot of teams put a lot of hard work in but for them, they were able to capitalize and believe in themselves and get to the state finals, that’s something so amazing and I’m just happy to be a part of it.”

“Oh my God, something I’ve personally never felt before,” said Beck of making the final. “I think this team deserve[s] it more than any other team out there. We’ve grown so much from preseason to now – we really just came together in these district games.”

The Monarchs (20-2-1) are now unbeaten in the last 18 games, having gone 17-0-1 with the lone tie coming to Villa Maria Oct. 7. GMA beat VMA 3-1 in the District 1 final and in states has bested a trio of District 3 sides – Susquehannock in the first round, defending champ Palmyra in the quarters and Mechanicsburg (17-7-0) Tuesday.

A win over the District 3 champ would give Gwynedd Mercy its first-ever PIAA title – the Monarchs squad in ’96 falling to Lake-Lehman in the Class 2A final at Villanova. Twin Valley is trying for its second state crown, having won 2A in 2015.

“I think the past couple games we’ve been on a really good confidence spell,” said Fuller, in her second season with GMA. “Each victory and also each play that we make, it just brings up our own belief that much so just everybody just clicked and everybody was really on and the energy was good.”

Gwynedd Mercy’s pressure kept most of the contest in Mechanicsburg’s half of the field but until Beck’s tally the Monarchs (20-2-1) could not crack a tough Wildcat defense that was adept at not giving up corners – GMA earning just one in the first half.

“They had really good low block tackles so we said start lifting the ball, start getting it in faster, start shooting faster before they get to us,” said McVeigh, a Duke commit. “And I think by the second half that’s kind of the transition that we made. We were hitting balls in, trying to get tips or just shooting faster in general and we got a lot more shots off you could see.”

Mechanicsburg, meanwhile, grabbed a 1-0 advantage early in the second quarter on the second of consecutive corners – Cam Standish scoring at 11:30 off an assist from Sydney Aylward.

“We focus on every team has talented players and Mechanicsburg is such a good team, so they’re going to get on the board,” Fuller said. “You can’t shut a team like that out so we just know we kept staying to our pressure and our game plan and the shots are going to start to land for us.”

Pinning the Wildcats in their own end finally paid off for Gwynedd Mercy in the third as Caroline Fitzgerald intercepted a clearance attempt then delivered a ball into the circle. Mechanicsburg goalie Emily Kraber kicked it in a crowd but the ball was collected by Beck, who then put a shot in at 6:36.

“Complete stomach and then hit it,” said Beck, who has verbally committed to Old Dominion for lacrosse. “I don’t know how but I know that this team plays for each other, we work as a team, we win as a team and I think we always do this in the remembrance of  Zo [Zoë Rogers].”

Rogers, a 2019 GMA grad and member of the field hockey team, was a Monarchs coach when she died in October 2020. Before her insertion passes on corners, Beck blessed herself and pointed to the sky to honor Rogers.

“I at least play for her every day but I know this team loves her so much and then we just miss her,” Beck said. “But every corner goes out to Zo. “

For a moment Gwynedd Mercy thought it had taken the lead when Fitzgerald knocked in a rebound on a corner in the third’s final minute but the goal was waived off due to the ball not going outside the circle.

“We just kept pressuring, trying to step in front of their balls and we started working the ball around a lot faster,” McVeigh said. “And I’m so proud of people like Audrey and Sydney [Mandato], they were pressing and they were making their defenders make mistakes and that was working for us.”

McVeigh eventually provided the go-ahead score with 6:11 left in the contest, making a run down the end line from the right side, cutting into a pocket of space and sailing a reverse shot into the cage.

“I just kind of made a move around a girl and I saw I had the open space so I knew I just had to shoot it,” McVeigh said. “I knew I had it.”

Pushing for an equalizer, Mechanicsburg drew two straight penalty corners. On the second, the Wildcats’ Anne Sweeney lofted a shot from the top of the circle but GMA goalie Lilly Sweeney hit it out of the air to send it out over the end line.

“It was fantastic, it was a great save cause they were really trying to throw us off,” Fuller said. “They’re like all right we’re going to do the drag flick, they probably haven’t seen us do this yet and she was ready for it.”

Mechanicsburg went up 1-0 at 11:30 in the second quarter on the second of back-to-back corners. With GMA down a defender due to leaving early before the prior penalty corner, Aylward passed to Standish on the right side of the circle and Standish unleashed a shot into the cage.

In the third before Beck made it 1-1, McVeigh had a chance on a corner, blasting a shot from the circle’s left side that hit outside the near post.