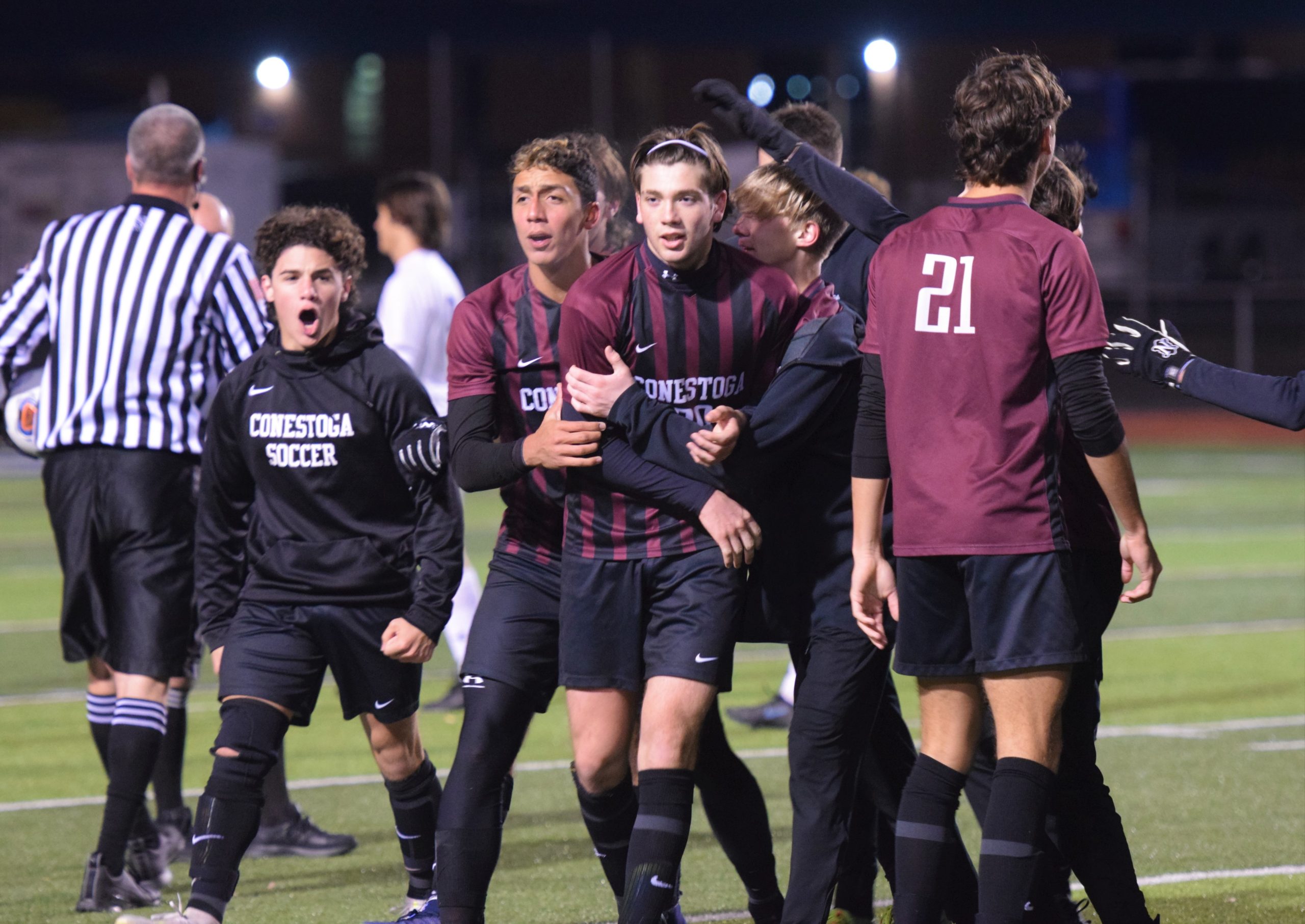 ROYERSFORD >> It just simply didn’t translate from the tape.

In preparing for the PIAA Class 4A semifinals against District 1 champion Conestoga, La Salle’s soccer team watched plenty of tape on the Pioneers. Sure, ‘Stoga’s speed, size, skill and wealth of weapons jumped off the screen but actually seeing it in person was an entirely different story.

The Conestoga buzzsaw kept churning as the Pioneers knocked off the PCL champion Explorers 3-0 on Tuesday at Spring-Ford to advance to Friday’s state title game.

“It means the world to us, we’ve worked every single day for this,” Pioneers senior Sebastian Tis said. “Ever since we were here two years ago, losing to North Penn, our goal has been to come back and get to Hershey.”

Conestoga didn’t get the chance last year, with the Central League not taking part in the COVID-19 altered district and state playoffs, so for the team’s seniors, it has been two long years of waiting. That 2019 North Penn team was also a juggernaut, taking down La Salle a round after outing the Pioneers on its way to a state title and the Explorers had a similar sense leaving the field Tuesday.

As much as they tried, there just simply wasn’t a way to replicate what Conestoga could do. From the absolute weapon that is senior defender Lorenzo Vargas-Clarke’s long throw in to the size, physicality and speed the Pioneers play with, it didn’t take long for La Salle to find itself in an unusual position as the team pinned back on the defensive.

“The team speed doesn’t come across on film like it did on the pitch today,” La Salle coach Tom McCaffery said. “It was ridiculous. That was something where we didn’t get our feet moving early enough in the match and seemed like we were three steps behind, chasing shadows the whole first half.

“We gave a push the start of the second half, the guys gave a good effort to try and get it to 2-1 but we didn’t get anywhere close to putting one behind the goalie, then that third goal hurts and kind of breaks you a little bit.”

Conestoga’s Sebastian Tis watches from the ground as his shot trickles over the goal line for the Pioneers’ first goal against La Salle during a PIAA 4A semifinal Tuesday night at Spring-Ford. (Austin Hertzog – MediaNews Group)

The loss ends La Salle’s season in the final four for the second time in three years and brings about a goodbye for a senior class that won two PCL titles (the league tournament wasn’t contested in 2020), three straight District 12 titles and made three state tournaments. Those three consecutive district titles are a first in school history.

Explorers senior Sean Jennings, the Catholic League’s MVP, had no regrets about the team’s season even if it did end a win short of Hershey and was plenty satisfied with what he and his teammates did in their time with the program. Jennings was one of 15 seniors this year who helped raise the benchmark for the Explorers going forward.

A future Penn Quaker, Jennings echoed his coach in saying defending the Pioneers in person was much different than trying to infer it from game film.

“First off, that kid’s throw is crazy, it’s like they get a corner as soon as they cross midfield,” Jennings said. “They’re all good players, they move the ball well, they’re big, they’re fast, just a good team.

“We talked about it, watched some film on that throw but obviously seeing it live is different, it definitely comes at you fast.”

Between Vargas-Clarke’s repeated heaves into the box and some actual corner kicks, the Pioneers were able to pin La Salle into their defensive third for a long stretch of the first half. The Conestoga senior defender said his team’s ability to keep an opponent locked helps wear them down over the long haul.

La Salle goalkeeper Ryan Kalup punches the ball on a long Conestoga throw-in during the first half of a PIAA 4A semifinal Tuesday at Spring-Ford. (Austin Hertzog – MediaNews Group)

It also helps when the Pioneers can just apply pressure on their own and make things happen. That’s just what Tis did as the game approached the final 10 minutes of the first half. The senior, who had been moved up to striker, saw an opportune moment to pounce on a heavy touch in the back, dis-possessing La Salle’s keeper and knocking the ball in for the match’s first tally.

“My coach told me to go to striker and said he wanted a goal out of me,” Tis said. “I knew I should step and press so when the keeper took that touch, I went for it and got my foot in there.”

The goal came out of nothing, but was just the spark Conestoga needed.

“It was the best thing that could have possibly happened for us,” Vargas-Clarke said. “It was out of nowhere, nothing seemed to be going on and then suddenly everything’s in our favor.”

Three minutes later, a long throw helped the Pioneers double their lead. Vargas-Clarke threw one off the left touchline to the far post, where the initial header was pinged off the crossbar and took a fortunate carom right to Simeon Dorsey, who headed the second chance home.

“A 2-0 score is the deadliest score in soccer, so we knew we had to come out in the second half and get that third goal,” Tis said.

It would be Tis and Vargas-Clarke playing their secret weapon that led to that third goal. After 40-plus minutes of dealing with throws being sent into the 18-yard box over and over again, opponents tend to start looking a different way when they see the Pioneers get a throw-in.

When that happens, Vargas-Clarke switches it up.  He switches it up and goes short to Tis, who in this case slipped a defender then launched an absolute rocket off his foot and caught everyone by surprise for the 3-0 lead with 28:43 to play.

“We have a connection, whenever he does the long throw-ins over and over again, teams start to turn their backs,” Tis said. “I step to him, he throws me the ball and I take a shot. It’s worked like three times for us so far.”

The senior laughed when it was likened to someone driving an F1 car 30 miles per hour.

“I’m so used to throwing it far that throwing it short is almost difficult,” Vargas-Clark said. “I throw it pretty badly to him because it’s so weird.”

La Salle will have a lot of roles to fill next year, but McCaffery felt optimistic the returning players will let Tuesday’s result be the start of their motivation to keep the standard high. For the 2021 class, they could leave the field knowing they helped raise the level of La Salle soccer.

“We left our mark, I think,” Jennings said. “We had a great run and it’s a credit to all the boys.”

“It’s up to the younger guys and how much work they want to put into keeping this standard up and running,” McCaffery said. “When you’re senior-heavy, the expectation is you’re going to be good. Playing with that expectation is hard but these guys did a wonderful job of carrying that standard and playing at a high level.”

Conestoga will face Seneca Valley, the defending PIAA champion, at HersheyPark Stadium on Friday night right after the Pioneers girls play in their own state final.

“We’re going to stick to our plan, we’re not frightened by anyone else, so we’re going to do what we do and do it to the best of our ability,” Vargas-Clarke said. “We’ll be prepared.”

Conestoga’s Sebastian Tis looks to make a turn against the defense of La Salle’s James Barton during a PIAA 4A semifinal Tuesday night at Spring-Ford. (Austin Hertzog – MediaNews Group)