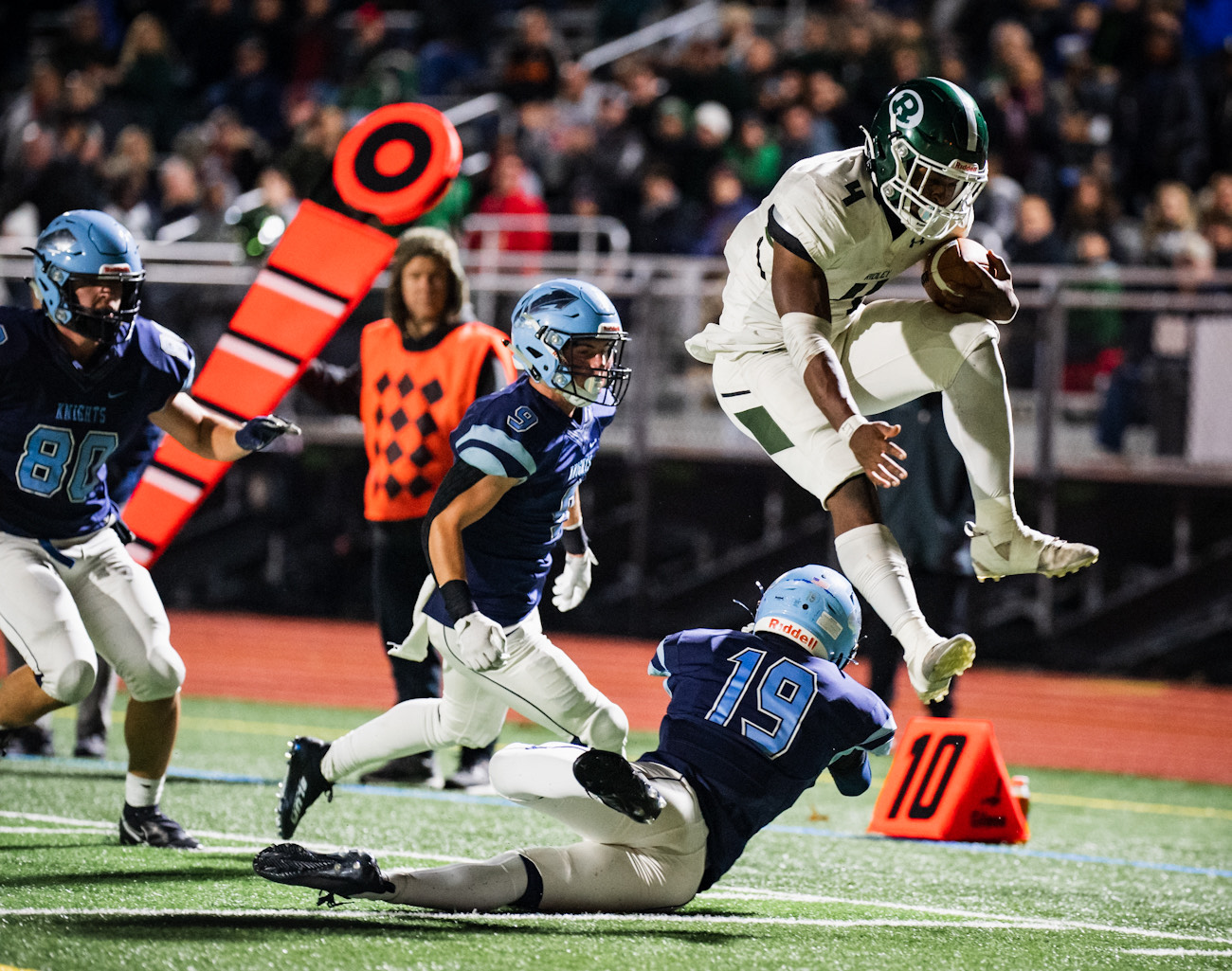 TOWAMENCIN — Classes would end by early afternoon, the equipment would be distributed soon after, the team bus would hum to life and the Ridley High football team would begin a 34-mile trip Friday to where it knows it always belongs.

By evening, the Green Raiders would be in a PIAA District 1 Class 6A round-of-eight playoff game against another classic program, North Penn.

If they were underdogs, that would not be unreasonable.

If they thought they were underdogs, that would be intolerable to the current curator of the Green Mystique.

So just after sunset on the eve of the game, under the Thursday Night Lights on a quiet Phil Marion Field, coach Dave Wood set the rules. No laughing on the bus. No smiling on the bus. No carrying on like they were all on a school trip to a museum. Earphones were acceptable, but concentration was mandatory.

That’s Ridley football he is charged with representing.

This, then, would be a business trip.

Ridley was the No. 7 seed in the tournament, North Penn the No. 2, but when Nick Volpone hit a PAT in overtime, the Green Raiders had a 56-55 victory that was as entertaining as any in their modern football history. Tahir Mills, his place in Ridley lore secure, scored five touchdowns, including a nine-yard burst to make it 55-55 in overtime, to help shove the Raiders into the Final Four.

“I have been involved in a lot of football games,” Wood said. “A lot. But nothing like this one.”

Ridley was winning in football long before the arrival of Wood, the former player at Penn Wood and head coach at Widener. That tradition was one reason – along with a more structured life with his family than typically might be enjoyed by a recruiter – he jumped off the college football train.

“A lot of my friends in college football are doing really well,” Wood said. “But in that business, guys move on. The one blessing I had in my 23 years in college coaching was that I never had to leave the Delco area. I was at Lehigh as a young coach, and commuted up there or lived there for a while. Then I was at Widener for years, then Penn.”

Wood enjoyed working on Al Bagnoli’s staff, but when the former Quakers coach took the job at Columbia, Wood hesitated.

“Penn was great, but I never wanted to be one of those college guys who had to make that transition every couple of years,” he said. “This job was open, and I called the administration. And this has been a great place.”

Ridley fans legendary for questioning every move of even the most successful of coaches, they initially found Wood’s multiple-option running attack to something less than their liking. But eventually, coinciding with the appointment of Mike Ewing as offensive coordinator, the Raiders made a full dedication to the passing game.

“He (Wood) used to coach in college, and he brought that down to high school,” Mills said. “The way he coached in college is working here. We are always prepared.”

Wood treats the Raiders as he might a college team, dedicating hours in the film room, publishing detailed scouting reports.

The Raiders were in character Friday, scoring with relative ease, bothering only once to punt.

“That running back was really good,” North Penn’s rather successful coach Dick Beck said. “They have a nice scheme. Their offensive line was very good too. And that quarterback was really poised out there.”

Given the instruction for the journey, there would be confidence, calm and execution, enough to drive the several hundred Ridley fans who made the trip into a frenzy. Their business taken care of, their spot in the next round secure, Wood would even permit his players a little levity on the return trip.

“There will be some smiles on the way home,” Wood said, breaking into one of his own. “But once we get back to that locker room, it will be all business and getting ready for next week.”

It’s mid-November and the Green Raiders are 11-1. Since they expect to be 12-1, they’ll keep following those rules.

Collins’ comeback showing sweet topping to Garnet Valley win over C.B. West
Informed they had to fight, Strath Haven turns up the heat on Marple Newtown