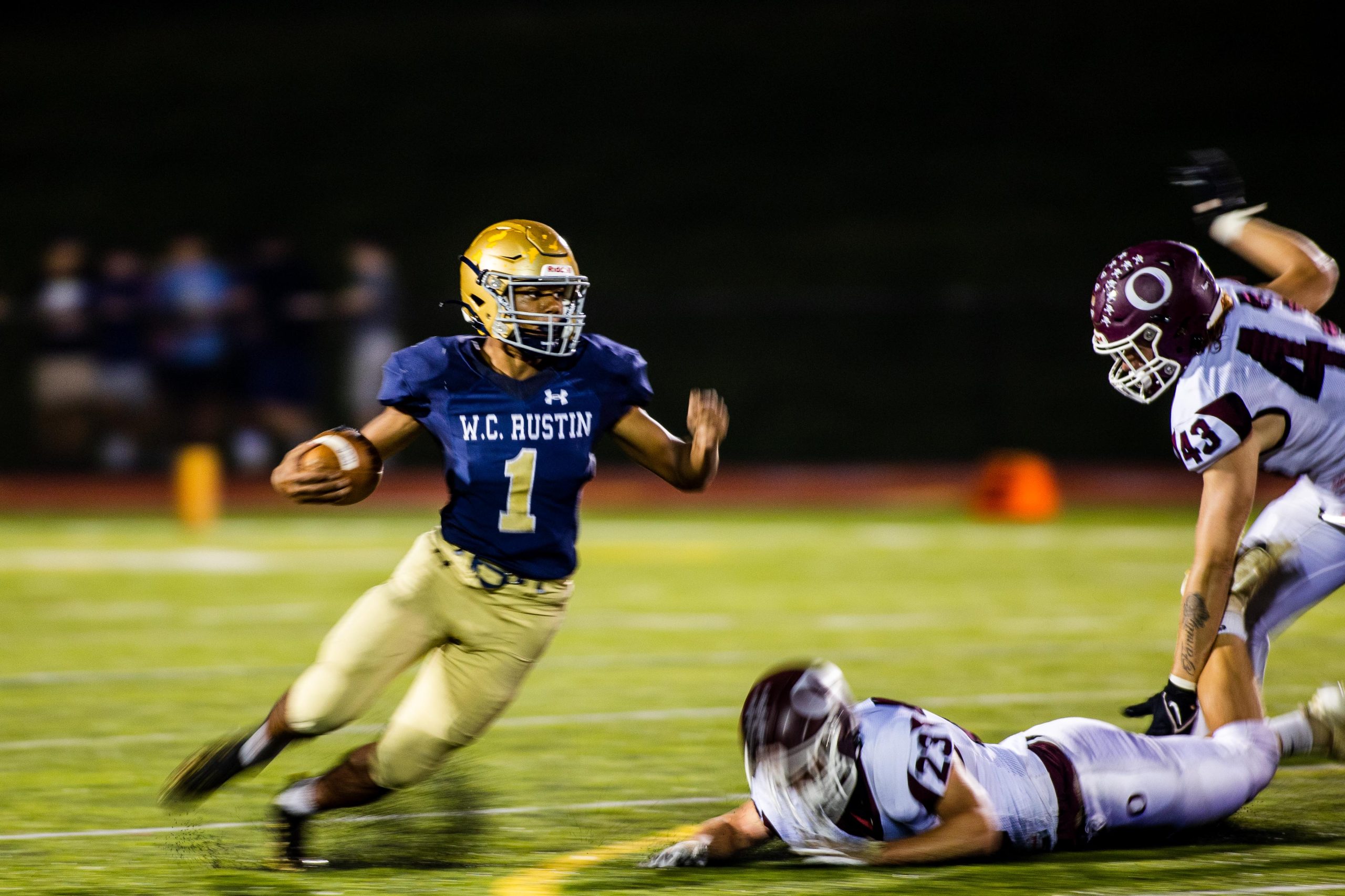 Westtown >> West Chester Rustin’s run-based offense purred along in its 41-21 win against Kennett in the District 1 5A quarterfinals Friday evening. Not once did the Golden Knights have to punt, and senior running back Dayshawn Jacobs ran for 325 yards and six touchdowns on 36 carries.
“We put in a couple of new wrinkles in the offense tonight,” said West Chester Rustin head coach Mike St. Clair. “We always stick with the hot back, and Dayshawn was hot tonight. The other backs were blocking phenomenally for him – two fullbacks leading the way. Our offensive line did a great job – Nick Impriano, Nate Miscichowski, Dan McNasby, Aaron Meadows, Jack Shoup and Alfredo Flores. And Dayshawn is strong – he lifts a ton [of weights].”
The 5-foot-9, 170-pound Jacobs becomes the new record holder at West Chester Rustin for rushing yards in a season (2,358) and touchdowns in a season (37) and he’s got at least one more game to add to it.
Jacobs smiled and said, “It was just a good night for football tonight, I was just doing my job and the holes were huge. It was just really fun tonight.”
Rustin’s 6-foot-1, 230-pound senior running back Anthony Meadows, one of the backs who were blocking for Jacobs Friday night, pointed to Dayshwan and said, “That’s my guy right there, I’ve got to set him up nice and make sure he gets in the end zone, make sure he gets some records (smiles). Everything started with the O-line tonight. When Chris Yanko and I are blocking for [Jacobs], no one gets through us.”
With the victory Friday evening, West Chester Rustin (10-1) will face No. 5 seed Plymouth Whitemarsh Nov. 19 in the District 1 5A semifinals. P-W defeated No. 4 seed Upper Dublin in overtime last night, 42-36.
Friday evening, Rustin took the opening kickoff against Kennett and scored on a 10-play, 77-yard touchdown drive – 10 consecutive running plays, capped by a two-yard plunge by Jacobs into the end zone.
Kennett (8-4), the No. 9 seed in the District 1 5A tournament, came right back and scored on a 61-yard TD drive. With senior quarterback Kalen Frazier at the helm, running and completing short passes, the Blue Demons tied the score at 7-7 on a drive that took 5 1/2 minutes off the clock.
The host Golden Knights then rolled off a 72-yard TD drive on eight consecutive running plays, the final one a 31-yard run up the middle by Jacobs, who spun off two potential tacklers at the line of scrimmage.
Five plays later, the Blue Demons gambled on a 4th-and-1 from their won 35 yard line, and were stopped at the line of scrimmage. The hosts soon capitalized when, on 4th-and-3 at the Kennett 28, Jacobs took a pitchout to the right and scored.
Then it was Kennett’s turn to come up with a big fourth down play for a touchdown. On 4th-and-4 at the Rustin 40 yard line, Frazier scrambled and hit senior wide receiver Luke Good down the left side for a touchdown to cut Rustin’s lead to 20-14.
The Blue Demons took the second-half kickoff and went for a seven-minute TD drive that culminated in a 3-yard scoring run by Frazier, which gave the visitors their first (and only) lead of the night, 21-20. Frazier completed several key passes on third down to keep the touchdown drive alive.
“Kalen has really grown at the quarterback position as an athlete,” said Kennett head coach Lance Frazier. “He’s [naturally] a receiver and defensive back, but took it on himself this year to make some plays with the ball in his hand under the center.”
“Kalen is the real deal,” said St. Clair. “Coach Frazier does a great job with that team. They have a great offensive scheme. Their defensive scheme really bogs you down – it was a tough matchup tonight. I’m just glad we were able to come out with a win.”
Nine plays after Kennett took a 21-20 lead, Jacobs broke a tackle and ran up the middle for a 22-yard touchdown to give the Golden Knights a lead that they wouldn’t relinquish.
After a three-and-out by Kennett (and the only punt of the game), the Golden Knights rolled down the field again, with Jacobs scoring on a 5-yard run to the left after breaking a tackle at the line of scrimmage. The hosts led 34-21.
Kennett’s next drive stalled at midfield, and Rustin took possession. With 1:38 left, Jacobs broke down the right sideline for a 42-yard TD run – his sixth and final touchdown of the night.
For Kennett, it was the end of a fine season.
“For our seniors, they wanted to play another week, and they played their hearts out for sure,” said Lance Frazier. “As seniors, that’s the way you want to go out if you go out, leaving it on the field and it’s a lesson to the young guys. We gave the No. 1 seed a good game tonight, it wasn’t a walkover.
“This group of seniors is actually the class this coaching staff came in with [in 2018], and they showed the younger guys how to be winners. They helped us build the program, they are the foundation.”
For Rustin, there’s at least one more playoff game scheduled for the 2021 season.
St. Clair said, “We’ve got a great group of kids and we’re happy to be playing one more week.”