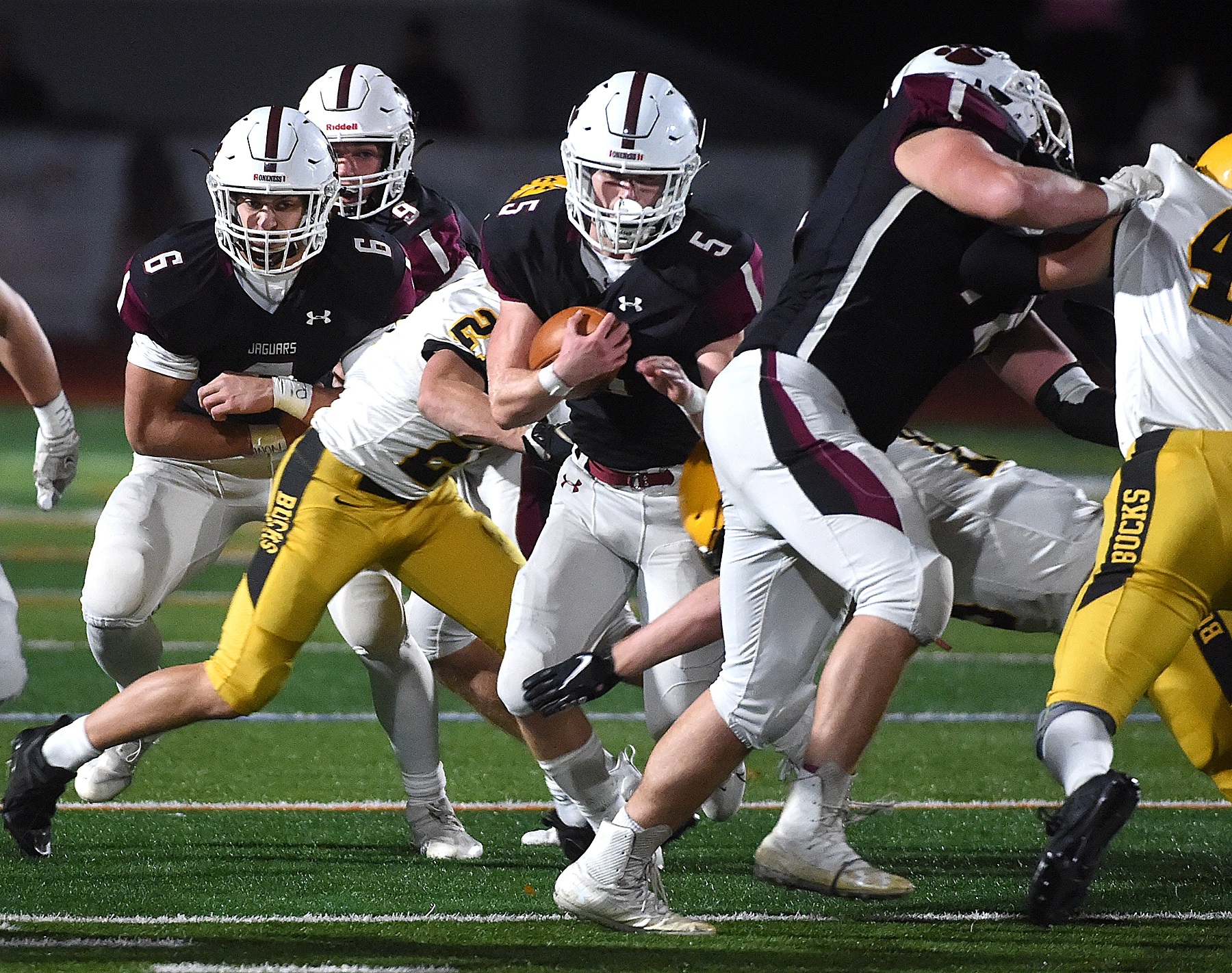 CONCORD — Matt Collins had a long road back this season.

The Garnet Valley senior went down on the first day of practice with a significant injury to his right knee. He put hours upon hours of physical therapy and work in the weight room. Collins missed the first nine games, but returned in time for the Jags’ regular season finale Oct. 30.

When the 5-7, 190-pound lineman intercepted a screen pass in the third quarter of No. 1 Garnet Valley’s 41-13 victory over eighth-seeded Central Bucks West, Collins’s eyes lit up, hoping he would score from about 35 yards out. Instead he was tripped up about 16 yards shy of the end zone.

“I choked just a little bit. Slipped up,” he said, laughing.

When GV coach Mike Ricci saw Collins come down with the pick, he was emotional.

“I almost was in tears when I saw Matt Collins get that interception because that kid worked so hard in the offseason for this season, and to have it taken away from him like it did was just crushing,” an emotional Ricci said. “For him to work like he did to come back, and to make some big plays in a big playoff game, my hat’s off to him. He deserves everything that comes his way.”

Prior to his interception, Collins had stuffed CB West rusher Vinny Cherubini at the line of scrimmage for no gain. Collins also was involved in a fourth-and-goal stand at the 1-yard line in the fourth quarter.

“It happened to me the first day of practice and I was devastated,” Collins said of his injury. “I worked so hard in the offseason and then it just… happened. I was kind of asking God, ‘Why me?’ After a few days of being grumpy and sad, I knew I had to get right back to work. That’s what I did, I just worked hard to get back.”

Garnet Valley (12-0) will return to Moe DeFrank next Friday to face No. 5 Quakertown in the District 1 Class 6A semifinal round. The Panthers (12-0) defeated fourth-seeded Downingtown East, 42-21.

Garnet Valley’s (32) Will Wrzeesniewski haul in a pass over the middle as the Jaguars recovered from a shaky start to defeat Central Bucks West 41-13 to advance to the District semi-finals at home next week.(PETE BANNAN – DAILY TIMES)

GV rode herd on the back of Shane Reynolds, who amassed 234 yards rushing and four touchdowns, after a shaky opening quarter. CB West dealt a blow to the Jags in the first minute of the game when quarterback Ganz Cooper connected with Conor McFadden for a 76-yard touchdown pass. The Jags thought they were having deja vu. In last fall’s Central League championship game, Marple Newtown executed a similar long touchdown pass on the first play of the game. GV then stormed back and won in blowout fashion.

“I thought immediately back to last year, the Marple game,” Reynolds said. “I looked around at everybody, the atmosphere and the feeling were the exact same. It was like we didn’t have to say anything. We were ready to get back onto the field. There’s momentum shifting plays… and we knew we could get it rolling again.”

Quarterback Max Busenkell hooked up with tight end Joey Halloran in the back of the end zone to tie the score. Late in the first quarter, GV was forced to punt, which is something it hadn’t done all year. A botched snap resulted in a punt of minus-10 yards, then Bucks running back Eli Boehm ripped off a 40-yard scoring run with two seconds left in the period. GV was down 13-7 and CB West was fired up on its sideline.

“We all believed in each other,” Reynolds said.

PETE BANNAN – MEDIANEWS GROUP
Garnet Valley’s Sean Gallagher hauls in a reception as the Jaguars take down C.B. West in the second round of the District 1 Class 6A playoffs.

After the first quarter, the Jags dominated the Bucks. The offensive line of Nolan Brennan, Austin Sorokanych, Sam DiTrolio, Ben Nash and Nick Mahoney controlled the point of attack and smashed the Bucks’ defensive front. Reynolds broke off huge runs off counters and pitches. His second TD was a thing of beauty — Neanderthal football, as the Jags called it — when he hit the edge and plowed over two defenders en route to the end zone.

“They got on the board early, but what impressed me with our guys was the reaction to that. Nobody was fazed,” Ricci said. “The kid who got beat on the touchdown pass then came back and made a big interception (Luke Lassik). We talked all week having to compete at a higher level than we have because this team was really good, I really like what they do. Our kids competed. We got punched in the mouth, but we fought back.”

The Jags took a 21-13 lead into halftime. By then, whatever good vibes CB West once had were gone and not returning. Reynolds hit the corner and sprinted 57 yards with 21 seconds left in the second quarter, a backbreaker for the Bucks. Reynolds had touchdown scampers of three and 47 yards in the third quarter. Ryan Saunders put the finishing touches on GV’s 18th consecutive victory with a one-yard TD run in the final minute.

Boehm had 85 yards on 15 carries and Cooper completed 4 of 10 attempts for 125. McFadden was the recipient of all four passes.