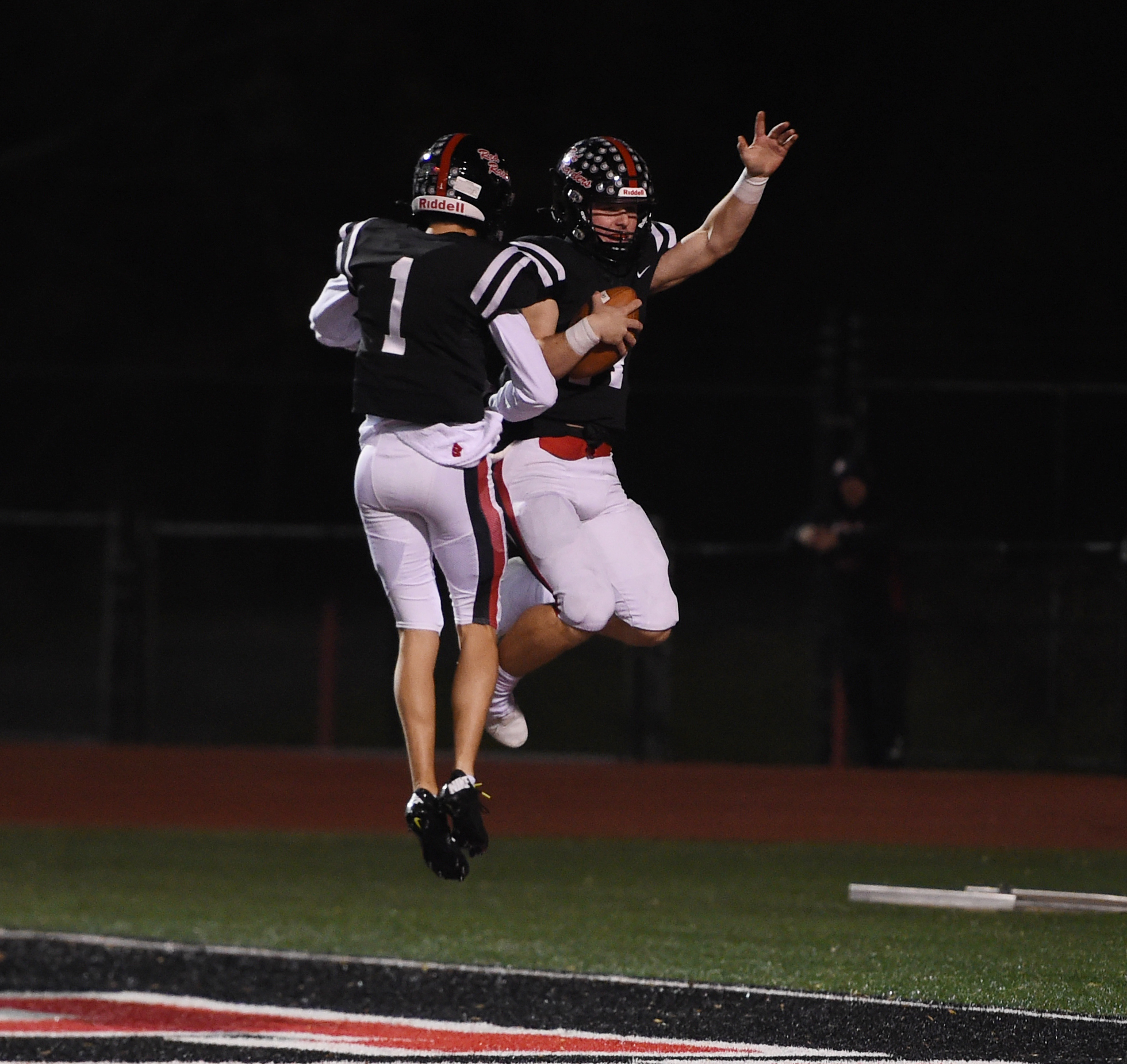 COATESVILLE >> If you polled people on how the Coatesville football team would win its District 1 6A quarterfinal against Perkiomen Valley on Friday, you probably wouldn have running the ball high up on the list of answers. But, run it, they did.

The third-seeded Red Raiders gained 344 yards on the night as they built a big lead and held on to turn back No. 6 Perk Valley, 35-30, at Coatesville Stadium.

“It’s just a special group up front,” said coach Matt Ortega. “They’re not as big as some in the past, but they play with a mentality. They’re nasty. They come out and work hard and they belive what coach (Mick) Bonner says. They believe in him and it shows when they come out here on Friday nights.”

The win was Coatesville’s ninth straight as they improved to 11-2. More importantly, it put them into the District 1 semifinals for the sixth straight year, and combined with Ridley’s overtime upset of North Penn, the Red Raiders will host the Green Raiders next Friday.

“It’s a testament to our kids and our program and the community,” said Ortega. “Everybody is so supportive year in and year out.”

This was a rematch of a week two contest which weirdly had almost the same final as Friday. Coatesville captured that contest, 35-27.

Coatesville took the opening kickoff and immediately established their superiority on the ground. They went 73 yards in five plays — all on the ground — to jump out to an early lead. Harrison Susi ripped off a 31-yard run to the end zone, aided by a vital block by RJ Rickabaugh to spring him.

A key play happened early in the second, Kohler hit Michael Poruban, who spun away and set sail for the end zone, but LeBron Bessick chased him down and punched the ball out at the 2. It went through the end zone for a touchback.

“I just used my speed,” said Bessick. “I saw he wasn’t holding the ball tight, I think he thought he was going to score and I punched it out.”

The Vikings (9-3) got on the board in the second quarter as senior quarterback Ethan Kohler found Ryan Klimek for a 12-yard score, but Klimek’s extra point was blocked.

Coatesville march down the field on the next possession and extended the lead as Tommy Ortega got body position on his defender on a slant and caught an 8-yard pass from Susi to make it 14-7.

They struck again with less than a minute left before halftime. A 45-yard pass to Bessick plus a personal foul put the ball on the PV 8. Susi ran it in on the next play for a 21-7 advantage at the break.
PV tried to do to Coatesville what was done to them. They took the second-half kickoff and kept it on the ground, but was to a 25-yard field goal by Klimek.

Ethan Kohler to Andrew Beck. 35-30 Coatesville with 1:35 to play. pic.twitter.com/Rzmq4amKZG

Susi passed Coatesville into another score later in the quarter. He lofted a pass to a streaking Ortega for a 30-yard score.

They added to the lead as Ashon Wesley invoked memories of Aaron Young. He was hit in the backfield, spun away, and sped off to a 44-yard TD to make it 35-9.

Perk Valley started its rally near the end of the quarter. Kohler hit Klimek for a 46-yard score.

“This is one of the class program’s of District 1,” Perk Valley coach Rob Heist said of Coatesville. “They have phenomenal football players. They play tough defense and execute on offense. They got talent all over the place. You can go toe-to-toe with a school like this, you’re doing something right.

“We have too much pride at Perkiomen Valley to go out like that (35-9), especially with this class of seniors, “It doesn’t matter the score, our kids are going to play until the last second. That’s the culture that we have at our school and I’m proud of how they played.”

Kohler added two more TD passes in the fourth, giving him four on the night. The last one came with 1:35 left on a screen to Andrew Beck. The onside kick was a low bullet that was corralled by Brendan Barthmaier and the Red Raiders ran out the clock.

Coatesville’s Ashon Wesley (4) makes his way toward the sideline on the way to a 44-yard touchdown run against Perkiomen Valley during Friday’s District 1-6A quarterfinal. (Owen McCue – MediaNews Group)