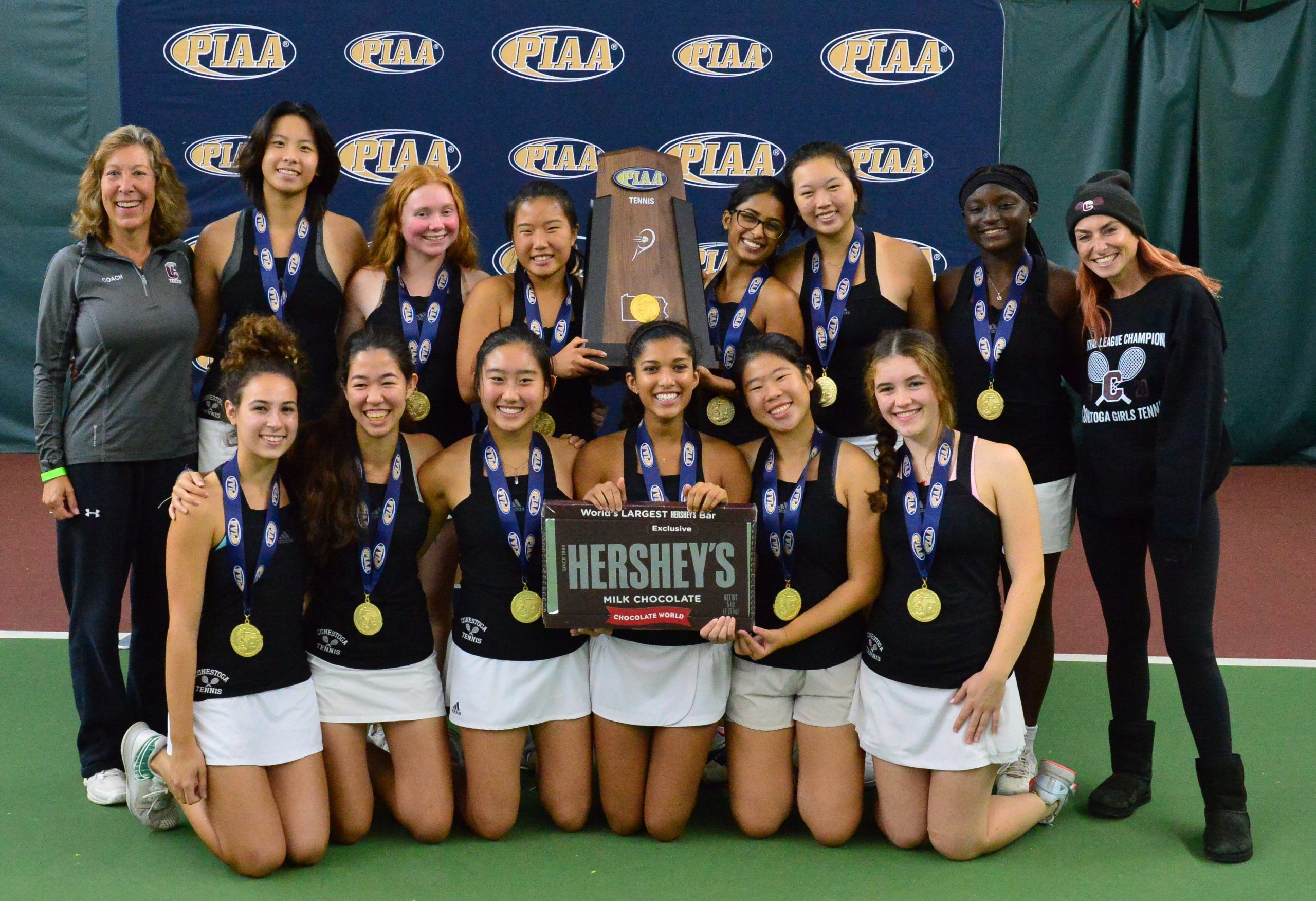 The Conestoga High School girls’ tennis team couldn’t be beat this fall, compiling a 22-0 record that led to the Central League title, a District 1 3A team championship, and finally, a PIAA 3A state team title.

On an individual level, the Pioneers’ top two singles players, seniors Leena Kwak and Ananaya Krishnan, bonded together to finish in second place at both the PIAA 3A state doubles championship and the District 1 3A doubles tourney.

“Leena and Ananya have a bond that is so admirable,” said Conestoga girls’ tennis head coach Brittany Aimone. “Over the last four years, I’ve watched their growth on and off the court and they have embodied the ‘family’ culture that we establish together. Not only are they best friends, they are truly sisters and are always looking out for one another.

“There is never a time during play that you can’t hear them cheering each other on – as well as cheering for their other teammates – in between points. They are fierce, but full of grace. They both equally want success for their teammates just as much as they want success for themselves. They inspire everyone around them, including myself, to be the best version of ourselves.”

Aimone said it was the family-type atmosphere among the Pioneers that made this team special.

“On our team, everyone is viewed as an equal,” said Aimone. “We are a team first and foremost. We stand in solidarity with one another. I believe it’s that sisterhood and family atmosphere that we create that contributes the most to our success. I try to create a culture where respect, kindness, humility and grace are values that are embodied by every player on the team, day in and day out. These girls are truly a family.”

In the 2021 PIAA 3A state team tourney, Conestoga opened with a 5-0 win against District 3 third-place finisher New Oxford, 5-0; defeated District 7 runnerup Greater Latrobe 4-1 in the state quarterfinals; beat District 1 fourth-place finisher Spring-Ford 4-1 in the state semifinal; and completed their undefeated run with a 4-1 victory against Unionville in the championship finals Oct. 30. Twelve days earlier, the Pioneers defeated the Longhorns, 3-2, to capture the District 1 3A team title.

The final four teams in the PIAA 3A girls’ tennis state tournament were District 1 squads – Conestoga, Unionville, Pennsbury and Spring-Ford. The Pioneers faced Spring-Ford as well as Unionville in both the district and state tourney.

“Having four District 1 teams in the state semifinals is incredible,” said Aimone. “It just goes to show how strong our tennis community is. We faced both Unionville and Spring-Ford twice, and both teams have a lot of talent and the sportsmanship displayed by everyone was admirable. It was a pleasure to watch.”

Conestoga’s depth proved powerful in the PIAA 3A state semifinal, as the Pioneers won all but the first singles match in straight sets – the winners were Krishnan at second singles (6-0, 6-1), sophomore Kate Emmanuel at third singles (6-1, 6-1), senior Felicia Manful and junior Bella Chen at first doubles (6-4, 6-3) and sophomores Melissa Fan and Jennifer He at second doubles (6-2, 7-5).

“Kate has a beautiful game,” said Aimone. “Watching her play is like watching a well-orchestrated dance. The way she moves across the court is magic. Her on-court confidence and work ethic are great.

“Felicia and Bella have a very strong mental game. They are able to pull each other up if one is feeling down and know each other’s game through and through. They both have a truly humble attitude, which is a wonderful trait to have on-court. Not only are they partners, they are best friends and you can see that on the court.

“Melissa and Jennifer always have smiles imprinted on their faces. They genuinely have so much fun together on court and are so enthusiastic about growing and learning as players. They, too, are best friends and it really makes all the difference in partners.”

While the Pioneers will lose Krishnan (verbally committed to Vassar), Kwak and Manful to graduation in the spring, Conestoga will return many players from this year’s state title team next fall.

“What I hope our underclassmen take forward from this championship is that there is a lot of good things to come within our program,” said Aimone. “Beyond that, I believe each year is a clean slate. My hope is that the girls come out with the goal of bettering themselves every day, which I believe will give them the best opportunity to succeed.”