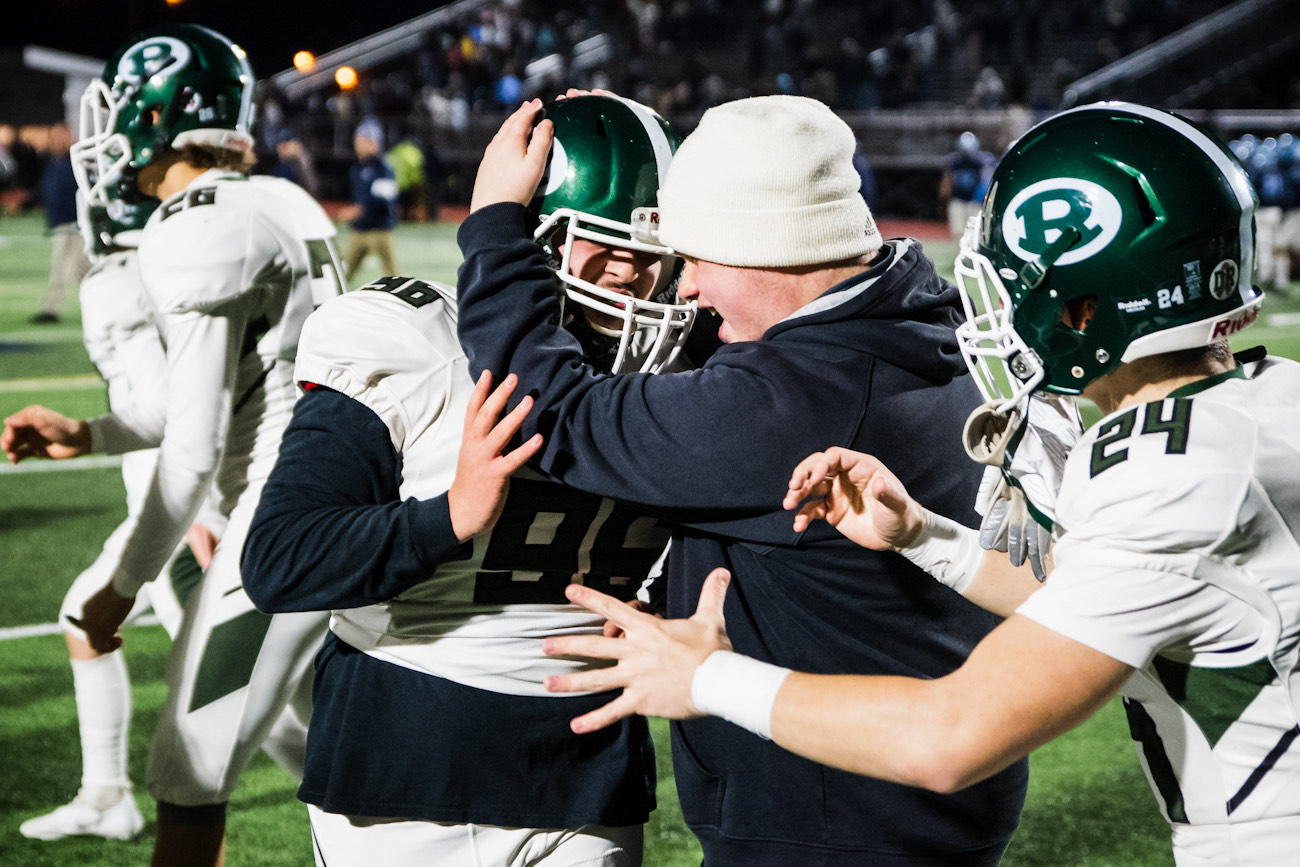 TOWAMENCIN >> North Penn and Ridley spent Friday night engaged in an offensive slugfest and the result after four quarters was that both football teams had put 49 points on the scoreboard.

In overtime, it was extra-point execution that finally settled the District 1-6A quarterfinal contest at Crawford Stadium.

Khalani Eaton put the host Knights ahead on the first play of the extra session with his 10-yard touchdown run but Stephen O’Donovan blocked the point after try, keeping the Raiders’ deficit at six.

Ridley found the end zone on its possession as Tahir Mills hauled in a nine-yard TD from quarterback John Heller, giving kicker Nick Volpone the chance to seal the victory.

The senior missed on a go-ahead field goal try from 36 yards out in the final seconds of regulation, but his extra point in OT sailed through the uprights, sending the No. 7 Raiders to the semifinals with a 56-55 upset victory over No. 2 North Penn.

“I knew for the boys I had to come through and secure the win,” Volpone said. “It’s been a while since we won at North Penn, they gave me another opportunity and I knocked it home.”

Mills’ touchdown catch was the last of his five touchdowns, the senior running back ending the night with an astounding 337 yards and four scores on 42 carries as Ridley (11-1) survived the Knights’ fourth-quarter rally to earn its first semis appearance since 2009 when the Raiders won the District 1-4A title.

Eaton ran for 157 yards and four TDs on 19 carries while Ethan Spann finished with 125 yards and two touchdowns on five carries as North Penn (11-1) had its 15-game winning streak stopped and were denied their first trip to the semifinals since 2018.

“I thought the kids really played hard,” Knights coach Dick Beck said. “I’m sure it was a great game to watch, it wasn’t a great game to coach in. But we learn from it but I think the kids, this team really bonded well and worked hard and it was a fantastic year.”

Ridley advances to visit No. 3 Coatesville – which defeated No. 6 Perkiomen Valley 35-30 – with the winner meeting either No. 1 Garnet Valley or No. 5 Quakertown in the district final.

“I told the kids, this was only going to end in one overtime,” Raiders coach David Wood said. “We just needed a coin toss of playing defense first cause that was an unbelievable block by O’Donovan, we saw something a little bit this week, we got the block but if we didn’t we would of went for two and the game would have been over at that point.

“We couldn’t line up with them and go toe-to-toe and we learned kind of our lessons in the Garnet game earlier in the year, we’re just not big enough for that. We got to be a finesse team.”

Mills collected 158 yards and three TDs on 20 first-half carries then went for 178 yards and a touchdown on 22 rushes after the break. He posted five runs of 29 yards or more, his longest a 56-yarder late in the fourth.

“It was just power up the middle and then we go outside on their DBs,” Mills said. “So I think my o-line went out there and just put their heart on the line and then our receivers blocked their asses off so that’s what it was.”

Heller was 14-of-19 passing for 187 yards with one touchdown and one interception. Sean Harrington caught seven passes for 66 yards.

“When you’re running the football it creates one-on-one and Heller’s done a great job in the passing game over the top,” Wood said.

North Penn quarterback Ryan Zeltt finished 10-of-14 passing for 130 yards with one touchdown and one interception. Levi Carroll had five receptions for 85 yards and a touchdown.

Nahaj Saleem’s 18-yard interception return for a touchdown gave Ridley a 49-35 lead with 1:20 left in the third quarter. North Penn responded with a TD on its next drive – Eaton scoring from nine yards out at 10:48 in the fourth – then forced a Mills fumble to get the ball back with 6:59 remaining.

Ridley’s Tahir Mills (4) leaps over North Penn’s Ronnie Major (19) on his way to the end zone in their District 1-6A quarterfinal on Friday, Nov. 12, 2021 at North Penn High School. (James Beaver/For MediaNews Group)

The Knights needed just one play to knot things at 49 as Spann burst through the line, made a cut in the secondary and raced away for an 82-yard touchdown at 6:44.

Ridley drove to the North Penn 24 but turned the ball over when Heller’s pass on 4th-and-14 from the 34 was picked off by Jay Ford King at the three.

An unsportsmanlike penalty on the Raiders had the Knights starting their series at the 18 at 4:22 but NP went three-and-out – Luke Smeltzer’s 56-yard punt putting Ridley at its own 19 with 1:46 to go.

“I thought we could run it at them, so when we got the third down I thought we were close enough that we could run the ball,” Beck said. “I mean the play call was pretty weak. I was afraid of any aggressive stuff to get it intercepted or turn it over. I was trying to put together a couple first down, get to the 50-yard line and then be aggressive.”

Mills, however, put the Raiders in scoring range by dashing down the left side for 56 yards. Ridley could only pick up six more yards and opted for a Volpone 36-yard field goal with 18.3 seconds remaining that went wide left.

On the first play of overtime, Eaton ran left and found the end zone from 10 yards out. But O’Donovan came off the right edge to block the extra point, leaving the Knights lead at 55-49.

“I think we just kind of relaxed on the weak side,” Beck said. “And the kid came off the edge and did a nice job blocking it.”

Two Mills runs totaling just a yard gave Ridley a 3rd-and-Goal from the nine. Mills leaked out of the backfield to catch a pass from Heller and get over the goal line to make it 55-all. Volpone knocked through the extra point and the Raiders stormed the field in celebration.

“It’s good to have a short memory cause you’re going to get opportunities here and there,” Volpone said. “Mine came, I missed one and then came again and I made it. One for the team.”

Ridley took a 7-0 lead on Friday’s opening drive – Mills capping the eight-play, 59-yard series with a four-yard TD run at 9:21 in the first quarter. North Penn responded with a seven-play, 58-yard drive Eaton ended with his two-yard touchdown run at 6:18.

North Penn’s Ethan Spann (6) breaks away for a long touchdown run against Ridley during their District 1-6A quarterfinal on Friday, No 12, 2021. (James Beaver/For MediaNews Group)

Mills hurdled a defender going down the sideline on a 17-yard touchdown run to finish a 12-play, 77-yard drive for a 14-7 advantage with 54 seconds left in the first quarter. The Knights were back level when Spann powered through tackle attempts then dashed to the end zone for a 31-yard TD run with five seconds left.

The quarter’s scoring, however, was not done as Khameen Powell found a seam up the middle on the ensuing kickoff then sprinted down the right side for an 81-yard kickoff return TD as time expired in the period.

On a 3rd-and-9 from the Ridley five, Heller hit Kimir Stephenson over the middle for a 35-yard completion. Three plays later, Mills sliced through the line and found open space on the left side for a 42-yard touchdown for a 28-14 Raiders lead at 5:59 in the second quarter.

“He’s doing a great job cutting it back so they were going one way and he was finding the hole on the back side,” said Beck of Mills. “I mean that’s the key to the zone. You look like you’re going one way and you get a little seam on the backdoor and he cut it back. You can’t reach out and grab him. If you don’t hit him with a shoulder you can’t tackle him, he’s really strong.”

#FOOTBALL: 54.0 seconds 1Q @hs_ridley 14, @NorthPennKnight 7. Tahir Mills hurdles a defender as he goes down the sideline for a 17-yard TD run. pic.twitter.com/Cma9kp8adc

The Knights forced a Mills fumble to regain possession at the 50 with 1:18 in the half. Zeltt connected with Carroll down the left sideline for a 33-yard touchdown – Carroll making the catch despite tight coverage as the Knights were even 28-28 with just 8.6 seconds before the break.

Eaton broke a 54-yard run on the third quarter’s first snap and Michai Cuffie scored the following play on a 10-yard run, giving North Penn its first lead at 35-28 at 11:12.

Ridley went back ahead in a span of just 10 seconds on the game clock. A Mills’ one-yard TD run tied things back up at 8:24. The Raiders recovered the ensuing kickoff and on the next play Heller hit a wide-open Paul Jackson down the left side for a 37-yard TD at 8:14.

Saleem put Ridley up 49-35 as he jumped to block a Zeltt pass and came down with the interception then ran to the end zone for the 18-yard pick six with 80 seconds left in the third.