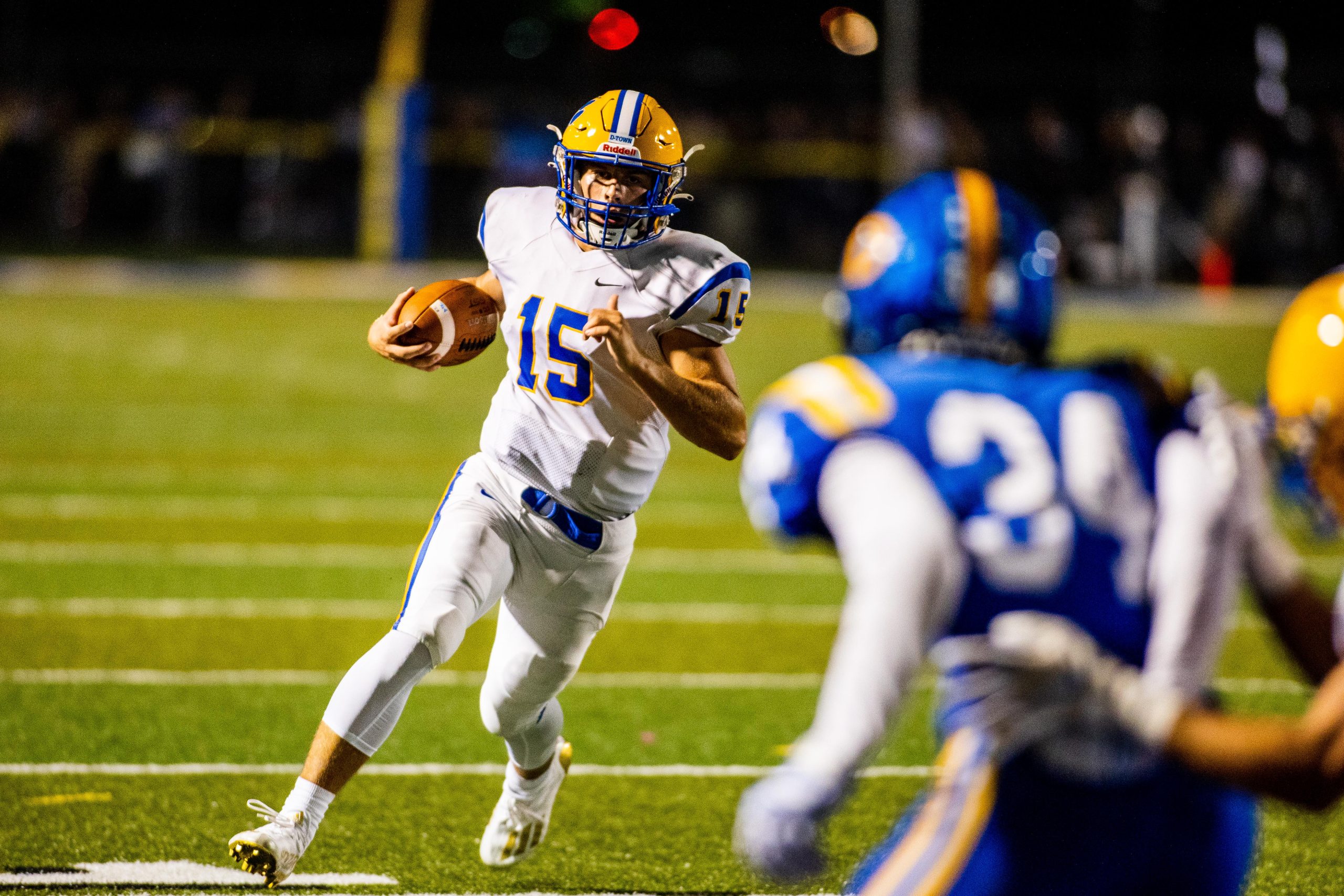 DOWNINGTOWN- Come district playoff time if a team takes its opponents bread and butter away it is going to be a long night for that team. Friday night at Kottmeyer Stadium in the second round of the District 1 6A playoffs, visiting Quakertown held the ground and pound hosts, Downingtown East to just 52 yards on the ground and the Panthers outscored the Cougars 14-0 in the second half to take home a 42-21 win. Quakertown will now head to Garnet Valley next week for the semifinal round while the Downingtown East season ends at 9-3. The Cougars average close to 210 yards rushing per game before Friday night.

“I was afraid they were going to be able to stop our running game,” Downingtown East head coach Mike Matta said. “But, they did a better job than I even thought they would do. We knew they were very good and they played up to that. They really beat us up, out played and out coached  us tonight.”

The teams looked like they were going to set a stadium record for points early in the game as the two teams traded miscues that led to a 14-14 tie after one period. Quakertown (12-0) started the scoring when they blocked a Cougar punt and Brett Hileman fell on the ball in the end zone for an early 6-0 lead.

Downingtown East (9-3) came right back and Jamy Jenkins hit CJ Leo with a pretty 15 yard flatter in the corner of the end zone for a 7-6 Cougar lead. the, the Panthers made their mistake. quarterback Will Steich fumbled the ball and Sean Conlon scooped it and rambled 22 yards to give the Cougars a 14-6 edge. But, the Panthers got a 13 yard touchdown run from Tyler Woodman to knot things up at 14-14 after one period. Woodman carried the ball 31 times for 162 yards on the night.

“I like a lot of carries,’ Woodman said. “It really gets our offense going.”

The Panthers offense was purring now as Woodman was gaining yards between the tackles and Stretch hit John Eartherton with a pretty 37 yard pass to make it a 21-14 Quakertotwn lead early in the second period. Downingtown East came right back and went on a 67 yard scoring drive that culminated in a five yard touchdown catch by Louis Rossetti in the flat as Jenkins led his receiver perfectly and it was a 21-21 game.

Late in the second period, it appeared the Cougars had forced a punt but a personal foul penalty on the Cougars allowed the Panthers to keep the ball and go on a 87 yard scoring drive that resulted in a 24 yard touchdown pass from stench to Zach Fondl, who outfought a Cougar defender for the ball in the end zone and the Panthers had a 28-21 halftime lead.

The Quakertown defense then shut all doors and windows for the Cougars in the second half. The Panthers forced four second half Cougar punts and without a running game, Jenkins was under extreme pressure as the Panthers just pinned their ears back and went after the Cougars quarterback sacking him there times and hurrying many of Jenkins throws.

The Panthers running game then took over as they milked the clock with Woodman gaining first downs after first down. The Panthers had 22 first downs for the game compared to just 10 for Downingtown East. Woodman scored on runs of 12 and three yards in the second half for the 42-21 margin and the Cougars season was over.

“They just seemed to play harder than us in the second half,” Jenkins said. “And we could not run the ballad that was a surprise because that is what we do. And if you can’t run the ball nothing really works.”