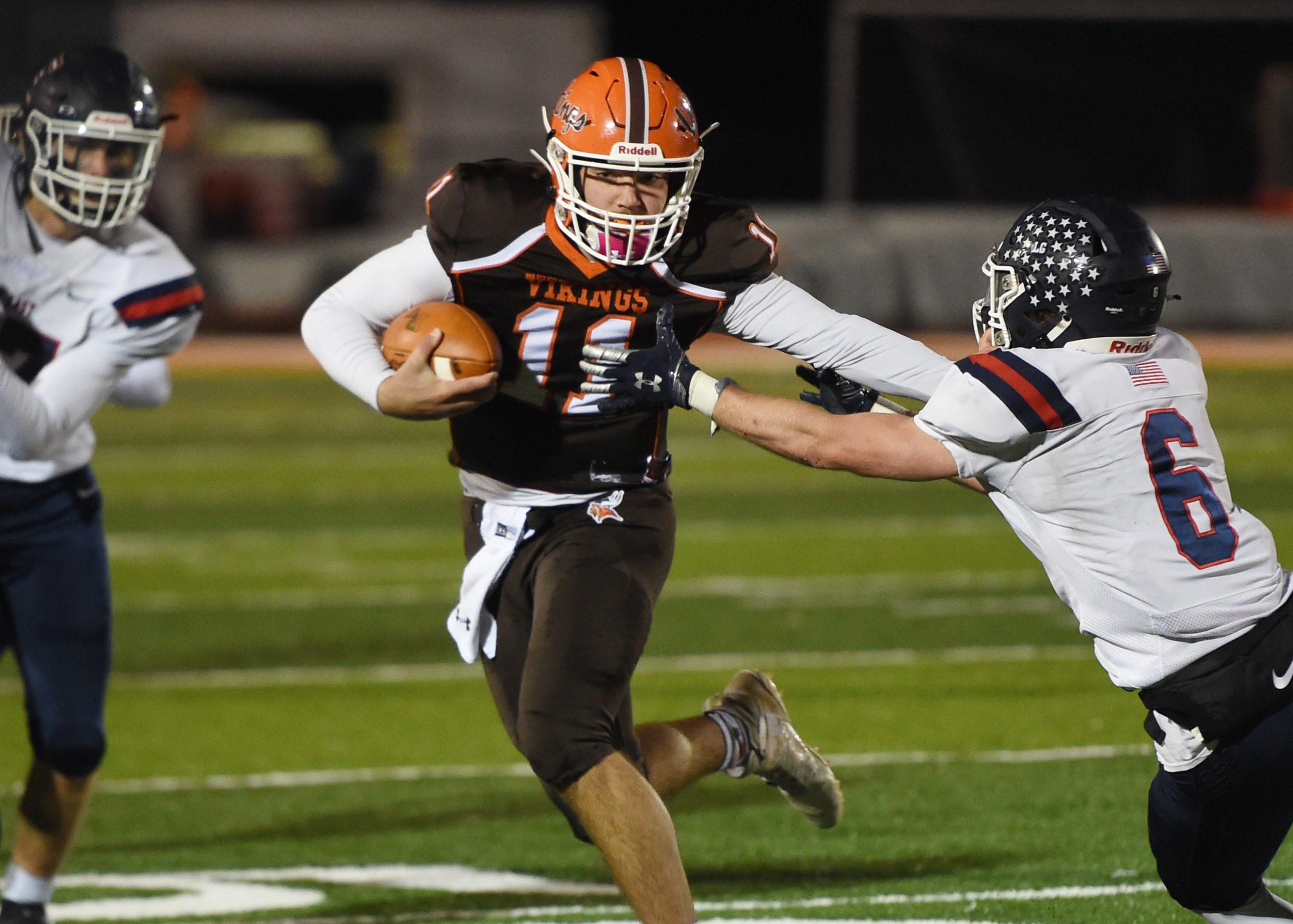 It’s not often a team gets a second crack at another during a high school football season.

Even against league counterparts, it usually takes up to a full year to avenge a loss.

The sixth-seeded Vikings (9-2) travel to third-seeded Coatesville (11-1) in the District 1 Class 6A quarterfinal, hoping to alter the result of a 35-27 defeat to the Raiders in Week 2 this season.

“They’re top competition and that’s what we wanted to face in our out-of-league schedule to prepare ourselves for the District 1 playoffs,” said PV senior quarterback Ethan Kohler said. “They’re a great team and we figured they’d be deep in the playoffs wherever they went up against.

“We’re just coming into this with a fresh start, not trying to hype up anything, not trying to make the rematch anything bigger that what it is. It’s just we gotta do our job and whatever team plays better Friday night, that’s what matters.”

Perkiomen Valley looked poised to earn the program’s first-ever victory over Coatesville after the first 30 minutes of their Week 2 matchup Sept. 3.
The Vikings scored two late touchdowns in the first half to go up 27-14 at halftime before Coatesville blanked Perkiomen Valley in the second half and reeled off 21 unanswered points to walk away with the win.

Perkiomen Valley receiver Dawson Debebe races toward the end zone on a TD reception during the first half against Boyertown. (Austin Hertzog – MediaNews Group)

“We were excited coming into the first half, and we just came out in the second half slower,” Debebe said of his memories of the early season loss. “We just have a few things to clean up.”

“We’re super excited,” he added. “We were fortunate enough to be close (in the first meeting) and now we’re ready to get another shot at them.”

Junior quarterback Harrison Susi was a bit of an unknown for the Vikings’ defense in the first matchup when he passed for 155 yards and also ran for a team-high 114 yards and all three Coatesville second-half touchdowns.

Susi’s dual-threat nature is well-established at this point in the season. He’s completed 81-of-161 passes for 1,382 yards and 21 touchdowns, while tossing just two interceptions. His ground game is equally impressive, rushing 148 times for 958 yards and 15 touchdowns.

Coatesville’s Harrison Susi waves to the Downingtown West crowd in the waning seconds of a 31-28 win. (Nate Heckenberger – For MediaNews Group)

“Their deep balls, they love to go deep, those 40-yard fades, and then we’re ready for their quarterback to be running a lot more than we thought he was going to be (in the first game),” PV senior linebacker Bryan Helenski said. “They’re a good team.”

Perkiomen Valley counters with plenty of offensive firepower of its own, averaging over 40 points per game.

Senior quarterback Ethan Kohler is 132-for-197 for 2,080 yards, 24 touchdowns and four interceptions through the air and is a bruising rusher with 104 carries for 540 yards and 12 touchdowns.

“We’ve expanded our playbook, we’re more precise with everything, we’ve fine-tuned everything, and our defense has grown greatly over the season as well,” Debebe said.

The growth of the Vikings’ defense, which had a streak of 15 scoreless quarters snapped in the second period of last week’s win over Central Bucks East, is what’s turned Perk Valley into a well-rounded group.

“We switched up the adjustments for our defense a lot the second time around because we can’t have what happened to the second half (against Coatesville) to our defense again,” Helenski said. “It’s great to have a second shot.”

Coatesville has been arguably the class of District 1 Class 6A football, posting a 14-3 mark in district games over the past half decade.

Under the guidance of head coach Matt Ortega, the Red Raiders have gone to at least the District 1-6A semifinals in each season since 2016, finishing as the runner-up in 2019 and winning back-to-back titles in 2017 and 2018.

Before defeating Perkiomen Valley earlier this season, the teams hadn’t met since 2008 and 2009, both Red Raider wins.

“They’ve been dominant for the past couple years,” Helenski said. “It would be great to be the first PV team to beat them.”

Perkiomen Valley’s last trip to the semifinals came in 2016 when Coatesville was beginning its District 1 dominance. The Vikings have just two district playoff wins since that season, winning first-round games in 2017 and earlier this season.

Perkiomen Valley’s Ryan Klimek rushes into the end zone for a three-yard touchdown in the second quarter against Spring-Ford. (Austin Hertzog – MediaNews Group)

Kohler remembers watching the 2016 group, which his cousins played for. He and the current crop of Perkiomen Valley players are just one game away from getting back there.

“I remember watching guys like Rasaan (Stewart), Stephen Sturm and Jaws (Justin Jaworski) and all those teams,” Kohler said. “It’s definitely special, something our seniors have really worked for. Our goal has always been to keep moving forward, taking it week-by-week and we’re very fortunate for where the past weeks have brought us.”