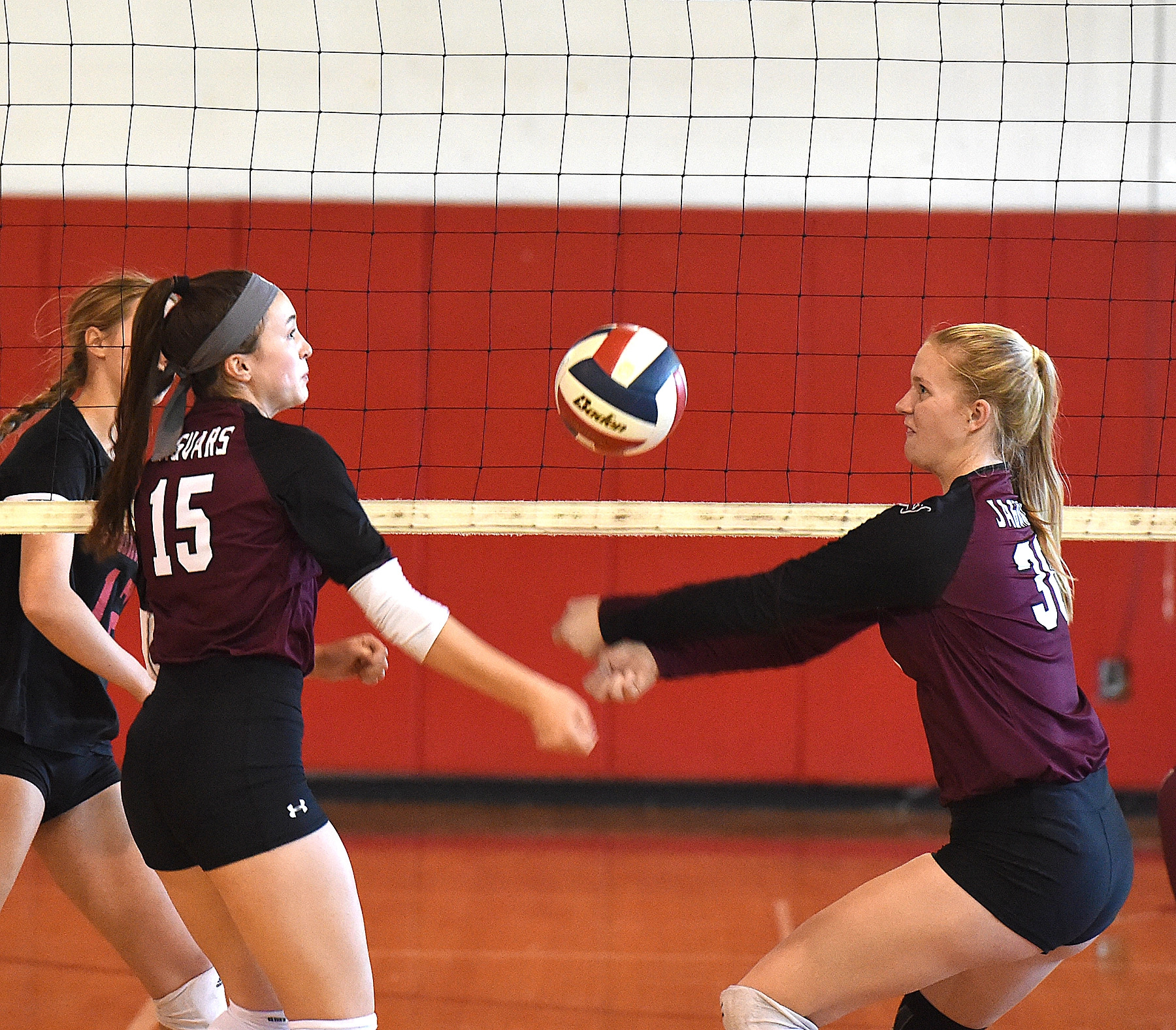 Garnet Valley's Klaira Zakarian, left, and Katelyn Dugery scramble to keep a ball off the floor in Tuesday's PIAA Class 4A opener. Dugery led the way with nine kills in a 3-0 win over Archbishop Carroll. (Pete Bannan/MediaNews Group)

RADNOR — Even before the first serve Tuesday, Garnet Valley’s PIAA tournament was already off to a sub-optimal start.

Whatever coach Mark Clark envisioned for the state Class 4A opener at District 12 champ Archbishop Carroll, it didn’t involve helping starting middle hitter Sarah Weins off the court in warmups with an ankle injury. It didn’t involve Weins playing spectator, her ankle iced and her shoe off, with the season on the line.

Ultimately, it wouldn’t matter much in the Jaguars’ 3-0 romp. But with the possibility of District 1 champ Bishop Shanahan looming in Saturday’s quarterfinals, getting whole quickly would be ideal.

“Definitely not how we want to start states,” said Katelyn Dugery, Weins’ fellow middle blocker. “Sarah’s obviously a really great player and really important to the team. But everyone did a great job stepping up. … We were prepared. Obviously it’s not what we wanted to happen, but we were able to take care of it.”

The Jaguars (20-3) didn’t miss much Tuesday, rolling by game scores of 25-11, 25-11 and 25-5. They adapted on the fly, with MaryPearl Tienabeso stepping into the middle from her outside hitter role. Save for a brief blip in the second set, the Jaguars did what they wanted, challenging Carroll’s backline on serves and putting away the copious free balls they got as a reward.

Dugery led the attack with nine kills and a block. She also provided the five-point service run to open up a 9-2 lead in the first set that Garnet Valley didn’t relinquish.

Katelyn Dugery the kill. Maddie Wood sets it up on a platter. 17-7 GV pic.twitter.com/q1CbmvII90

Tienabeso had seven kills and two blocks, including a solo put-away in the middle of the second set. Kelly St. Germain added six kills, and Klaira Zakarian contributed five.

Any discomfort in the adjustment was handled, thanks to the veteran setting of Maddie Wood. She handed out 26 assists, punctuated by one devastating tip kill per set. The chemistry with her hitters is such that Dugery doesn’t need to spend much time discussing how to adjust absent one weapon, even as big of one as Weins.

GV libero Maddie Snelgrove had two of her four aces in a six-point service run to put away the first set. Carroll opened with five straight points in the second, including an ace by setter Maggie Quinn. But the surge proved short-lived.

“I think once we got on the sideline and realized, ‘OK we’ve got to get it together,’ we were able to pull it together,” Quinn said. “We tried to go on a few runs serving-wise, and a few of my teammates went on runs, so that was one of our goals.”

Mia Straface provided a spark late in sets with three aces, and Paige Gibbons supplied three kills on the left, but the Patriots couldn’t sustain any momentum.

A pair of aces by Zakarian got GV on level terms at 6-6 in the second; they’d win 44 of the final 54 points to close it out quickly. Zakarian had two kills on Sokalsky’s seven-point service run, then Dugery tucked away kills for three of GV’s first eight points in the third.

With the bullet dodged in the opener, the Jaguars can turn their attention to what they must do in this tournament, with or without Weins.

“I think we’re just going to have to work a little harder in practice,” Dugery said. “We did a good job stepping up, but we don’t know if Sarah will be back by then. So (it’s) working on the people we have on the court and getting used to that.”

Wood with the textbook back set to Abby Houpt for the cross court put away. GV up 9-7 in the second pic.twitter.com/xb0TI5EDVF